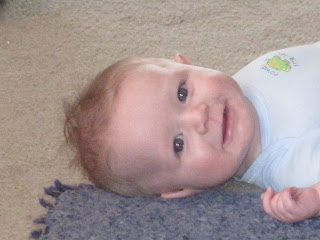 Last Thursday my baby boy celebrated his four month birthday. I can't believe it! Everyone said it would fly by...what an understatement. It seems like just yesterday Eric and I were fighting over whose turn it was to take the 3am feeding. Now we argue over who gets privilege of getting him out of the bed in the morning. (I'll explain later) My how the tables have turned! The thing that amazes me the most about my baby is his personality. So to all of you who have never met my little man, I can honestly say that pictures are not worth a thousand words. At least not in the case of Mr. Elijah Harold Watson. So, I would like to take you behind the pictures and introduce you to my boy.

Every morning Eli wakes up cooing; never crying. One of us will quietly slip into his room and stand beside his bed until he looks up and sees us. Then this huge, gummy smile spreads across his face and his eyes light up. He is so excited to see his mommy and daddy and probably even more excited to get to eat. Like is parents, Eli too is a foodie. He loves his bottle and since introducing him to cereal he cries between bites; we can't get it into his mouth fast enough! In fact, the only time Eli ever throws a crying fit is when he's hungry. 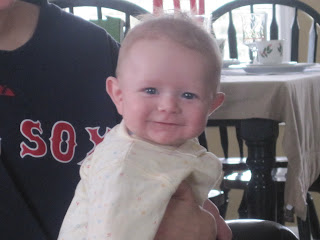 Eli's favorite past time to date is lying in the floor playing. He talks and coos to whoever or whatever will listen. Most recently he talks to the toy frog that is attached to his car seat. Another favorite companion is the television. We don't like to use it as a babysitter, but with him responding already, the television buys us time to cook dinner. His favorites are Baby Einstein and any basketball game on TV. Needless to say that being the only woman in the house with two boys who love basketball, we watch a lot of ESPN.

I could go on on about my little man, but in fear of boring you I'll be brief. Eli has brought me more joy than I ever thought possible. His smile is precious, his laugh is musical and nothing can compare to being his mommy. There are stressful days, there are frustrating days but nothing can take away the joy I've experience throughout the past four months of blessings.