I Love telling stories, even though some are slightly embellished; it's a southern thing! Anyway, I often document our life through pictures and captions, but I never really tell a story. That being said, every now and then I will have Story Time With Eli to let you know what this crazy little man has been up to.

We have for a long while called Eli "Dennis The Menace." If you remember the clever little fellow who made Mr. Wilson's life, well interesting, you might recall his hairstyle. Sort of shaggy blond with a major cal-lick on the side. Eli's grows the exact same way. You couple that with Eli's antics and you have "Dennis Jr." You'll agree after you hear (read) these two stories. 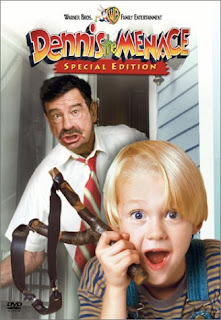 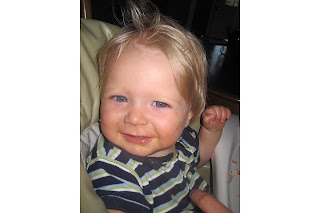 I normally leave Eli in daycare all day on Mondays so that I can go to the grocery, get my housework done and then have the rest of the week to play with him (aside from small daily tasks.) Of course yesterday was a holiday and tomorrow is his surgery, so I braved the grocery store with this little man. All went well until checkout.
While I was putting the groceries on the conveyor belt, Eli somehow managed to get into the grapes. Knowing he is a little "Dennis The Menace" in training I was keeping and eye on him and caught on his scheme rather quickly. I pried the little fruitletts from his hand while he proceeded to make a scene by throwing a mild, yet embarrassing temper tantrum. What I didn't realize was that he had already put one of the grapes in his mouth...he only has three thee ya'll. Not Good!

He starts gasping, hacking, and coughing! (I think he got the drama gene) I knew immediately what had happened, so I stuck my Wal Mart, germ infested, index finger down his throat and pulled it out. I kid you not it was the scariest moment of my life! All is well that ends well because after that we moved to blueberries, a much smaller and more throat friendly fruit.
I think people must wonder about the "tv lady" who goes to Wal Mart with gobs of make-up on, in sweat pants, and sticks her finger down her baby's throat...ha!
Fast forward to bath time and things got interesting again...
______________________________________________________ 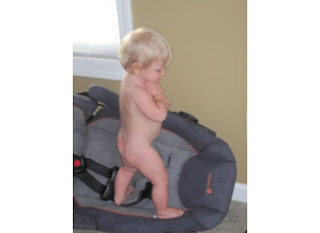 Since his birth Eli has loved baths and continues to look forward to getting clean every night. Recently he has taken a liking to drinking the water...so gross. So, I have had to take anything that can scoop, hold, or contain water away from him. Tonight was no different, except I forgot one thing...the bucket.

We use this particular contraption every night to rinse away the shampoo. Well, while I was getting a wash cloth Eli filled the bucket full of water, held the thing up like a sippy cup and proceeded to take a drink. You can guess what happened next.
The whole bucket full of water pours all over Eli's face, up his nose and in his mouth. He threw the biggest gagging, coughing fit you have ever seen (minus the one in Wal Mart.) It was the funniest thing I have ever seen...since he was ok of course!
_________________________________________________
Eli is in bed now and I'm sure resting quite well after such an eventful day. I tell you what, I so enjoy this little guy and all the things he does. I'm excited about documenting some of them here from time to time. Sometime I'll update you on the time he fell out of the baby swing, projectile vomited in Chick-fil-A, and threw a golf ball in my china cabinet.
Until then, I hope you enjoy the antics of my personal "Dennis The Menace" and this first installment of Story Time With Eli.
at 8:26 PM