I would like to report that in the last two weeks Eli has been seen by the doctor twice, has been on four medications, has cut a tooth, and has missed more days of daycare than he's been. So, you'll excuse my blogging absence once again. Now that I have returned, I would like to share with you some pictures from our Christmas with my family....Told you it was late! 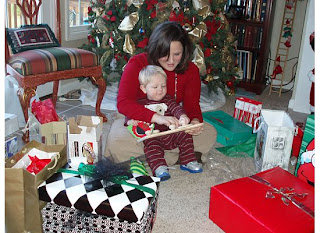 Eric was sick with a terrible sinus infection that he got from me and I got from Eli...all from daycare...boo!! Anyway, Eli and I ventured to Lexington alone for New Year's and a belated Christmas celebration. 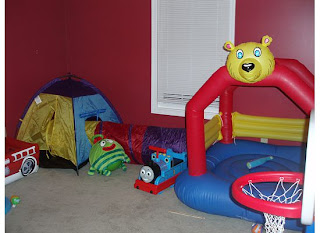 As you can see from the above picture, Eli had quite the Christmas. In fact, it was so big that we turned out guest room into a playroom. Oh the sacrifices of parenthood. 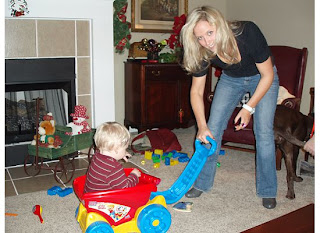 One Eli's favorites was the wagon filled with blocks from his cousin Wyatt. Now, he did love building towers, but found riding in it a bit more fun. Ha! I keep going in his playroom to find him loaded up in that little wagon. He looks plum ridiculous, but I love it! 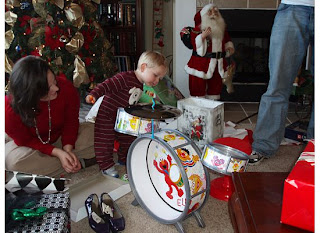 My sister Amy got Eli a really cool (and I use that term lightly) drum set with Elmo on it. Not only does he love that it has his favorite character, it makes lots of noise causing endless hours of headache for mom. Ha! Did I mention something about sacrifice in parenthood? 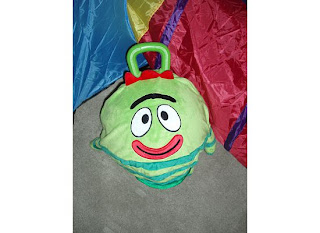 Another major success was the Brobee bouncy ball from my aunt Susanne. Oh my goodness how he loves Yo Gabba Gabba. Brobee is his favorite. So he walks around the house carrying a ball bigger than he is and saying, "Momma, Bo Bo. Bo Bo." LOVE IT!! 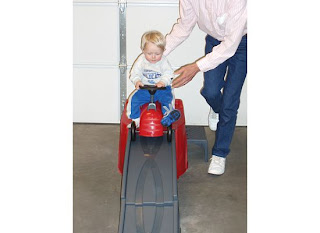 Another Christmas favorite was the Roller Coaster my mom and dad bought Eli. The first trip down was a little scary, but he has come to love it. Plus, when he isn't using it as a coaster, he slides down...head first! Thanks Clay!

Not pictured here, but equally as delightful to a 17 month old are the T-ball set from my brother, several books, a puzzle and a full set of Yo Gabba Gabba toys. Goodness this boy is blessed.
at 9:15 AM