We live in a culture obsessed with "signs." It's in our literature, our music our entertainment. I mean think about it. We have blockbuster hits like this: 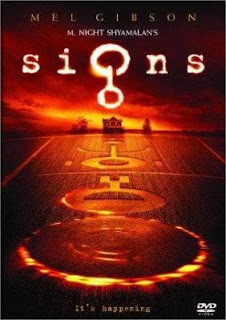 We have comedians who base their entire setup around the concept: 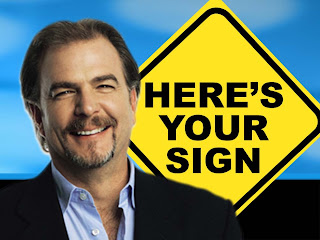 Then, we have this: 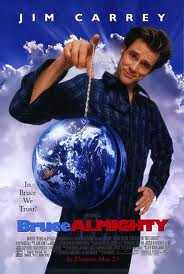 Bruce Almighty....and this is where it all begins!

Yesterday we were watching Bruce Almighty while getting Eli ready for bed. Now, I'm not a particular fan of the movie because I think it is slightly irreverent, but that's not the point! I was watching the scene where Bruce is driving down the road and praying for a sign from God, meanwhile they were all around him. He, of course, is blinded by his rage and doesn't pay attention, resulting in a car accident. At this point he jumps out of the car angry at God for not intervening, for not helping him and for not directing him. Bruce's accusations were absurd because anyone could see God's direction for him.

Right there the Holy Spirit revealed to me a prfound truth. We may not go as far as mocking God in our distress as Bruce did but on some level their is ignorance in our own blindness. We not see litteral street signs pointing us on the right path, but we do have God's word to map our course. You see we all live a version of this scene at some point in our lives, and the audacity of Bruce mocking God is just as absurd as our lack of faith or our anger at God when it was us that did in fact disobey.

His word it our street sign and clearly lays out a path for us. Like Bruce the choice is ours. We can either follow it or we can be blinded by our self pity, either way the directions are before us.

Being the ever philosophical person I am..ha..I thought nothing more about this and went to bed.


Here's the crazy part: I have come across the following verse on three seperate ocassions this week:

"The weapons we fight with are not the weapons of the world. On the contrary, they have divine power to demolish strongholds. 5 We demolish arguments and every pretension that sets itself up."

The truth is I've been covering one particular area of my life in prayer this past week, wondering what direction God would have me take. We'll there is my answer...plain as day!