It's A Small World After All

Ya'll are not going to believe what happened to me in the locker room at the gym today! I was minding my own business changing into my workout clothes when a woman tells me that I look familiar. I don't like to see snoody so I said, "I guess I've seen you in here before." She proceeded to tell me that could not possibly be it, so I admitted to being on television thinking that would be the end of the suspense as it typically is.

To my surprise she said, " I know this is a crazy question, but do you have family in Eastern Kentucky?" Flabbergasted I told her I indeed had family in that area. She went on to explain that her grandmother knew a lady who's niece was a news anchor in Bowling. THAT WOULD ME! Small World, right? Well it gets even smaller.

She asked if I knew so and so (that's what we say in the south to avoid naming someone) and I of course did. I told her that that person was in fact my cousin...it was hers too!! Can you believe it? I met my long, lost cousin right there in the locker not in Eastern Ky, but three hours away in the South Central part of the state...INSANE!!

Well, the would was about to get even small because it turned out she knew my grandfather who had left the mountains during his college years to settle in Nicholasville which was 150 miles from the Easterm KY moutnains...so had her grandmother. Not only that, but get this...we graduated from the same high school...BIZARRE!! 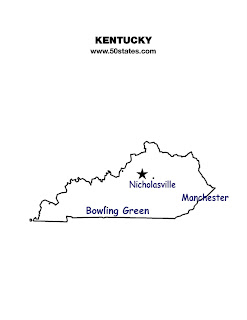 So to give you a visual. Out roots were both in Manchester, Ky but we were raised some 150 miles away in Nicholasville and it wasn't until we were both in the same locker room in Bowling Green Ky that we finally met...ha!

So, the world gets even smaller because I ran into her again tonight at Chick-fil-A...must be a family trait!

Only in Kentucky would you meet a long lost relative the locker room! It's small world after all!
at 8:19 PM