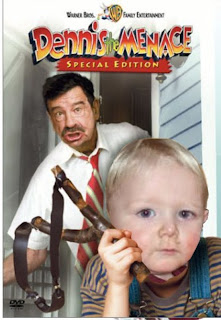 I don't know if ya'll know this, but having a toddler is awesome...really! I just sit and laugh at Eli sometimes. His brain is a sponge soaking up information and regurgitating it at inappropriate times. I'm not lying when I say I have literally laughed so hard that I can't catch my breath. Well, as you might have guessed, my little "Denise The Menace" (aka Eli) has been up to it again.

One night last week I was messing around on the computer while Eric and Eli played basketball. I wasn't paying much attention, but apparently Eli left the room for about thirty seconds. Of course we assumed it was to retrieve another ball from his collection of ten thousand...NOPE!!

All of a sudden we hear this loud crash followed by the wailing of an almost two-year-old. Our hearts were in our throats! Eric beat me to the back of the house to scope out the damage, and he emerged from our master bathroom with his arms straight out in front of him carrying a DRENCHED Eli.

The poor boy was covered from head to toe...in toilet water. That's right. Little "Denise The Menace" (aka Eli) had taken the mop to the bathroom where he proceeded to dunk it in the potty and run it across my newly cleaned bathroom floor. Of course (and thankfully) he did not wring it out, which meant a sopping wet floor perfect for making a barefoot 19 month-old fall.

Once we realized he had nothing but some broken pride, I lost it. I'm telling you, it was gut busting laughter. This kid is into everything....EVERYTHING!! The look of terror/horror on his drenched, little chubby face was priceless. I didn't even mind the emergency bath I had to give him, and I'm pretty sure Eric wasn't too upset about cleaning up the nasty bathroom...PS Kuddos for that one!!
at 8:00 AM