On Saturday, May 28th my dad had a serious accident. Most of you know this already, but I wanted to document it here for two reasons.

1. I want to remember the details for years to come.

Because the tree was full of water from recent storms, it acted as a conductor sending electricity to the branch my dad was sitting on, thus electrocuting him. He knew he would have to jump or die. He jumped. The 25 foot fall broke both of his wrists, an arm, his pelvis, several fingers and possibly his shoulder blades.

My grandmother saw him flailing on the ground and told my mom to help him. When mom reached him he was coherent but seriously injured and sweating profusely from the 1000 volt shock. My grandmother called 911 and he was transported to UK Trama Hospital.

The hours and days following were full of CAT Scans, EKGs, X-Rays and countless other procedures. He was released Monday afternoon and is recovering at home. He will likely have several surgeries and an expected 8 month recovery.

It's still an unpleasant situation, but we are praising God for protecting my dad from a more severe outcome. Please continue to hold my family in your prayers. Thank you in advance!! 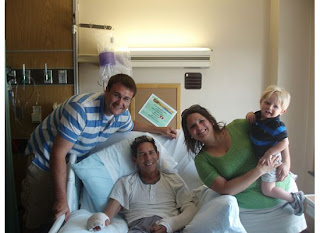 Without further delay, here is the patient 3 days after the incident. This is a TERRIBLE picture of me, but since Dad looks worse I posted it...ha!
at 10:01 AM