I've already mentioned this, and I'm sure you'll read it a thousand more times before Thanksgiving...I LOVE FALL!! I also love the south neither would be complete without football!

The Difference Between Football in the North and South

WOMEN'S ACCESSORIES
Up North: Chapstick in their back pocket and a $20 bill in their front pocket.
Down South: Louis Vuitton duffel with two lipsticks, powder,mascara (waterproof), and concealer. Wallet not necessary, that's what dates are for.
STADIUM SIZE
Up North: College football stadiums hold 20,000.
Down South: High School football stadiums hold 20,000.

PARKING
Up North: An hour before game time the University opens the campus for game parking.
Down South: RV's sporting their school flags begin arriving on Wednesday for the weekend festivities. The real faithful begin arriving on Tuesday.

GETTING TO THE STADIUM
Up North: You ask "Where's the stadium?" When you find it, you walk right in with no line.
Down South: When your near it, you'll hear it. On game day, it becomes the state's third largest city.

ANNOUNCERS
Up North: Paid.
Down South: Announcer harmonizes with the crowd in the fight song, with a tear in his eye because he is so proud of his team.

AFTER THE GAME
Up North: The stadium is empty way before the game ends.
Down South: Another rack of ribs on the smoker. Planning begins for next week's game. 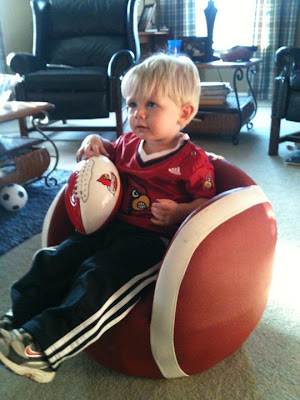 I think we're raising him up right! Perhaps another team? But that's another story for another day...
at 8:12 AM