Do ya'll ever have those days you feel like are epic fails? No way...me too! Try as I may to be organized, it's just not my strong suit. Perfect example: I hadn't heard anything all week about Eli's Halloween Party at daycare, so yesterday I decided to ask for details so that I could be the super- awesome, cool mom who brings the best treats! And of course being "the best" takes lots of organization and planning so I needed to be prepared.

Well as fate would have it, when I walked into the building there was a big, orange sign on the entrance table with all the details! I thought it was ingenious positioning for all the "other" parents who were less attentive to their child's academic dealings. The sign asked parents to bring in a bag of individually wrapped candy and to send their children's Halloween costume for the party that would take place at 10:30 am.

I won't lie, I may or may not have been slightly crushed when I realized that I wouldn't get to make my super-awesome treats thanks to stupid Health Department laws allowing ONLY individually wrapped candy...boo! (Not the Halloween kind boo, but the sports arena, "we don't like you BOO!!") Moving on. . .

Despite these crazy rules, I vowed to be the overachiever and get the biggest bag of candy I could find since I was certain most parents would send the bare minimum and go the cheap route. So, off to the Dollar General Store I went with Eli in tow. Poor guy had his heart set on some creepy looking, off brand, eyeballs, but I couldn't have that. What would people think? After mulling over the candy selection for a small eternity, I finally decided on the economy size Tootsie Rolls...go me!

Proud of my purchase and new role as Super-Cool Mom, I was inspired to continue my superb parenting skills by getting everything ready for the morning. With great care, I chose a lightweight outfit that wouldn't be too hot under Eli's costume, something I was sure "other" parents hadn't considered. Then, I packed Eli's backpack pull of candy, laid out his costume, and trotted off to bed.

Fast forward to 7:15 this morning when Eric calls to tell me that it had been a rough morning for Eli. Since the poor guy doesn't wake up so easily, I assumed we were talking about a mild temper tantrum or two. NOT THE CASE.

Eric went on to explain that Eli quite happily and proudly bounced into daycare wearing his new Batman costume. Only to his surprise, he was the only one dressed up! That's right, Momma messed up!! Turns out the Halloween Party is on Monday. Imagine that...a party on Halloween. Who would have thought?

The sad part is, I wore orange to work this morning thinking it was Halloween...oops! I'm so glad I didn't dress up, can you imagine what viewers would have thought? "Crazy TV lady doesn't even know what day it is!" Haha!

I can't believe I am that mom. You know who I'm talking about...that mom who is always late never prepared, and forgets major school events. Yeah, that's me! Hi, my name is Morgan and I'm that mom.

Still, I don't feel too bad about the whole situation because every time I picture Eli's little blonde head bopping into daycare proudly displaying his Batman Costume, I lose it. It's like a toddler, male version of Elle Woods in Legally Blonde! (Remember the seen where she goes to the Harvard school party dressed like a Playboy Bunny...CLASSIC!)

So no matter what parenting blooper you may have today, take comfort, because you are NOT that mom...the one who sends her son to school in a costume on what should have been a normal Friday.

The silver lining: he's only two and has NO IDEA. Oh, and at least I'm not this Mom!! 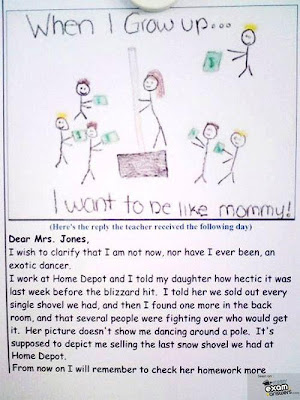