Last week while Eric was out of town I decorated the house for Christmas, but left the tree for us to do as a family. So this past Monday I made a pot of vegetable soup, cranked up the Christmas music, and turned on ABC Family. It was picture perfect...almost!!

Eli was so excited...too excited. Almost immediately he grabbed a glass ball, put it on his "t" and attempted to crank it across the room. As you can imagine, it broke into about a million pieces. Haha! We decided to give him a t-ball to play with. 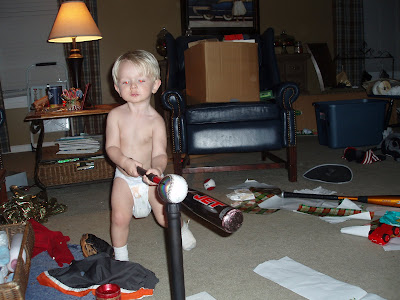 This lasted for all of five minutes until he decided he needed to help. He would basically take the ornaments off the tree, and move them to a better location somewhere near eye level to a toddler.

Finally, we wised up and gave him one ornament at a time to put on his tree. By the time he got the ornament, ran back to his room, found the perfect place on his tree, yelled for us to come look, and them made it back into the family room for the next ornament, we had made great headway. 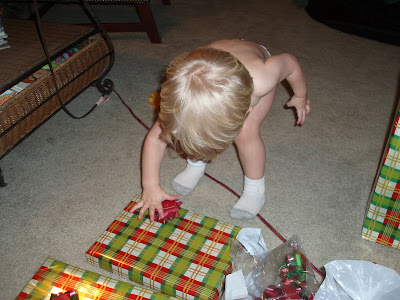 After the tree was done, Eli decided to help me wrap the gifts by placing a bow on top of each package. I had a hunch he might destroy a few gifts this season, so I opted out of fancy bows and replaced them with Wal-Mart cheapos. Good thing!! 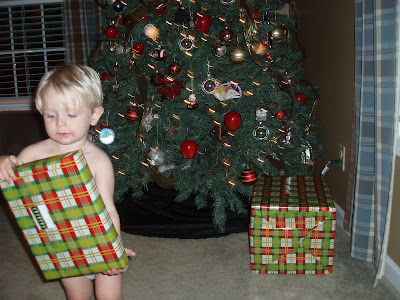 After the packages had been wrapped, we placed them under the three, and thus we decked the halls at the Watson home. 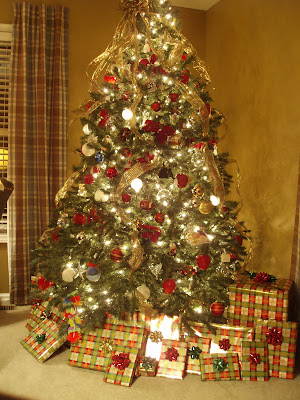