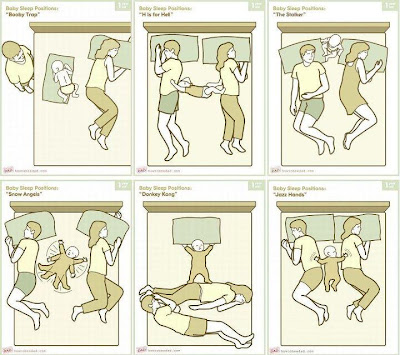 Ya'll this picture is my life! Actually, almost my life. Take the marriage bed and husband out of the equation, add a "big boy" bed in its place and...ta da...a night in the life of Morgan Watson.
If you have been following my blog for more than day you already know that Eli is the worst sleeper ever. PERIOD. Just last night I fought from 8:30 - 11:00 to get him to bed. He was up again at 1:00, 2:00 and 3:00. By the time I got him back down the last time, I just went ahead and came into work. Let me tell you, it's no fun getting 4 hours of sleep...at best!!

Throughout the past two years, six months and seventeen days (buts who's counting) my sleep deprivation has resulted in varying degrees of emotions and behaviors.

Normally an easy going and steady lady, I have turned from a southern belle into the big bad wolf in the middle of the night, or just at bedtime for that manner.

Normally a logical, sensible women, I have on occasion lost all practicalilty and become irrational to the point I make Cybil look normal.

Normally and mild and loving momma, I have become worse than Disney's faulest stepmother. I'm not lying. I make the witch in Sleeping Beauty look like Mother Theresa.

Normally "sunshine and roses," I have walked through the pits of severe depression. That's all I need to say about that.

I am here to tell you that sleep (or the lack thereof) effects virtually every area of your life. Let's explore...shall we?

**Disclaimer: these are in order of my schedule, not importance**
1. Career - simply put, I LOVE my job. It's a dream come true for me and some days it's my only source of normalcy. Even with the insane hours and stressful workload, it is an outlet for my creativity and the only place where I maintain any part of my former identity. However, a lack a sleep can lead to reduced concentration which is detrimental in broadcast journalism and LIVE television.

2. Health - I don't have to tell you this, but sleep is essential to our overall health. I have found that I tend to get more colds and sinus infections during times of reduced sleep. Plus my endometriosis becomes almost unbearable. My biggest problem in this area is my lack of exercise. Simply put, when it comes to hitting the gym or hitting the hay...I'm choosing the latter.

3. My Marriage - I'll be the first to admit that during the early days of motherhood, I resented that Eric could sleep through endless wailing. I still hate that he is patient and unaffected by lack of sleep while I'm a mad woman. Nonetheless, we have developed a system that works for us and I no longer resent his God-given ability to let things go. The big issue in marriage is the lack of time we actually have together. We're not headed for divorce or even the rocks. In fact, we are crazy, head-over heels in love... which is why I want to spend time alone with my man. You know, watching a movie, playing cards, talking. Long gone are those days. By the time I fight Eli to sleep (fight being the operative word) I pass out in his bed and only move into ours when Eric wakes me. By that point I'm in a comatose state all wrong for quality time. You get the picture!

4. My Home - I think it's safe to say that women set the tone for the home. Well let me tell you, by the time I sneak in a nap, attempt a workout and pick up Eli, it's time to throw dinner together with what is left in the cabinet since I never made it the grocery. Of course after the hour it takes me to putt through cleaning up, I have to get ready for the next day. This ends in me sniffing dirty clothes to see which are suitable for the next day since I was too tired do actually do laundry. Then comes bathtime which is slightly more relxing since I get to soak my feet in warm water while Eli plays. Of course any form of relaxation is temporary because following bathtime comes the dreaded bedtime ritual.

99% of the time, I can accept that this is my life, but it's that one percent that drives me almost crazy. The perfectionist, "fix-it" mentality rears its ungly head, and I become the monster described above.

Really, I live my life in extremes. 99% of the time, I just roll with it...the lack of sleep that is. While one percent of the time I make myself crazy trying to find a solution. So, I'm going for a balance. I'm looking for a way to be more consistent in dealing with our little situation. I want to be proactive and realistic at the same time. Letting it go works for my sanity, but isn't the best option for our well-being. Meanwhile trying to "fix it" is unrealistic and leads to frustration.

So, I am looking for solutions for a more positive bedtime routine that promotes obedience, serenity, and some much needed rest in the Watson home.

In the next post, I'll tell you more about what I have in mind.