I'm sure you've heard, but tomorrow is a VERY big deal in these parts. That's because for the FIRST TIME EVER the University of Louisville Cardinals will take on the University of Kentucky Wildcats in the Final Four. This truly is epic. I mean, "Kentucky is to basketball what Texas is to football." AMEN!

The rivalry is getting heated around here which means lots of fun pictures are circling the internet. So, which way do I cheer? I'm glad you asked!

I am first and foremost, a Western Kentucky Hilltoppers Fan. I mean it is my Alma Meter. However, I am also a UK fan. I grew up in Lexington and my momma would disown me if I was anything but. So, as long as WKU isn't in the mix... I BLEED BLUE!! 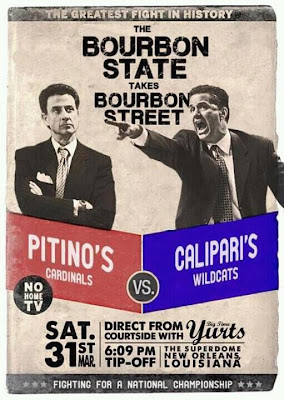 Well, I happened to marry a Louisville fan which to my parents was right up there with marrying a non-Baptist. Luckily, we are of the same religious background so my family overlooked this one flaw. In fact, we have a lot of fun with the rivalry.
Eric's groom's cake was a House Divided. Really. It was in the shape of a house with the UK logo on top and the Cardinals logo on bottom. Can you tell which way our Baker cheered? 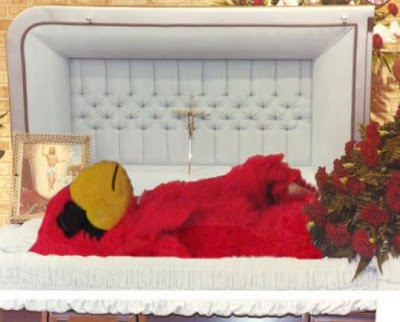 The above picture is my prediction for the outcome of tomorrow's game. Sadly, I will be the solo UK fan. Eric and his family will be watching it with us, and they have managed to brainwash my innocent child into cheering for the Cardinals. Oh, the agony!
As with all UK v. Louisville games, we have a wager. The winning team will influence what Eli wears on Sunday. He has jerseys for each team...so the winner will be sported on his shirt the following day.
As a side bar I would like to confess one small thing. Although I will be cheering for my hometown team, I won't be too upset of Louisville wins. That's because Eric would win the bracket bet at work and bring home a nice chunk of change that would sooth all my woes away.
Nonetheless...
ooooooh...C-A-T-S Cats, CATS, CATS!!
GO BIG BLUE!!!!!!!!!!!
at 9:41 AM