I know most people don't consider traveling days part of their vacation, but I do...for two reasons.  First, any day that is out of the norm is like a vacation when you have a toddler.  Two, I love to drive.  It is relaxing, and I get to see things that aren't part of my every day life. 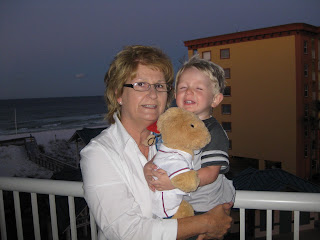 Saturday morning came too early.  The pizza from the night before had given me some severe heartburn which lead being awake half the night. Nonetheless, I woke up and help load the van while Emily and Dixie took a few last minute pictures on the balcony. 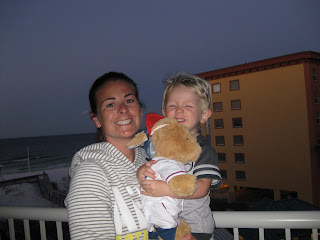 We ended up leaving an hour later than planned which meant we hit traffic...and lots of it.  We never went more than 30 miles without getting stopped by some sort of jam.  Luckily, we found a Chick-fil-A in Alabama where Eli was able to get out and play.  We made it back to Marion in time for a late dinner and and early bedtime...you know for the Easter Bunny!
at 10:17 AM