A Camping We Will Go

Eric and I love to go camping, and often get to take extra trips thanks to living so close to a national park.  We've tried camping in the backyard and a cabin with Eli, and both were a disaster.  Nonetheless, we braved yet another attempt last night.  Scary...I know! 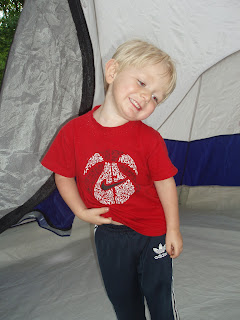 Eric worked through lunch and then we loaded up the van.  I should have known when Eli asked if we were going to Disney World that camping might me a stretch.  Aside from dropping the eggs, things started out great.  In fact, Eli was pretty agreeable while we put up the tent. 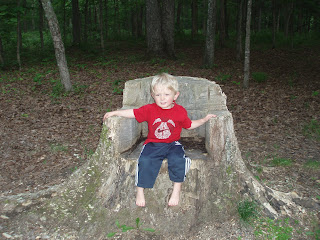 It was while Eric was cooking dinner that things took a downward spiral.  My sweet boy tripped into this toddler tizzy and refused to obey.  He threw about a zillion fits, and whined constantly.  Poor guy spent more time in trouble than out of it. 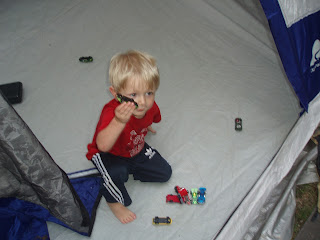 After dinner I got him ready for bed.  Wouldn't you know that as soon as I brought him back to the tent, he had a major blowout...rrh!  Back to the bathrooms we went.  Only his bottom was sore from the unpleasant timing of the tummy problems, so he cried the whole time we ate s'mores.  Finally, I'd had enough and made him go to bed.  By the grace of God he slept all night! We got  up this morning and took a walk while Eric made a big breakfast for us.  Eli continued to be his UN-charming self, so we opted to forgo the planned hiking and head home.  It was a wise decision on so many levels because Eli went down for a LONG, LONG nap, and it started raining.  I'll update you on the rest of the weekend later, but just know it was more pleasant.
at 10:01 AM