Why My Vote Didn't Count

Well ya'll, I performed my civic duty today by voting in Kentucky's Primary election, although I probably should have saved the trip.  This may shock a lot of you not from here, but even though this is a VERY conservative state, most people are registered Democrat...which means I rarely get to vote.

Now before we get into a political debate, let me explain something.  I have NEVER voted a straight ticket...until today...which is the point of this post. Anyway,  I just don't think it's right. Instead, I believe it is important to vote for each office based on the candidate who would best serve the public.  Thus, I have voted for democrats, republicans, and independents. 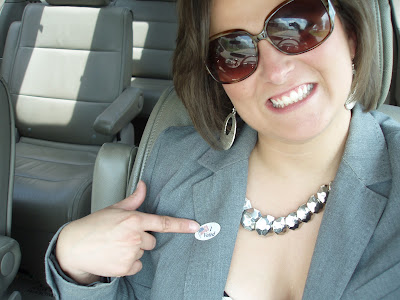 Moving on.  This afternoon I swung by the precinct to vote.  Sadly, the only say I had was in was the republican candidate to run in the presidential race.  Of course Romney, Santorum, Gingrich and Paul were on the ballad.  Thus, I voted my first  straight ticket.

Of course the  republican party has already endorsed Romney, so regardless of who I voted for, he was the win.  Haha.  In a nut shell, I could have written my name on the balled because at the end of the day...my vote didn't count.

While this is yet another reason someone could complain about not voting,  I will not.   My vote didn't count in the grand scheme of American politics, but it did count in the hearts of  thousand of men and women who have so bravely defended such freedoms.  I am truly grateful for their sacrifice!!
at 10:42 AM