Eric Got A Nose Job...Sorta

It has been an interesting 24 hours.  It started yesterday morning when I met Eric at the ENT to examine the softball's handiwork.  As luck would have it, an interview ran long which left me racing around town to get to the appointment.

Upon arriving we discovered that Eric's nose had not one, but three...THREE...breaks in it!  Well, you can imagine my surprise when the doctor adjusted two of the spots right there in his office...sans medicine!  Ya'll I have a strong stomach, but let me tell you that blood, poop and puke have nothing on the sound of bone cracking.  Had I eaten that morning I would have lost my breakfast...Insert gagging sound!!

The third break required "surgery."  This meant a quick race home to drop off one of the cars and a super-fast breakfast.  Oh yeah, and a billion calls back and forth with work to arrange for our unexpected afternoon.

We made it the hospital only to discover that we were in the wrong spot, so we hiked to the opposite end of the building only to get sent back to where we had originally started.  Let me tell you what, after getting less than four hours of sleep, jogging across the hospital campus while wearing stiletto heels was not amusing. especially when we ended up having to wait anyway. In addition to this confusion, hospitals don't use names anymore, instead they assign patients numbers...who knew?  That's all fine and dandy, but Eric's number didn't jive with what the doctors were given...rhh!

I'll spare you the frustrating details that may or may not result in a call to the hospital administrator, but let me say that six LONG and did I mention FRUSTRATING hours later, we were headed home. 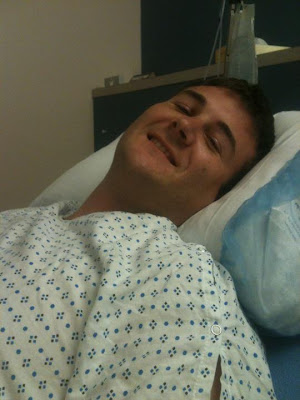 Here is one last "before" shot.  I took this while watching my third episode of "Dallas Cowboy Cheerleader."  I think I could get hooked on that show, which really says a lot about my state of boredom during those six FRUSTRATING hours. 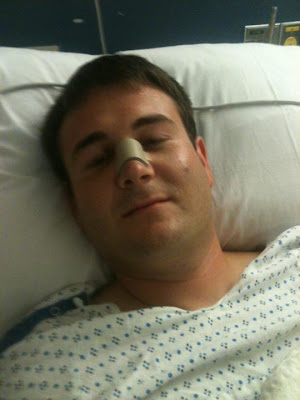 This is coming out of surgery, sporting his new nose.  I know this is mean, but I had to include one final picture below.  Eric was feeling pretty good thanks to all the meds.  I'm sure the glassy eyes give him away, but ya'll, he sure was proud of that Sprite.  I was cracking up! 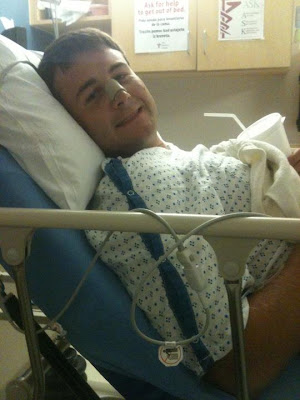 We left the hospital and went straight to get Eli from daycare.  We made it home in enough time to pack before Tina and Owen came to pick up Little Man.  I hated to leave him, but we needed the rest.  Plus, we had no way to get him daycare again the next morning.  What did we do with our free time you ask?  Well, we watched a movie and went to bed!  It was nice to have a full night sleep even if Eric's nose had to take one for the team...ha!