I don't even know where to start this because I feel like I've been keeping the secret for about a billion years.  I had so many posts to write, but since we are just now spilling the beans, I'm going to attempt to put all this information into one VERY long entry.

Getting Preggo:  Well, we had decided to wait until the end of this year to try for baby #2.  I had been going back and forth on when to try, but my wise husband wanted to wait. Since I wasn't 100% decided, I didn't really push the subject. You can imagine my surprise in June when Eric announced that we should try.

I was instantly ready, and that's how I knew the Lord was leading us into this.  My prayer had been that we would be in agreement when the time was right.  Of course we serve a faithful and mighty God, and three short weeks later we got two pink lines. I say "three short weeks," but the truth is they were long.  I was analyzing every detail and symptom and went through a few (ok, a lot) of early detection pregnancy test...ha! 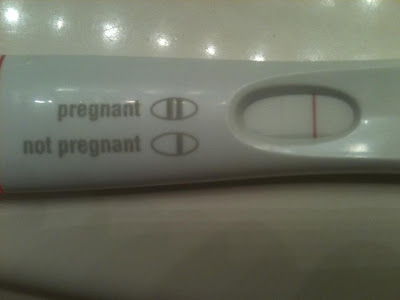 Finding Out: Finally, on July 4th 2012 I got a big fat positive.  I woke up at 4:30 that morning to get ready for work, and took the test then.  As you can tell from the picture, it was a very faint line.  So, I decided to swing by Wal-Mart on the way to the station to pick up another test.

Ya'll, I prissed through Wal Mart sans make up with wet hair and high heels on.  I'm sure I was a sight buying that pregnancy test. Ha!  I took it as soon as I got to work and got an error reading.  RRH!  It actually ended up happening three more times!  So, what did I do?

I went back to Wal-Mart as soon as the show was over and bought more tests!  I also picked up a July 4th onsie to commemorate the day! 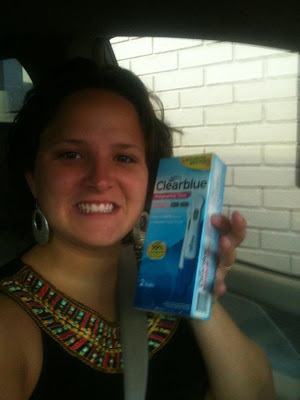 Spilling The Beans: By the time I made it home, Eli was waking up for the day.  I had him carry the onsie to Eric and tell him.  Eli was so excited, and of course, so was Eric!  I showed him the test and we agreed that the line was extremely faint.  I ended up taking the Wal-Mart test again, and I got another error along with a negative.

Still, I was convinced.  That meant a third trip to Wal-Mart for more tests.  I took one that night and another the next morning.  The lines kept getting darker and darker, so I knew this was it!  I went to the doctor the following day to get a blood test confirmation.

That weekend we went to Eric's parent's house to visit, but decided to keep the baby a secret a little longer. Of course I couldn't and we told!!  We called my parents shorty after but swore everyone to secrecy until the first ultrasound!

Early Pregnancy: Well, from the start I "KNEW" I was having a girl.  I'm not so confident now, but we'll see.  Other than that, I started showing extremely early and was freaked out that it might be twins.  Don't worry...it's not!

I have had severe food aversions to the point I can't eat.  In fact, I have lost 15 pounds since getting pregnant.  I also got extremely sick when I got hot. I have now been one month pregnant in August and nine months pregnant in August, and the heat is much worse early on that it was when I had Eli.

Other than that, I was extremely fatigued early on and slept around the clock.  Oh yeah, I wouldn't be honest if I left out the mood swings.  They've been pretty intense..ha! 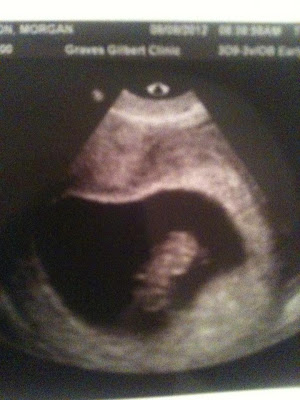 What We're Being Asked:  Everyone wants to know if we are finding out the gender.  The answer is YES.  We will know who is joining our family on September 19th.

We also get asked about delivery.  I plan on having a repeat C-section for several medical reasons.  As of now, we are scheduled for a tentative date of March 3rd but could have it anytime between then and the 10th depending on the baby's development.

Eli's Take On Baby Two:  Eli is so excited to be a big brother.  He talks about it often and wants to kiss the baby in my tummy.  In fact, Eli was the first to tell our secret.  Everyone thought he was lying, but no, he was just excited.

He also really wants a baby brother.  A few days after finding out he said, "Mom, don't have a girl." Haha! He reminds me often that he'll be mad if he doesn't have a brother. Although, when you ask him who's in Mommy's tummy, he always says, "baby sister, Ellie."

Eli also understands that his playroom will be the baby's room, and that we'll have to share toys.  One night I was lying with him while he fell asleep.  All of a sudden, he says "Mom, Eli not play with hard balls anymore."  I knew he was talking about baseballs, so I asked him why.  His response, " Eli might hurt the baby.  Eli need softballs now."  Bless his heart!!


We are so eager to share our journey through pregnancy with you.  Please be in prayer for a healthy baby and delivery.  Oh yeah....and a good sleeper...we're due one of those!!