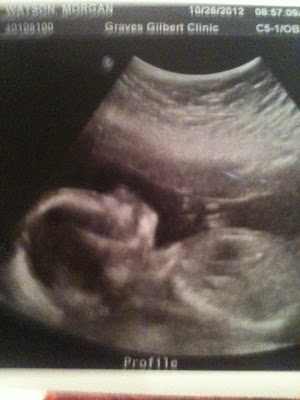 Today was my 20 week ultrasound, and for some reason I have been a nervous wreck about it.  With Eli, I was so young and stupid it never occurred to me that anything could be wrong.  Plus, we didn't know the gender at that point.  Honestly, I was so eager to find out the gender that I didn't even think about the rest of it.

This time I was well aware of the risks that come with any pregnancy. Plus, I have had a really hard time gaining weight and have felt little fetal movement; not to mention that I already knew the gender...this time it was strictly business.  That being said, we had also switched doctors and had been told that this particular scan could take up to 45 minutes.  That was not the case with Eli.  In fact, the only time we had a scan lasting more than 15 minutes was the day I was induced for complications.

You can imagine that I was a little on edge this morning.  Praise the Lord, Ellie looks wonderful.  We were told that she is a little small, but the doctor isn't concerned.  In fact he said, "You just don't grow 'em big, and there's nothing wrong with that."  AMEN!!  I have no problem with carrying around a small baby!

There was one other SMALL abnormality, please recognize the emphasis on SMALL!  Ellie's kidneys are dilated and not completely emptying.  This is called Renal Pelvic Dilation and is the number one abnormality found on a 20 week scan.  It is actually more common in boys than girls, and it almost always corrects itself before birth.

In the event that it does not, an ultrasound is performed at delivery and again in two weeks.  From there it is generally treated with six months of low antibiotics, however in rare cases minor surgery is required.

As you can imagine, I was scared at first.  However, the Lord as placed many people in my life with general health knowledge, and they have been so encouraging and helpful.  That being said, we are confident that the Lord has knitted Ellie together perfectly in my womb according to his will, and we are so grateful that this is nothing more than a minor abnormality that will more than likely be healed before birth!!

We thank you in advance for joining us in praying for that healing!
at 7:43 PM