Today we will say goodbye to our family member and beloved Louie.  He joined the Watson clan Easter of 2011 and has had an interesting place in our hearts.  I say interesting because our time together has been just that...full of ups, downs, frustration, and a lot of laughter. 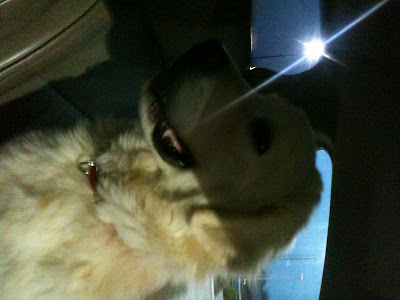 Louie was and is the most precious and lovable dog you could ever hope for.  He loves riding in the car just like he's a passenger, and we love all the strange looks from other drivers on the road. 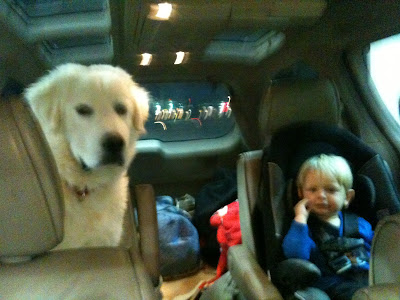 Louie is a gentle giant and always eager to let Eli be a rough little boy.  I never have to worry about Louie getting mad or snapping.  Louie can bulldoze a grown man down, but is never anything but gentle with children. 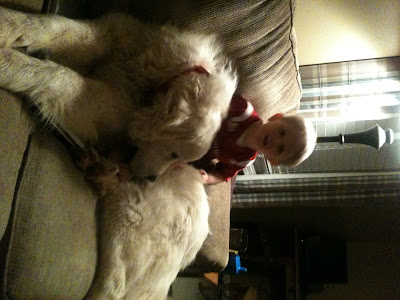 He's also a big baby.  He loves to sleep and cuddle, and he thinks he's a lap dog....just ask Eric. 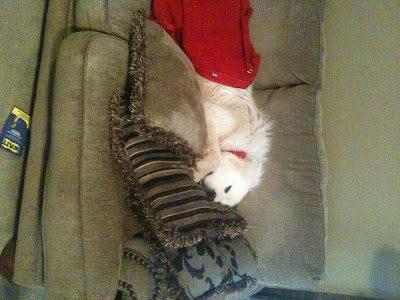 You're probably wondering, "So, what's the problem?"  Well, the problem is... Louie's adventurous spirit.  Like most Great White Pyrenees, he loves to roam.  Unfortunately, our neighbors do not appreciate it. 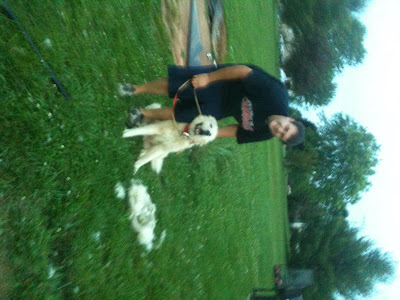 As much as we hated it, we kept him and tried to break him to the fence many times.  Luckily during much of the year, we play outside.  This means that we take him on walks, play fetch, and just offer him company. Sadly, that's not the case during the cooler months.  We invite him inside, but his heart is outdoors. 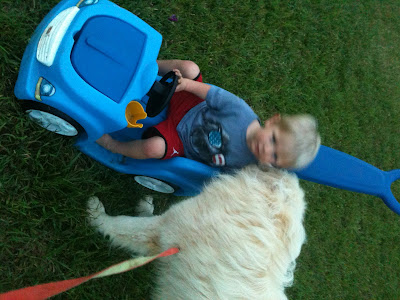 So, we talked with a trainer who says there is a chance we could train Louie.  However, with roaming being in his genetic makeup, it wasn't likely.  This forced us to make the difficult decision to find him a new home where he can run freely.  We began to pray, and Lord answered.  Louie will be joining his new family today. He'll have a doggy sister and lots of land to play on too! 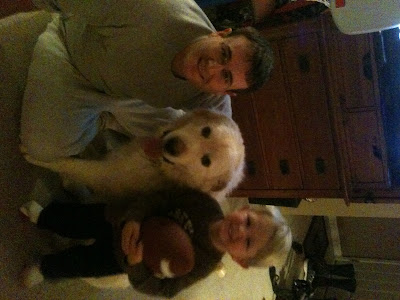 It's no secret that I'm not an animal person. I just don't get attached; maybe it was the whole growing up on a farm and eating your pet cow thing.  Ha!  Nonetheless, taking this farewell picture last night nearly broke my heat into.

Goodbye, Louie.  You have been a wonderful headache the past 18 months, and we will truly miss your adventurous spirit and adorable heart.  We hope you know that you'll always hold a special place in our hearts because you were Eli's first pet, and that's special.  Please also know that we are doing this because we love you and want you to have the life you deserve running FREELY on a farm with other dogs to play with and plenty of animals to herd.  Thank you for the memories.