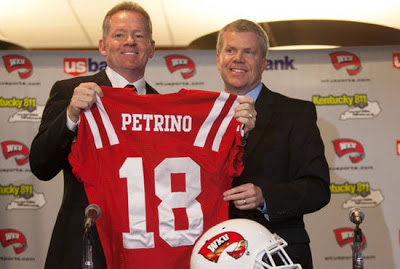 Even if you don't follow sports, you've probably heard that Bobby Petrino is new head coach of WKU...whoot!  Please don't say, "WKU who," or I might just cry!

Anyway, there has been a lot of negative press surrounding this hire, and I just want to share my thoughts on it.  First and foremost, I serve a God of second, third, tenth and really infinite chances.  I know it's easy to say well, "he had an affair."   Well, guess what?  I may or may not have said sh*t this morning when I had to slam on my breaks.  Ok, you caught me.  I said it.

So, where I am I going with this?  I think we need to be careful to stop seeing degrees of sin.  In God's eyes cussing is on the same level as cheating.  Get my drift?  We are all sinners!

I do think we need to hold our athletes and coaches to higher standards.  Let's face it, we don't have the best role models here in good ole Kentucky.

WKU's former basketball coach Ken McDonald had an affair with a student that lead to the end of his marriage.

UK's basketball coach John Calipari has had nearly every successful season revoked due to some sort of recruiting investigation or violation.

Louiville's Rick Pitino not only had an affair, but also paid for an abortion.

Ya'll the list is endless.  I hate it; I really do.  But here's the thing, WKU is not only showing this man mercy by giving him a second chance, they committed to holding him accountable for his actions and to a higher standard.  They are raising the bar for behavior and hopefully setting an example of how coaches should behave.

This is a small, conservative town and you better believe that word will get around if this man even looks in the direction of another woman.  And I would be disappointed if the university didn't evoke consequences at that point.

One final thought.  I keep hearing reporters ask the question about how parents will react to Petrino on a recruiting trip.  As a mother, I would have NO qualms about my son playing for this man.  I STRONGLY believe that it is not the responsibility of the teacher, the coach, the neighbor or anyone else to raise my son.  It falls on me as his parent.  Besides, if I wait until Eli is 18 to start worrying about morals, we may have bigger problems on our hands.

In short, I applaud my university for giving this man a second chance at coaching.  I pray they will hold him to a higher standard, and I welcome the chance for these boys to experience this incredible opportunity.  Not every kid is SEC material, but that doesn't mean we shouldn't give them the best experience possible.

Welcome to the Hill, Bobby...GO TOPS!!