Weekend With The Watsons

I can't remember whether or not I mentioned this in my Christmas post, but Eli went home with Eric's parents on Christmas Day.  It nearly killed me, but Western Kentucky was expected to get a foot of snow and since we had already arranged for "vacation" week at daycare, we had no choice but to go ahead and send him.

Of course he didn't mind a bit, and I knew he was in good hands.  After a few tears, I was over it and was able to spend my baby-free time resting, taking down Christmas decorations, and relaxing with my hubby!

Eric was able to take off work on Friday morning to finish taking down the Christmas lights, so after I got off work we were ready to go see our boy! 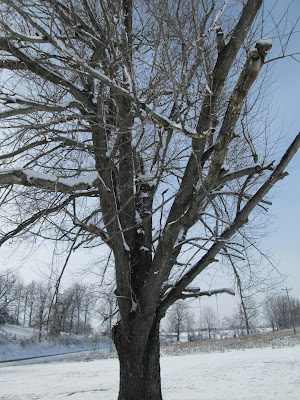 Of course Eli was asleep when we got there, but that didn't last too long.  We ate BBQ for dinner and relaxed a little before bedtime.  Then Saturday morning we got up, ate breakfast, and I made up for lost time playing with Eli while Eric and Colby played in the snow. 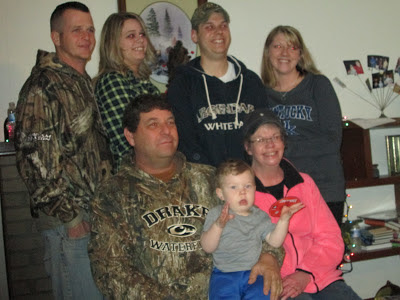 Once everyone was ready, we headed to do Christmas with the Belt family.  I cannot even begin to describe how wonderful the ladies of the family cook.  It is beyond amazing!  I feel sorry for Eric who went from eating meals like he grew up with to being married to a wife who's least favorite room is the kitchen. Ha! While we waited for dinner, we watched the UK v. UL basketball game...the Cards won which made Eric's holiday all the brighter! 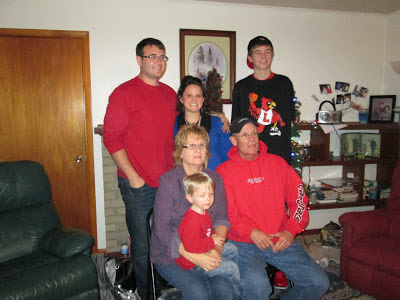 Then it was dinner, a game of Dirty Santa, some family pictures (which you're seeing now) and another game of Apples To Apples.  Of course the kids loved running around the house, playing video games, and being together. They were pretty bummed when we headed home for the night. 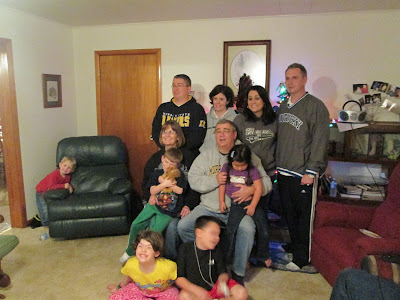 Don't worry.  They were reunited on Sunday morning and spent time playing in the snow, throwing ball, and watching movies.  Eric's cousins are all pretty much from out of town, so they had to hit the road fairly early. We headed back to eat dinner and rest.  Eli ended up falling asleep way too late in the afternoon and had a hard time going to bed that night. 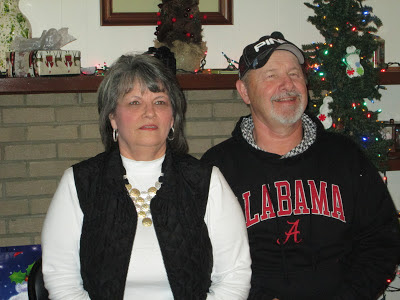 Monday was New Year's Eve and Eric's dad had to work, so we went to town for lunch.  We ended up eating at a local pizza place, which was amazing!  After a quick Wal-Mart run, it was time to head back home for dinner and more fun. 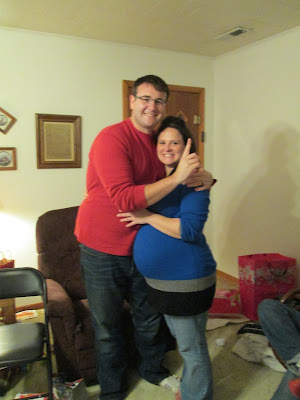 Eric's parents volunteered to watch Eli so that we could go out for New Year's Eve, but I think we both wanted sleep more than we did a date!  It's the little things, ya'll. We brought in 2013 by watching family videos and the east coast New Year's Eve party.  I know, we're party animals.  We didn't even make it to midnight on Central time.  Ha! 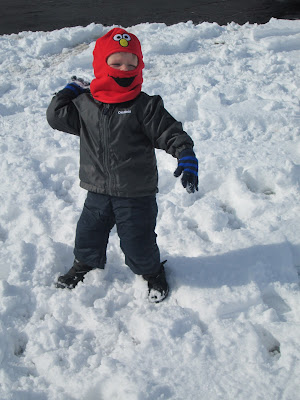 We ended up leaving earlier than planned on Tuesday because Eric was getting sick, and we knew that Eli would take a while to settle back down after being away for so long.  Plus, we wanted him to play with all of his Christmas toys before bed. 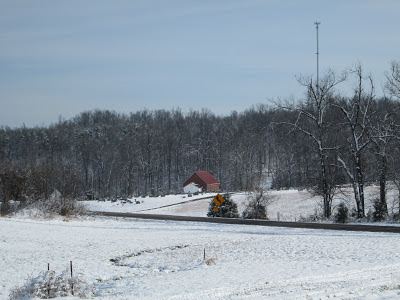 After a wonderful lunch, we hit road.  We ended up stopping for groceries on the way home and spent the evening unpacking, relaxing and playing with this sweet boy. 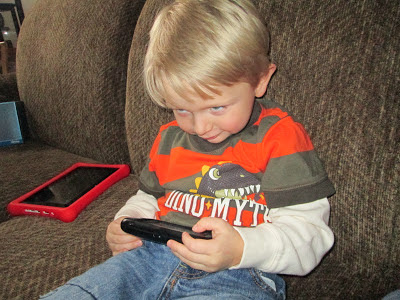 We sure hated to get back into the grind of things yesterday, but we feel quite rested now and blessed for having had such a wonderful holiday season.  Now we're slowly getting caught up on laundry, falling back into routine, and dusting off the ol' blog.

Hope your holiday was as wonderful as ours!