I had another wonderful night's rest, and ended up sleeping until my doctor came around for his rotations.  He gave me the all-clear to go home, and I was about to jump in the shower when our pediatrician came in to tell me that Ellie's ultrasound continued to show fluid on her kidneys.  He explained that everything was fine for the moment, but that we would be referred to Vanderbilt.

The hospital was short on rooms, so they were in a hurry to get us out of there.  I was still getting dressed when they discharged Ellie, so I didn't have time to shower.  It ended up working out well because Eric was back with Eli and ready to get home anyway.  After a few trips back and forth to the car, we were ready to make the voyage home. 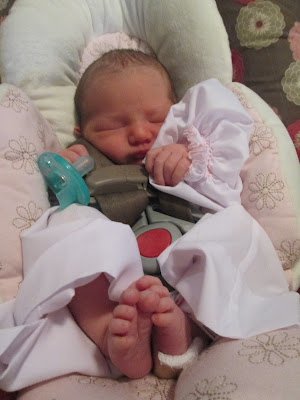 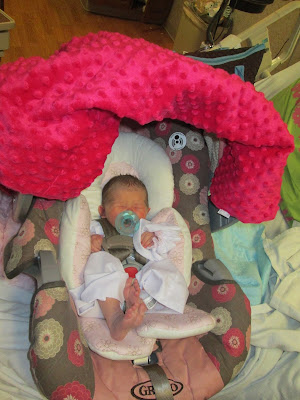 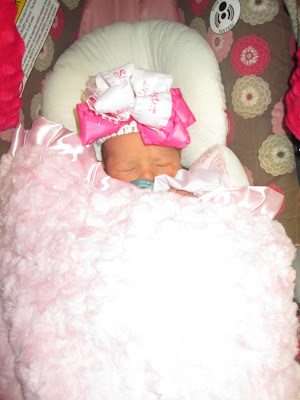 We got Ellie all dolled up in her sweet smocked dress and custom made bow!  She looked so sweet all bundled up.  It was almost 100 degrees the day we brought Eli home from the hospital, and it snowed the day Ellie came home. 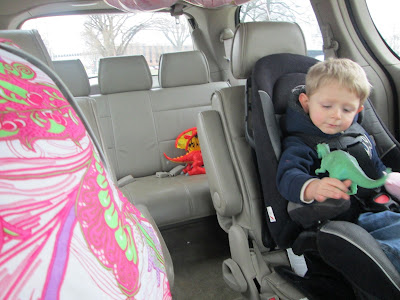 Another major difference between the two was the actual drive.  With Eli, we drove about 20 miles per hour the whole way home.  This time you wold have never known we had a newborn in the car.  In fact, we even stopped by the pharmacy to get my pain meds and Ellie's medicine for her kidneys. 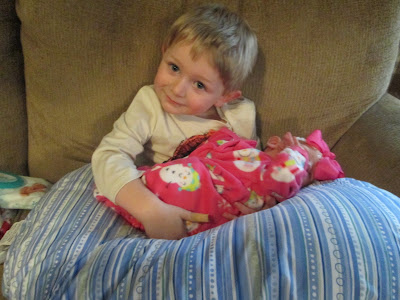 When we finally made it to the house Eli was eager to show Ellie around.  I changed her into a warm sleeper, and we spent some time together as a family.  Eric hadn't slept quite as well as I had in the hospital, so I sent him to bed to rest while I played with the kids and put a few things away.

He ran some errands when he got up, and I rocked keeping the two kids alone!  He fixed us dinner, and then let me try to rest before my first night up with a newborn.  I think I slept for about 2 hours before Eli woke me up crying (surprise, surprise.)  I ended up putting him to bed since he was so insistent on seeing me.  Then I slept another hour or so before Ellie was up for her first feeding. 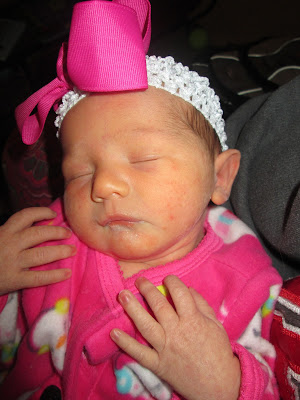 She seems to be a great sleeper, and I couldn't be more thankful to be home with my babies!