The Longest Weekend Ever

It felt like this weekend would never come; now it feels like it will never end.  For nine months I have imagined what this weekend would feel like.  Having a repeat c-section gives you a day. Unlike a natural delivery, you know EXACTLY when baby will be coming, and that changes things a little. 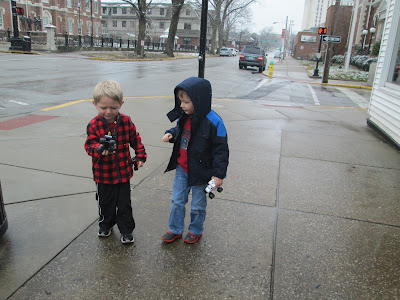 Originally we had planned on having a family weekend, doing the Brig Brother Bash and hanging out until our parents arrived on Sunday.  Ultimately, we decided to have our families come early so that they could help pass the time away and keep us occupied.  It was the right thing to do. 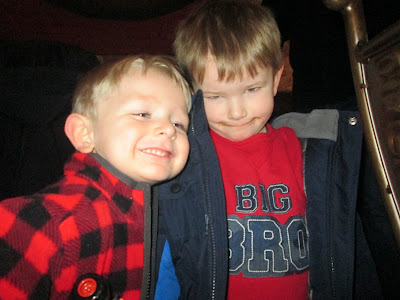 We started the weekend by having breakfast with the Adkins family at a local restaurant.  Eli and Owen hadn't seen each other in almost a month, so they were excited!!

Here's a funny side story:  We still hadn't given Gabe, Tina, Owen and Parker their Christmas presents, so we took them to town with us.  It happened to snow as well, so Eli kept asking if it was Christmas time.  Ha! After breakfast we came home to deep clean the house again..AKA...nest!  My parents ended up not making into town until late evening because of a bad accident on the interstate.  Once they got here we headed out to eat at Logan's Steak House. 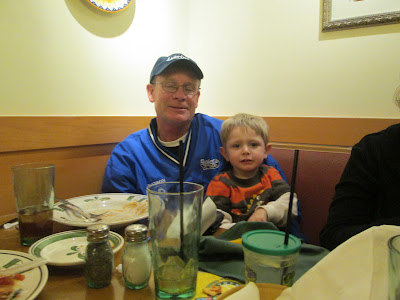 Eric's parents made it earlier today, and we all met at Steak & Shake.  They took Eric and Eli with them to check into the hotel and go shopping while my parents and I went on a wild goose chase to find a car seat thingy I needed.  Afterwards, we hit up the grocery for a few essentials.

Everyone met back up at our house to visit for a bit, then we went to Olive Garden with Eric's parents.  It was the last meal...and a good one!

Now we have finally made it home, finished packing, and are getting ready for the hospital.  We're letting Eli snuggles between us, but let's be honest, there won't be much sleeping tonight!