Eric worked this morning, so I was home alone with the kids.  We spent the morning relaxing which pretty much included playing baseball...it's how we roll!  Anyway, we had planned on going to WKU's spring football game with the Adkins, but I had the wrong time.  I thought the game started at 5:30, but it was 2:00. I had already promised Eli that we go, so that meant I had to venture out solo. 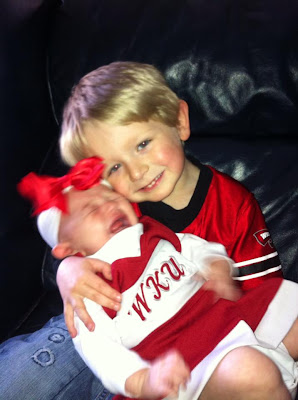 Really, the kids did quite well.  They fell asleep on the way, so I treated myself to a Sonic Sweet Tea. My moment of quiet was short lived because Ellie woke up ready to eat.  It struck me funny that I was sitting there feeding my baby in the same parking garage I had used every day as a college student.  It's weird because I still feel young enough to be in college, but the fact that I was sitting in a minivan with two kiddos is a pretty good indication that I'm not as young as I might think! 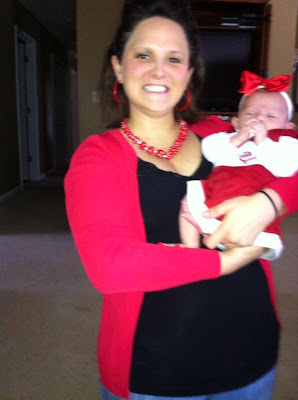 We were a little late getting to the game, but Eli did a great job being patient while we waited on Owen to get there. I am so excited about the new season.  The boys looked great!  I know Petrino will probably only stay a year-two max- but I couldn't be more excited about what this will do for our program!! 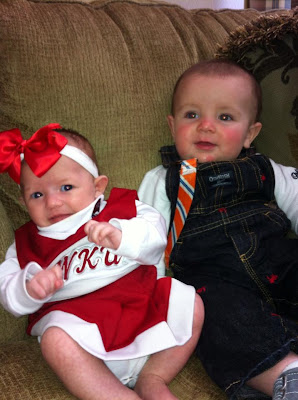 It was a little chilly, so we ended up leaving after the third quarter and heading home.  The Adkins came over for dinner and we went all out grilling hot dogs. Ha!  After they left, we gave the kids their baths and tried again to have movie night with Eli.  Of course that and the whole bedtime routine turned into World War Three.  Ya'll I'm at my whits end with the kid.  Here to hoping we figure out a solution and FAST!!