Today started out great!  Eli and Ellie slept late and were in much better spirits this morning when they woke up.  We were able to feed them, dress them, and get them to church on time!   The worst part of the morning was Eli refusing a picture, but at least I snapped one of this sweet girl! 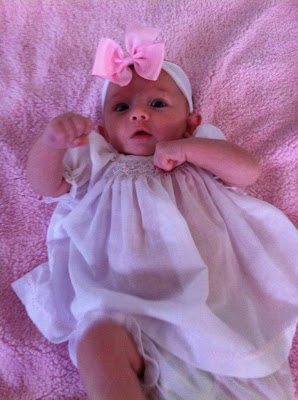 After playing around the house for much of the afternoon, I decided to hit up the grocery.  Since Ellie had been so bad yesterday while I tried to shop, I decided to leave her home with Eric while I took Eli.  He was predictably good in the store, and the trip was a success...until we made it to the parking lot. That would be about the time I locked him in the van...strapped in his car seat...eating Twizzlers.  Of course I had to call Eric to bring the spare key.  All the while Eli was singing, talking to me, enjoying the Twizzlers, and even getting a little creative with them. 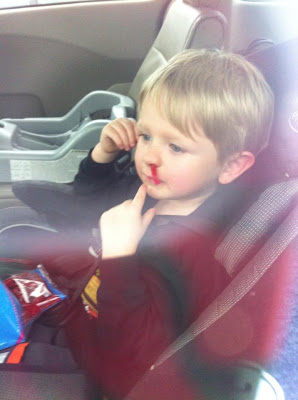 Yes, that is candy up his nose.  Yes, he did eat it.  There wasn't a thing in the world I could do to stop him. Ha!  I could not stop laughing the whole time he was in there.  I'm sure people thought I was cruel, but he was just so funny.  I think by me not panicking  Eli was able to stay calm.  He got a little nervous just a couple of minutes before Eric showed up, but I distracted him by having him make letters out the Twizzlers.  See, there is a silver lining everything.