This is a very long overdue post, but today I'm feeling sentimental so I thought I would write. 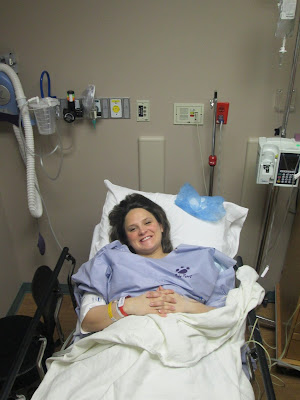 Finally, it was time to wake, shower and prepare for the day.  I did indeed apply full make-up, I mean I was for sure having a billion pictures taken!  Of course we were late leaving the house, but they couldn't really start without us - could they?  We left before the sun came up.  My mom and dad stayed with Eli and drove the van so we wouldn't have to change car seats around.  Despite going only a few miles, it was a long drive knowing your life is about to change, but we talked, we prayed, we wondered aloud about the precious daughter we were about to meet. 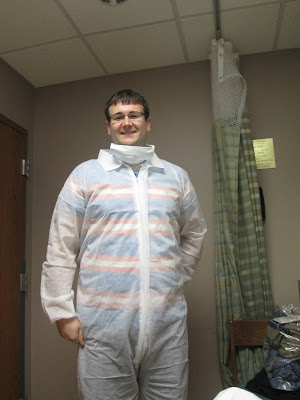 We finally made it to the hospital where I expected things to continue moving slowly, but that wasn't the case.  The nurses aid came is as soon as I was dressed to  fill out forms, sign papers, take my vitals and shave my stomach.  I'm not sure why, but that always embarrasses me.

Eric scrubbed up during that time as well.  At some point I felt a gush of water and thought maybe my catheter had come out, but it hadn't.  My water broke...how random is that? 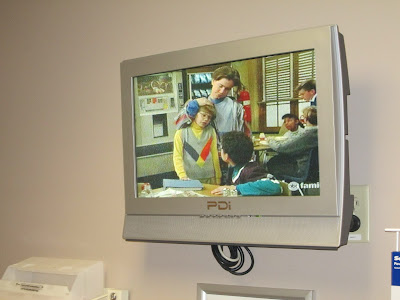 We passed the rest of the time watching Boy Meets World and just talking.  It was one of those tender moments shared between husband and wife that will forever be etched in my mind.  At some point the nurse came in to tell me that doctor was running early.  I called my parents to see where they were, and they hadn't even left the house!  I was a ball of nervous energy praying they would make it before Ellie made her debut!

Eric's parents made it back to pre-op just a few minutes before I was wheeled off, and I think it did a lot to help Eric's nerves.  Then came the long trip down the hall and the part we both dreaded -them making Eric wait while they prepped me.  I hate that part.

I was nervous about the epidural because I wasn't in any pain, but the nurses and anesthesiologist were wonderful, and I hardly felt a thing.  Once I was situated on the table with the curtain up, Eric was allowed back in, and he took a spot next to my head.

We really didn't talk much through the whole thing.  I think we were both just waiting to hear that first precious cry...and boy did she cry!!  Finally, at 7:58 am sweet Elizabeth Victoria Watson entered this world! 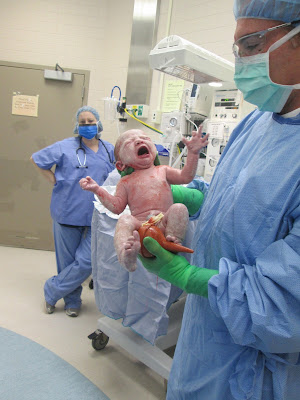 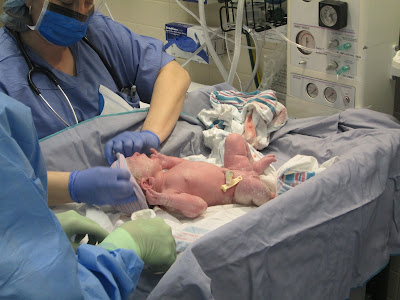 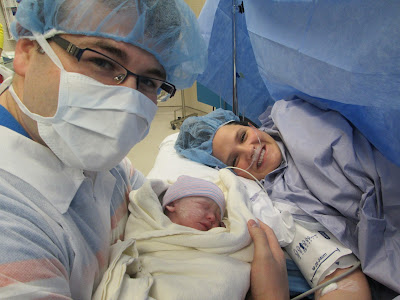 Unlike when Eli was born, I was totally aware of everything going on.  In fact, the anesthesiologist was so wonderful not to give me any medications until well after Ellie headed to the nursery.  With Eli's c-section being a true emergency, I was put under as soon as he was born.  I loved being awake, hearing the lulliby played, getting her stats, and holding her. 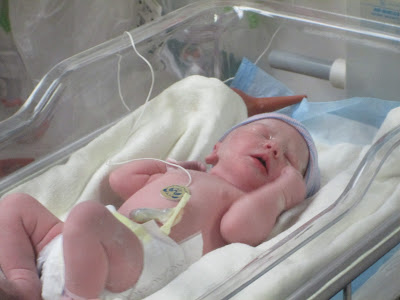 Of course Eric had to take her out while they finished working on me.  I remember bits and pieces, but I was trying to nap because I wanted to be rested for the company.  However, the recovery room nurses recognized me from tv and asked about a billion questions.  Oh well, I rested later.

They also made up for their chattiness by letting call the waiting room. With Eli's birth, Eric said the worst part was wondering how I was doing in recovery.  When I told them why I wanted to call by husband, they were so kind to let me do so. 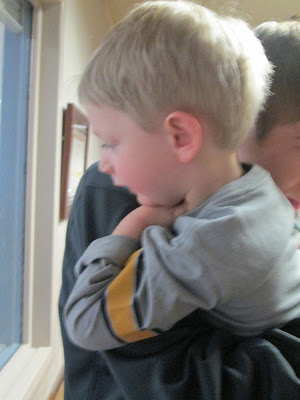 I hate that I missed Eli's reaction to seeing his sister for the first time, but I'm blessed my parents and in-laws documented it with lots of pictures and video.  They said he kept asking where her "goober was."  Ha! That's what we call boy anatomy in our house.  Silly boy!

As I was being wheeled from recovery, I saw Eli looking through the nusery glass window.  He came running  up to me with a sweet balloon that he bought at the gift shop.  I left it deflate once we got home, but I saved it.  It was another precious moment that I will always remember. 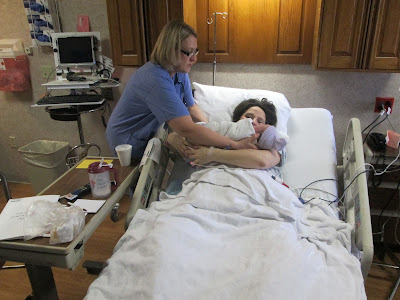 They finally brought Ellie into the room, and I was able to share sweet moments with both of my babies.  There are simply no words to describe that feeling of utter joy as I sat there holding these precious children who doctors told me I would never have.  God is so very, very good! 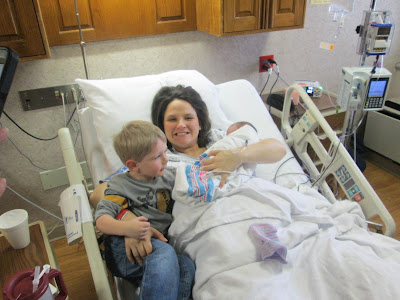 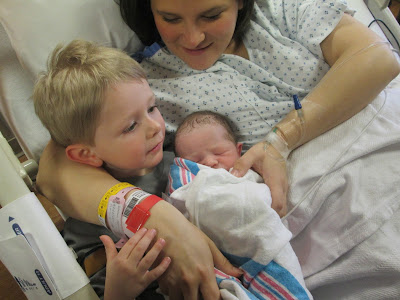 Of course my moment was short lived because we had a room full of people eager to get their hands on Ellie.  My mom was sick and couldn't hold her, but everyone else passed her around.  My sense of time is a bit off because of the medications I was getting loopy, but at some point, Eric went out to eat with his parents and Eli while my parents, grandmother, and brother stayed with me.

It was during that time that I dressed my girl for the first time, and put in her first bow.  Oh how I dreamed of that moment!  Ellie's body temperature started dropping, and the nurse had to take her back to the nursery to be put under the warmers. My parents decided that since it would be a while before Ellie could come back, they would grab a bite to eat with my grandmother and brother while I rested. 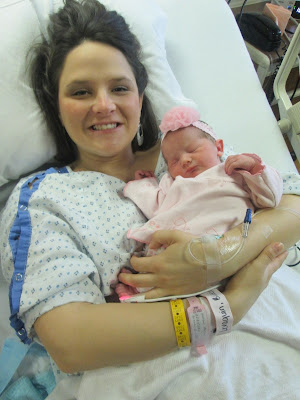 Eli, Eric, and his parents ended up passing my family in the elevator, and returned to the room to help keep me company for a while.  It was such a joy to be surrounded by family.  My parents left early afternoon, and my in-laws were right behind them.  In a last minute decision we let Eli go home with them for the night.  I hated to see him leave, but I knew he would be much better off.

After everyone was gone, Eric and I got a few minutes to nap before Ellie came back.  I enjoyed those moments alone getting to bond with her and talk with Eric.  It was precious to me. 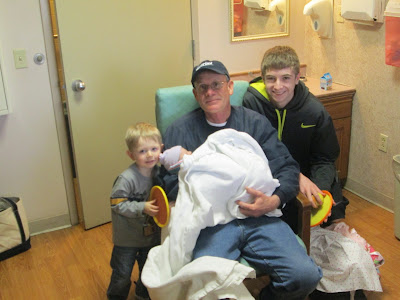 At some point, although I have no clue when, Eric went home to pack a bag and let the dog out.  Again, we had originally planned on Eric staying home with Eli, but with the change of plans, he was able to stay with me.  While he was gone a friend from church stopped by, and Tina came by with Owen and Parker.

They each brought some goodies and I finally got that diet coke I'd been craving!  Once everyone left for the night, I talked the nurses into taking out the the IVs so that I could sleep better.  I walked around bit, held Ellie some more, and got ready for bed.

Another moment that will forever be etched in my heart is sitting alone with Eric in that dark hospital room, watching Andy Griffith reruns, and snuggling the sweetest baby girl.  We weren't worried about schedules, or clocks, or anything.  We were completely immersed in that moment of time.

It was one of the best days of my life.