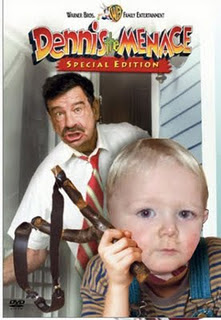 I swear, there are days when I expect to hear Eli say, "Hey, Mister Wilson," at any moment.  Ha!  Please tell me you know that's a reference to "Dennis The Menace."

I'm not even lying.  This kid can get himself into a lurch in about five seconds flat.  I'll never forget the week I realized that we a little Dennis on our hands.  It was the summer before Eli turned one, and he was crawling everywhere.  I actually put him in the dryer (turned off and not running) while I was folding laundry.  Ha!  No worries, I used to play in the dyer too, and I turned out fine.  Still questioning my parenting skills?  Last year a dryer saved a kid's life when he got in it to escape a tornado.

Moving on - that week Eli had been into everything (including the dryer). Baby gates don't work with our floor plan, so I was letting Eli crawl around while I folded laundry.  During that ten minutes he managed to unroll a thing of toilet paper, discover the water in the toilet, empty out a tool box, and unfold all my fresh laundry.  I would literally get him out of one thing and he would be into his next mess before I could clean up the first one!

I thought we might outgrow these Dennis The Menace tendencies, but that wasn't to be. Of course Eli's little adventures have resulted in several stressful moments, a few injuries, and even some broken household items which we do not want to talk about right now.  These moments have also kept us laughing at our boy's misfortunes and provided us with parental "glory stories."  Such was the case today.

I picked the kids up from daycare, took them to McDonald's for lunch, and headed to the library.  Eli quickly grabbed a book and climbed to his perch in the reading tree house.  He does this EVERY SINGLE TIME we go in there.  He also works puzzles, plays on the computer, and wonders through the kids area.  I mean it's a library, how much trouble can a kid get in?  Apparently, a lot if your name is Eli!!

Honestly, I wasn't too shocked when I heard a loud thud followed by crying, I mean it is Eli we're talking about here.  I was however shocked when I looked down to see my boy with a giant rug burn on his forehead and a bloody nose!  I handed Ellie off to the librarian while I rushed Eli to the bathroom to play Momma nurse. A few minutes later he was fine, and we were on our way home.

Fast forward to this evening when we decided to take a little family swim.  I got in the pool with Ellie and had my back to the ladder. Eric was about to get in with Eli when I heard my boy say, "hey mom!!"  I immediately realized Eric wasn't in the pool yet.  I also knew by Eli's tone that he was about to jump in.  Before I could yell for him to stop I heard the splash.  Ya'll, the kid (who can't swim) jumped in the pool WITHOUT swimmies!!!  Again, what the heck was he thinking?

I was literally standing right beside him, so I grab him easily. Actually, the shock of it may or may not have caused me to momentarily panic and scream like a crazy woman before I realized that this was not an urgent situation. However, for a split second you would have thought he was sinking with the Titanic.  I mean he cried for a good ten minutes!!  When he finally calmed down, I asked why he jumped in without his floaties to which he replied, "I forgot them."  Again, REALLY?

Ya'll we are super safe and never let him play without his swimmies.  Heck, we even take the ladder out of the pool when no one is in it. I mean, you just take chances when you have an Eli in your family.  So, I have no idea why he jumped in, guess he's just being honest...he forgot!

Needless to say, before bedtime we had a little chat about making wise decision and thinking before we jump.  Let's face it, both of Eli's dramatic moments today involved jumping! This boy may keep us on our toes, but he's always good for a laugh too!
at 9:09 AM