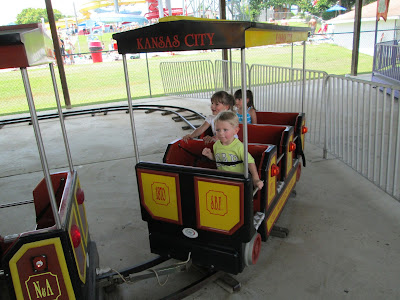 Today was Eric's company picnic at Beech Bend Park.  We've always had great luck with the weather, but this year it was little hot and the crowds were higher than normal.  Still, it was a great day to get outside and make memories.  I will say this, taking two is sooo much harder than dealing with just one.  We are officially taking applications for those interested in tagging along at Disney World...ha! 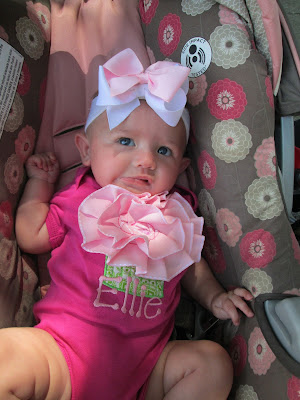 We walked around the park at least three times letting Eli ride anything we wanted...the School Bus, The Tea Cups, The Bumble Bees, The Dizzzy Dragons, The Flying Elephant, and the Choo Choo train were among this year's favorites. 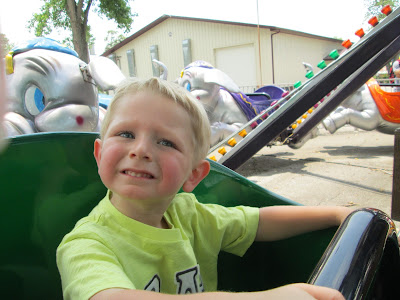 I rode along with Eli on almost everything while Eric watched from the side with Eli.  Honestly, I didn't take too many pictures this year.  I forgot my camera bag at home, and getting it in and out of the diaper bag was a hassle.  I did snap the picture you see below of Eric and Ellie. 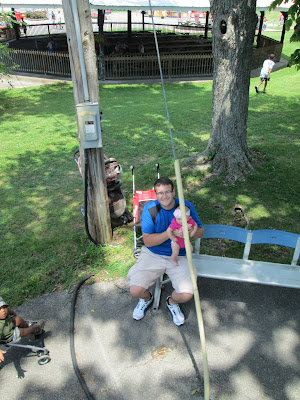 Eli and I were on "Dumbo" and I thought that this time next year Ellie will be 18 months old which is the age Eli was the first time we took him.  I'm sure she'll be flying through the air with us next year, and I wanted to remember how tiny she is now. 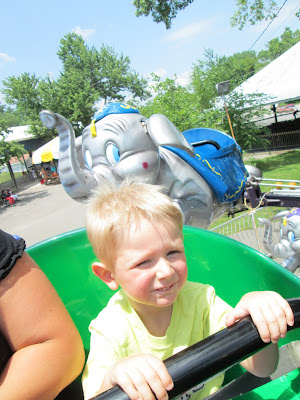 Ellie did get to go on the the Carousel with us this year..TWICE!  The first time Eric rode in an attempt to cool off, and the second time around I took both kiddos myself.  The music, lights, and motion of the ride proved amazing to a four month old. 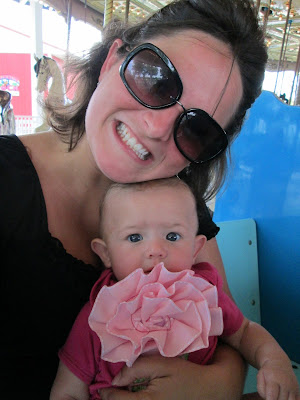 Eric was less than amused by the rides.  Crowded places just stress him out, but being the good daddy he is, he tried to take Eli  through the kiddie maze.  Ya'll it was a hot mess.  When they got to the top of the first slide Eric asked if Eli wanted to ride in his lap, to which our ever independent three-year-old said, "No, you go down first."

Upon instruction from our preschooler, Eric went down the slide first to catch Eli at the bottom.  In the process, Eric ended up with a burn on his arm!  This was before Eli announced that he wasn't coming down as planned.  In fact, he insisted that he would wait for Mommy.

Since Eric was unable to go back up, the slide, he was forced to go through the entire maze without a kid.  He looked like a creeper. Ha! As if burning his arm wasn't bad enough, Eric didn't realize that he was too tall for one of the entrances, thus he whacked his head on a pole before finally exiting the maze.

To round out this horrible experience, a wasp landed on his finger and stung him.  Haha!  Call me a bad wife if you will, but I couldn't stop laughing.  What are the odds?  Poor Eric ended up with a burned arm, bruised head, and swollen finger.

Oh well, that's how memories are made.  Thanks for taking one for the team, Honey!!