I can hardly believe that my baby boy will be turning FOUR in less than two weeks. In fear of being too cliche, let me ask you this....  Where did the time go?  Really, where?!?!

Anyway, with another birthday upon us, I have exhausted pinterest looking for party ideas.  This years he's wanted the following themes: Dinosaurs, Monster Trucks, Hot Wheels, Louisville Cardinals, Angels In The Outfield, Rookie Of The Year, and Super Heroes.  It literally changes every two days.  I finally made him stick with one idea, and he settled on....drum roll please...SUPER HEROES!!!

So with Eli in mind, I decided to plan a party that was all about him.  For starters, we are not having it at our house this year.  With family staying all night and two kiddos in the house, it will save a lot of time and stress if I have it elsewhere.  We'll be celebrating at the park...outside...where the kids can run free!! 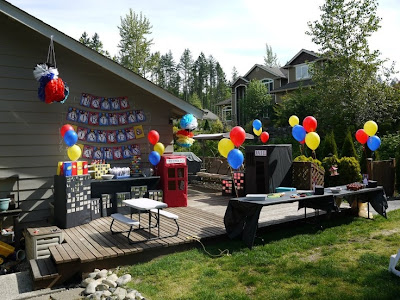 Obviously, this isn't a park.  I pinned it anyway because I like the use of balloons in primary colors as a focal point.  It will be a cheap and easy way to decorate the shelter. 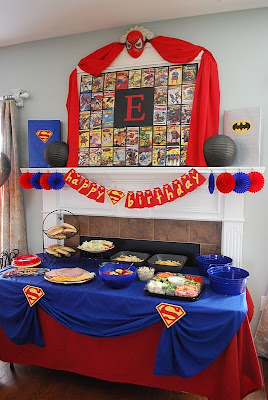 In addition to balloons, our Dollar Tree has plastic tablecloths that can be spruced up like the one you see above.  You would be amazed what $2 and a roll of Scotch Tape can do! 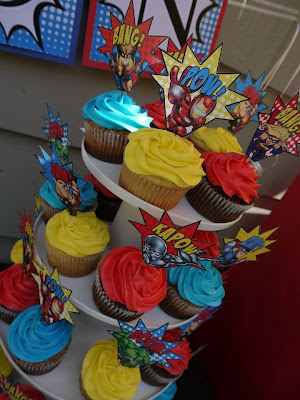 I think I'm going to order a few dozen brightly colored cupcakes from Sam's Club.  I'm going to add my own toppers like you see above.  They'll be simple enough to make, and the DIY project will save me a ton of money that I can use on presents. 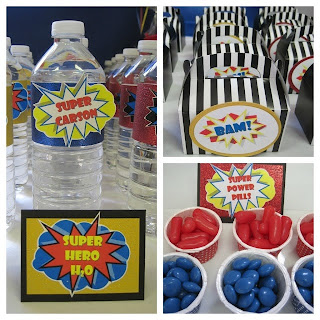 I also like the idea of candy being served in kid friendly sized containers.  Don't get me wrong, I love the beautiful tables I see on pinteresr with Apothecary jars full of goodies, but let's get real.  It takes a ton of money to fill them up, and who trusts a bunch of kids around glass?  Not this Momma!!!!

While I'm at the Dollar Tree, I'll pick up some cheap candy like in the picture above. 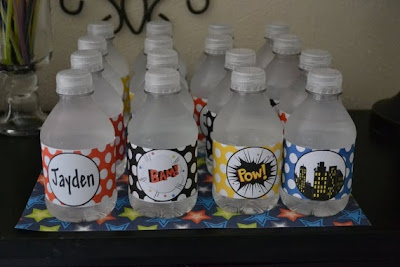 As for drinks, this will be an outdoor party, in August!  To prevent dehydration and to save money, I'm gonna pick up some mini water bottles and add my own labels.  Cheap, ease and fun!! 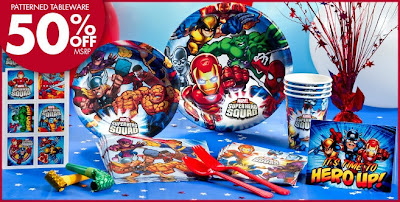 I'm not a huge fan of character plates and stuff, however, this is about Eli!  If he wants it tacky cartoon plates, then that's what he'll get...especially at seventeen cents a piece!!! 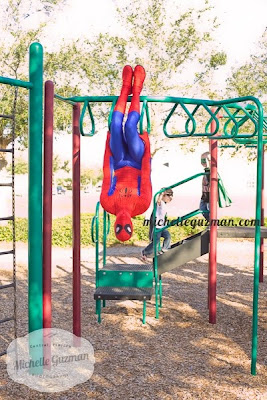 One final pinterest idea...an inflatable Spiderman.  Let's hope I can find one!!

Ya'll this is going to be a low key party.  Everything I need will be coming from the Dollar Tree or Sam's Club.  Eric will design the "add ons" and with a little creativity and glue gun magic, we'll have ourselves a party fit for a super hero!!!