Cause I Don't Want To Forget

I'm learning that a Momma's heart is confusing and complex place to be.  In it rages a battle.  On the one side, it beams with pride at every milestone a little one reaches, and it anticipates with hope what and who that child may become.  On the other side, that tender heart breaks at every milestone as her baby slips away into childhood and eventually adult hood. The wonder and hope of the future haunted by reality that time travels so very fast. 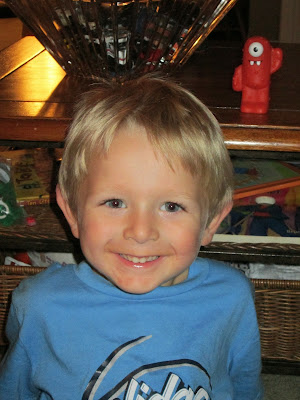 That was actually much deeper than I intended and is a poor reflection of what I wanted to be a funny post, but it's from the heart, so we will roll with it.

This little guy is growing up so, so fast.  He can count to 100, knows all his shaped and letters, and can write and spell his name.  I take no credit for any of this.  We have a wonderful daycare! 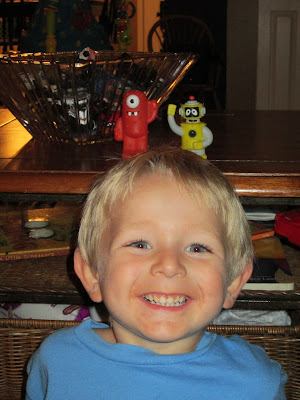 He is obsessed with Super Heroes, and claims to look like Captain America based on his blond hair. He still plays sports, but not as often.  When he does, it's usually golf or basketball.  Although, he's recently become interested in disc golf.

Other than that, he's very much into cars and monster trucks.  Sometimes he even pulls out his Cars 2 Toys and Dinosaurs, but it's rare.

I have succeeded in brainwashing him to think that every smoke detector in the house is a Santa Cam.  It's ingenious if I do say so myself.

One more (funny) thing I don't want to forget: The other day we were getting out of the van when a large truck started backing up, thus making a beeping sound.  Upon hearing this Eli yells, "Mom, who's horning at us."  Clearly he was confused as to what was going on and as to what word to use.