So here's something you need to know about me...I am not a Halloween person.  I don't have a problem with it, I just don't get into it.  If it wasn't for my kids, I wouldn't even acknowledge it.  So, you will excuse my poor attempt at a costume for Ellie. 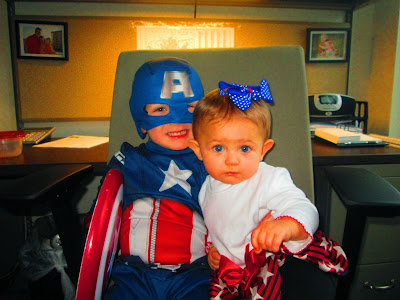 Eli is very into superheroes, so he was Captain America.  His costume was actually a birthday gift back in August, but hey, he loved it!!  Ellie is supposed be Captain America's sidekick which is a totally made up person.  I told you that I was lame.  The poor baby was one of the only ones in the daycare nursery without an outfit...epic mom fail.  Good thing she'll never remember. 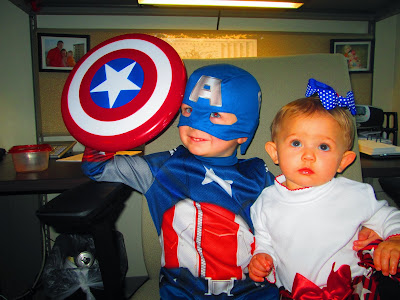 Eli, however, did dress up at daycare, and once I picked them up, he had a chance to go Trick Or Treating at Daddy's work.  He gets such a kick out of going to Eric's work.  Of course this was Ellie's first trip, but I think she liked it! 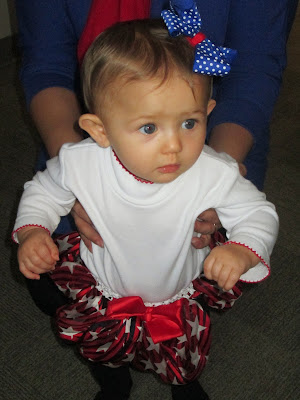 We rushed home from Trick Or Treating to load the car for church.  We didn't even get out of the van, Eric grabbed the stuff we were off.  It was supposed to be Trunk Or Treating, but we had severe storms and 50 mile per hour winds, so we moved it inside.  I kinda liked it better because we didn't have to worry about Eli wondering off and Ellie was about to crawl around too. 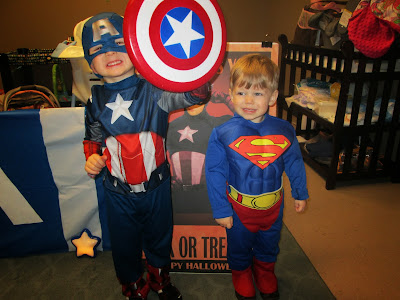 It was so busy.  Our town called off Trick Or Treating, so I guess all the parents decided to bring their kids to the church which was awesome!!  Eli loved seeing everyone dressed up, especially his buddy Griffin. The two were quite a team.  Even Ellie Girl had fun eating her very first sucker. 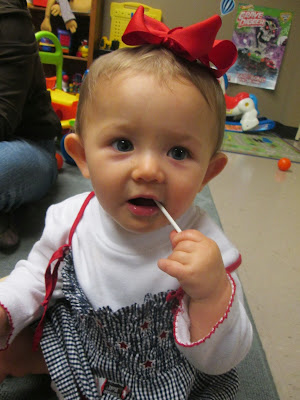 Even though I totally failed at the costume thing, Eric made up for it by creating some awesome posters to decorate the car with.  I'll show you his handwork tomorrow. 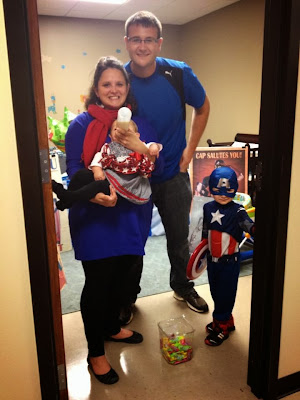