It's been an interesting 96 hours around here, and this picture pretty much sums up the way Eli and I feel about it.  Lets review; shall we? 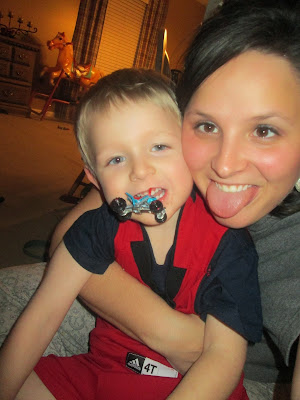 Friday: Eric called me at work to say that he was feeling bad, and  Eli had sores all over his mouth and wouldn't stop crying. I called the doctor to set up a sick visit thinking we dealing with strep or thrush, then I finished my interviews and rushed home.  On my way there Eric called to tell me that Ellie was throwing up.
So, I left Eric home to rest since he was sick while I loaded up both kids and headed to the doctor.  One tearful hour later we found out that we were dealing with two separate viruses.  LOVELY. On the way home I stopped at the Dollar Store for essentials like soup, Pedialite (sorry but I can't spell), and crackers.  The rest of the day was spent snuggling and taking care of sickies.

Saturday: Everyone was whiney, but appeared to be in better spirits, so I talked Eric into getting me out of the house for dinner and Wal Mart run.  On the way home we pushed our luck and looked at lights for all of 30 minutes.  We stayed up to watch a movie at which point I started feeling sick.  I thought it was from the Mexican food.  I was wrong!!  I had the bug too.  I'll spare you the details, but I spent some time getting acquainted with the toilet. Ha!

Sunday: Needless to say, we missed church on Sunday in fear of contaminating the entire congregation.  Luckily, both kids were in good spirits and seemed to be on the mend.  I wasn't up to par, so I rested on the couch and let them play. It wasn't awful...until midnight.  That's when Eli got sick with the stomach bug.

Monday: So here I am, exhausted but glad this is behind us.  I was up until four this morning taking care of Eli, so Eric took Ellie to daycare so that we could sleep.  The only problem is that Eli woke up at 8:00 sharp singing Christmas carols.  He's better, but still puny.  We're snuggling, watching movies, and sneaking in a nap while Ellie and Daddy are gone.