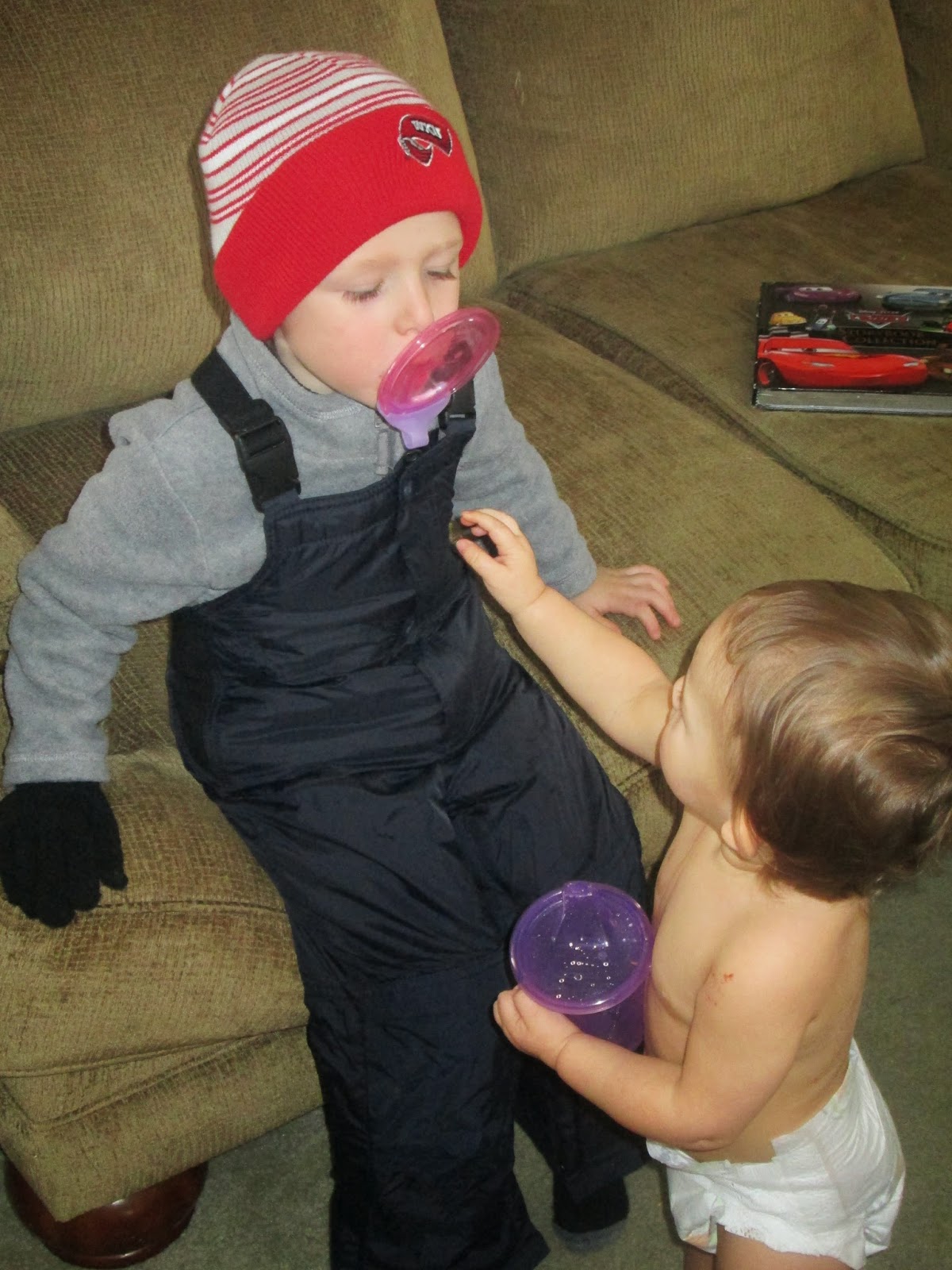 I know most of you are so tired of winter that you don't want to see snow again for ten years.  I get it, I really do.  The thing is, we live in what is known as the Bowling Green Bubble, and while most of you got more than eight inches above average snowfall for the season, we got two inches LESS than normal. So we've been holding out for the "one big snow." 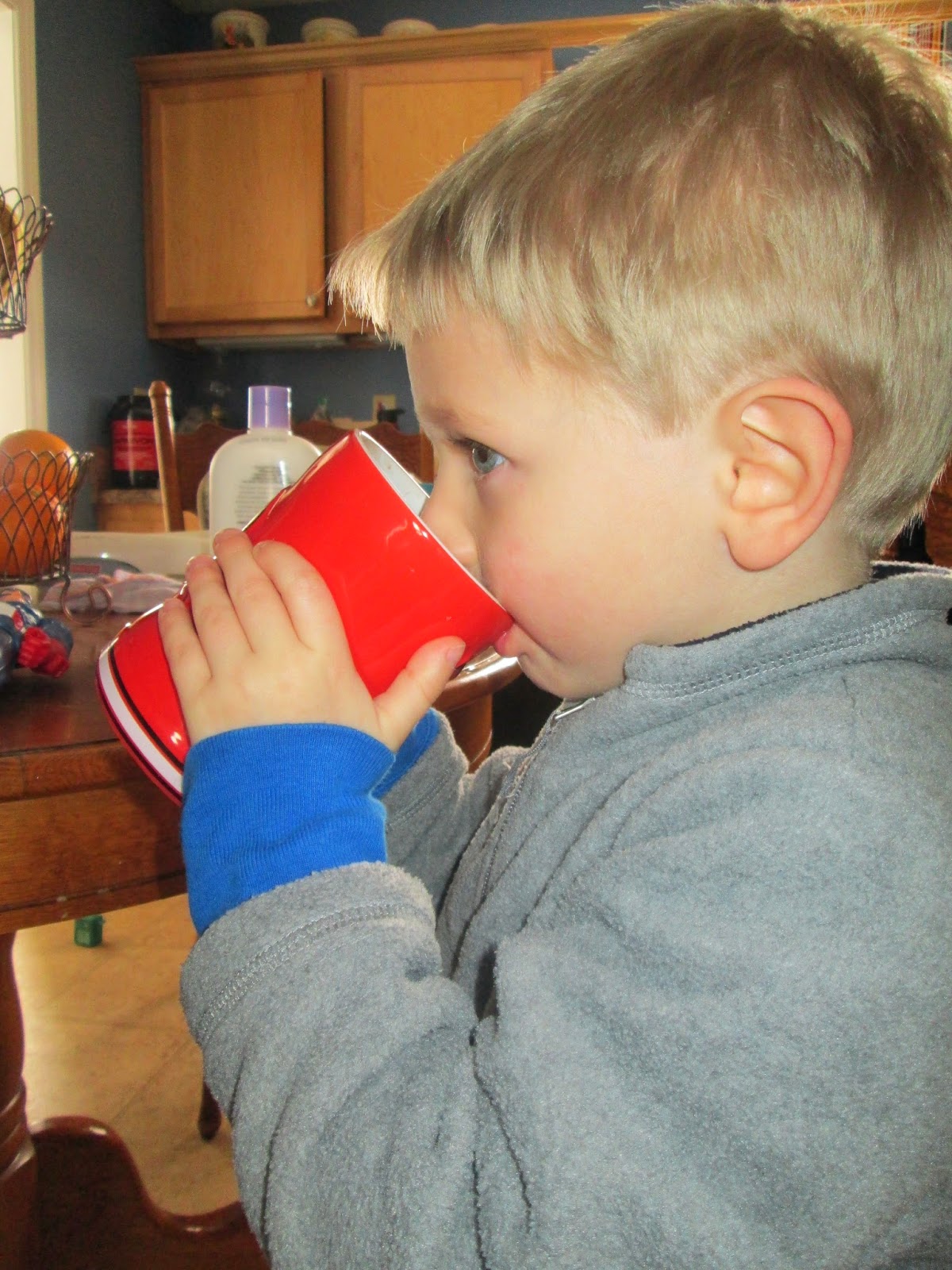 It arrived the days following Ellie's party, and we were quite literally snowed in.  Work actually offered to get me a hotel, but I knew I wouldn't be able to make it home for a few days which meant I would miss Ellie's real birthday.  I wasn't about to have that happen, so I decided to stay home. 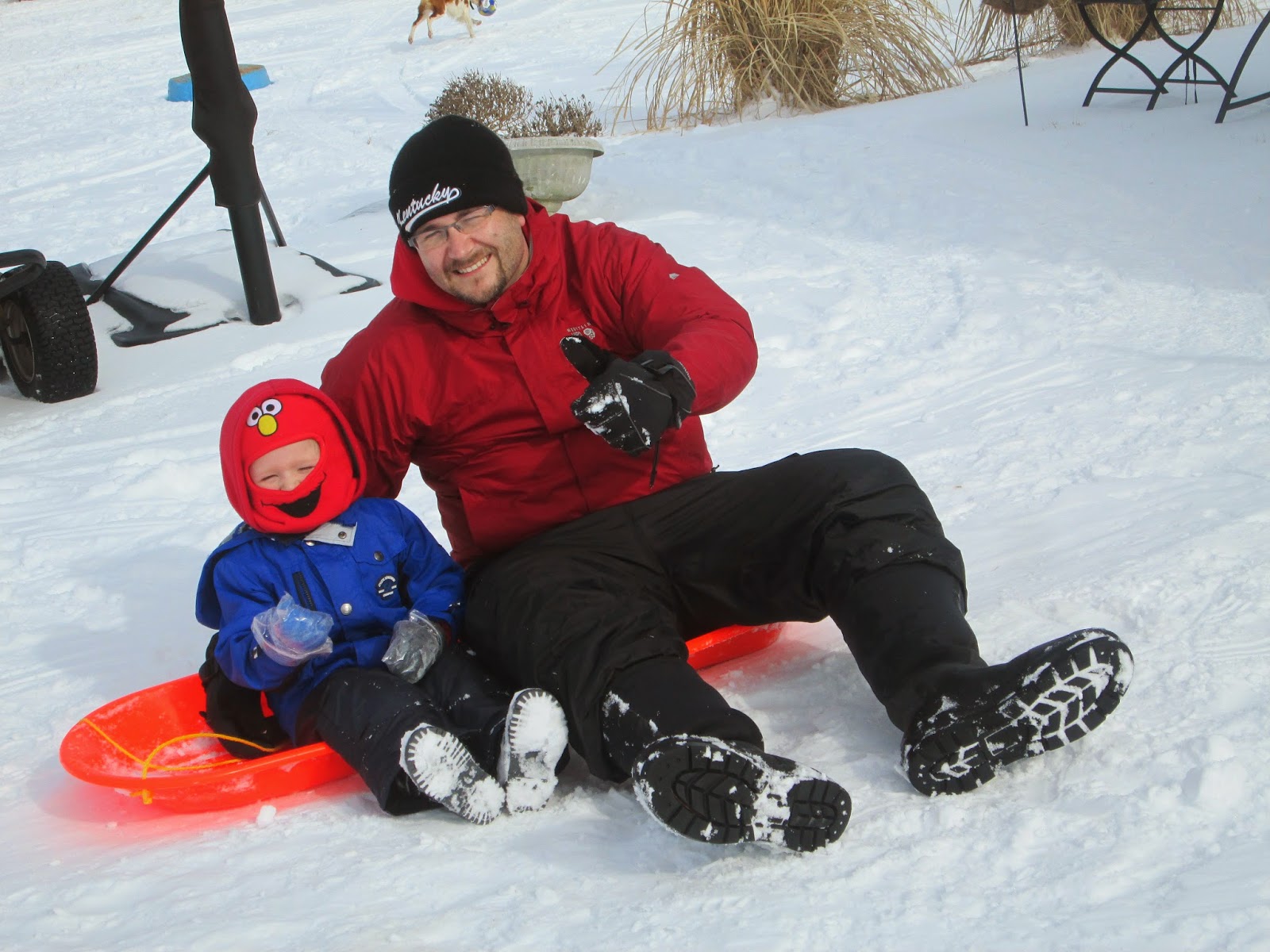 I am so, so grateful for that choice.  Our road was completely impassible, so Eric stayed home too, and we spent the next two days together as a family making precious memories. For example, I could not find Eli's waterproof gloves, so we put sandwich bags with rubber bands over his hands. Ha! 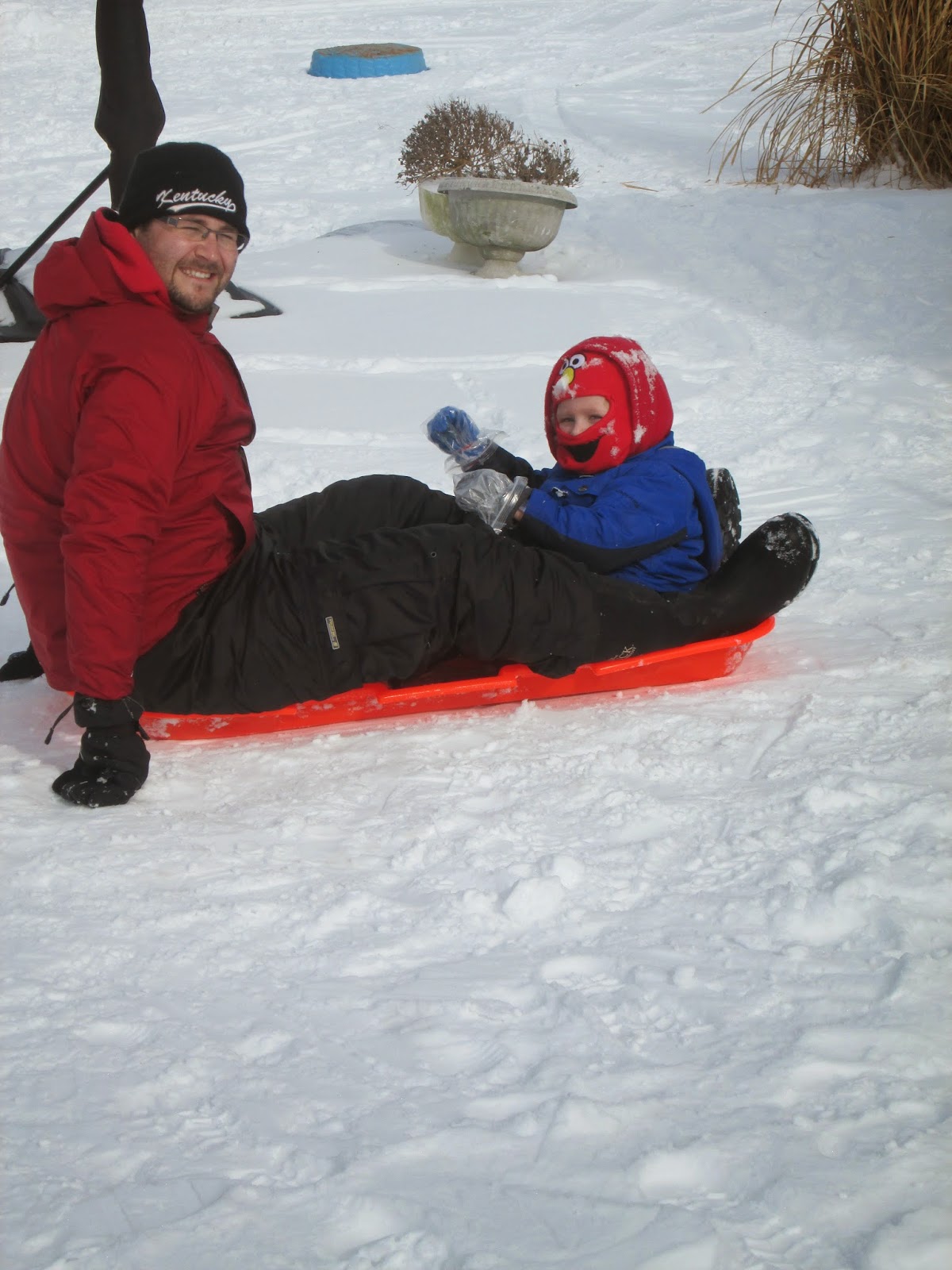 Eric played outside with Eli pretty much all day long.  They would turn the heater on in Eric's building and go in there to get warm and eat snacks.  That left me and Ellie with plenty of time inside to play, catch up of housework, and watch TV.  She spent much of her time looking out the window...bless her heart. 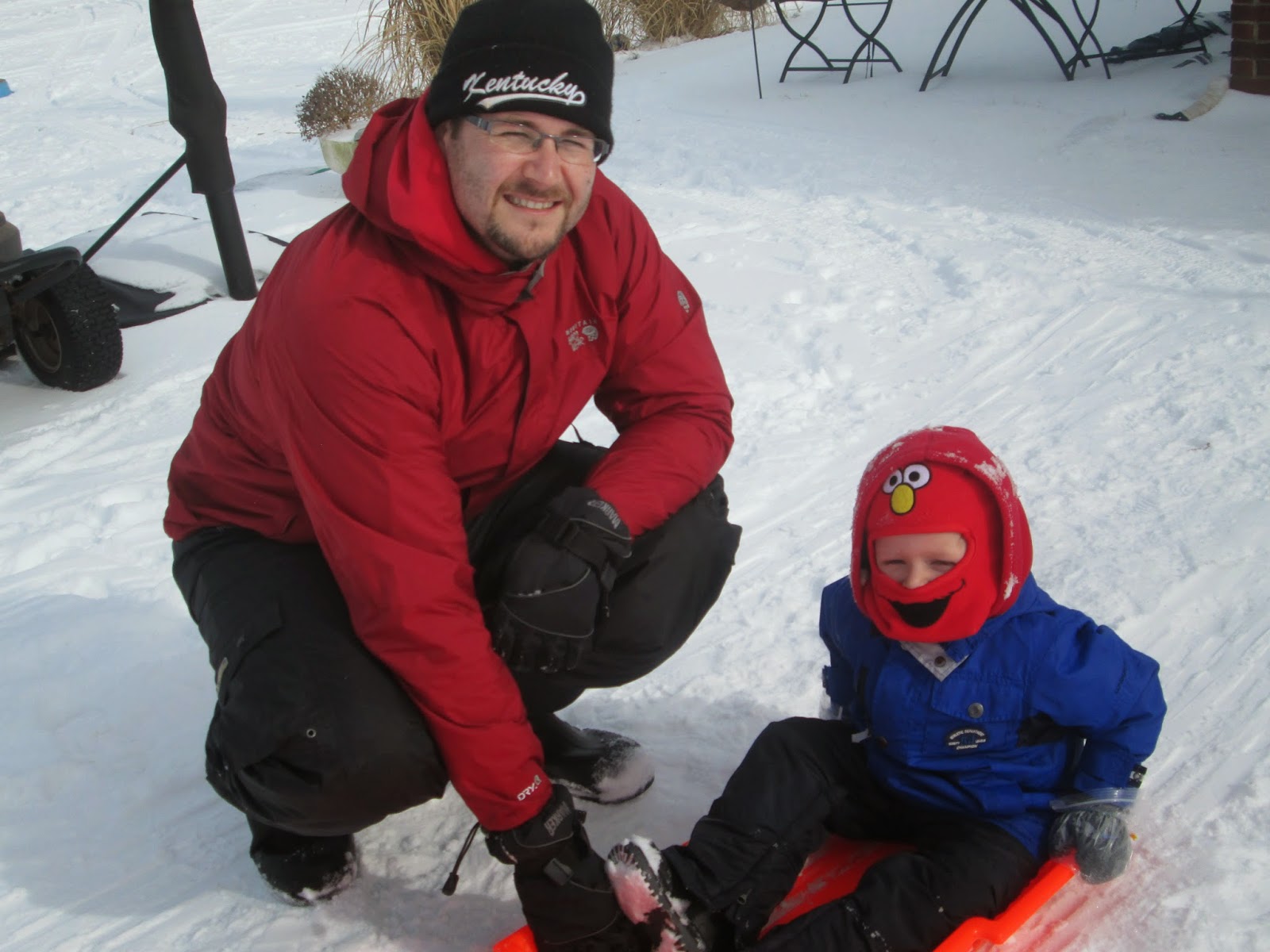 Eric pulled Eli behind the lawn mower on a sled.  Then they built a little jump on the side of the yard and spent literally HOURS playing on it.  They would literally come in for dinner and then head right back outside to play in the dark, which was Eli's favorite part. 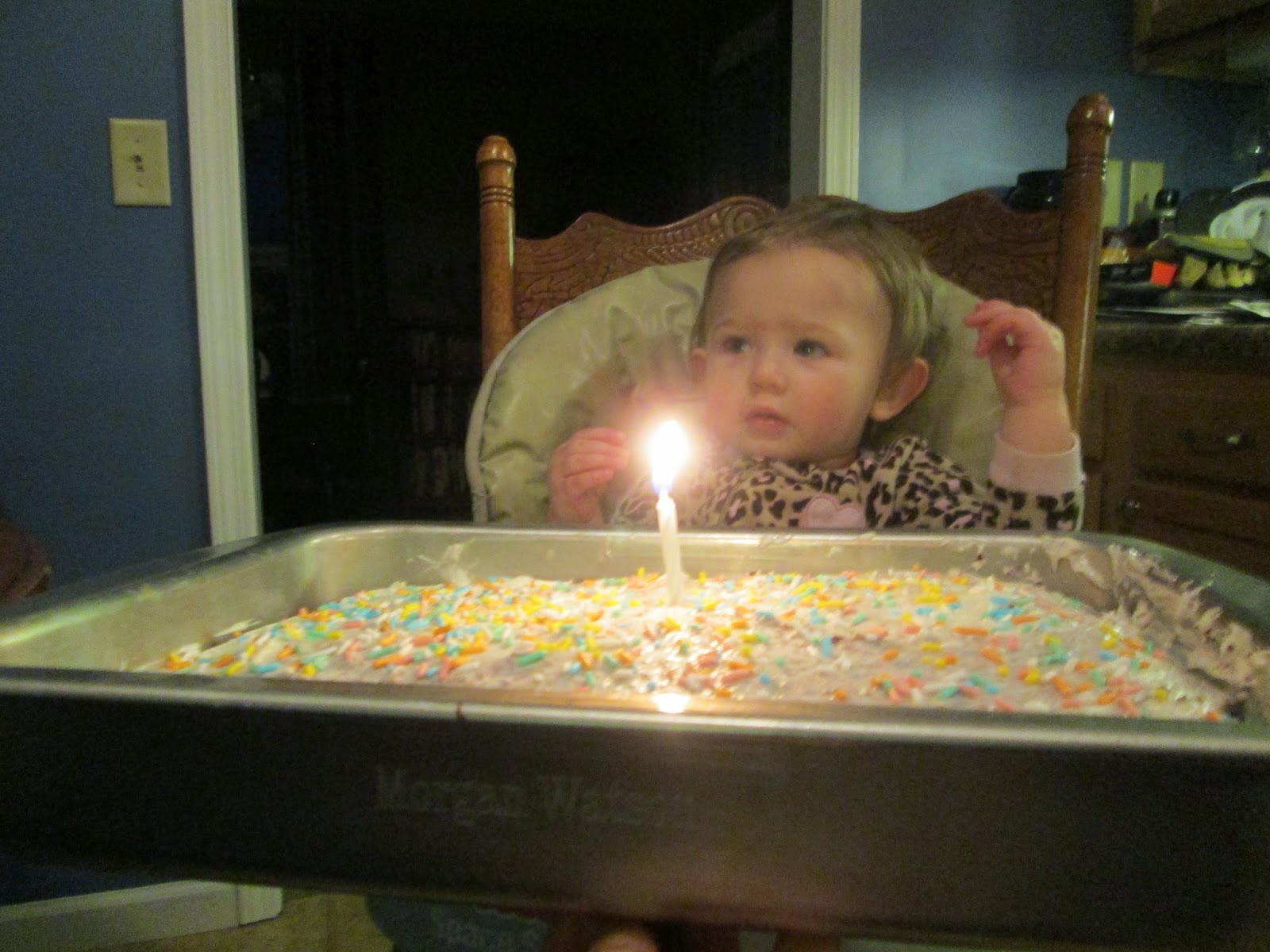 The second day we were snowed in was Ellie's real birthday, so we celebrated with hot dogs and Mac n' Cheese which are her favorite foods.  Oh yeah, Eli helped me make a cake too!! 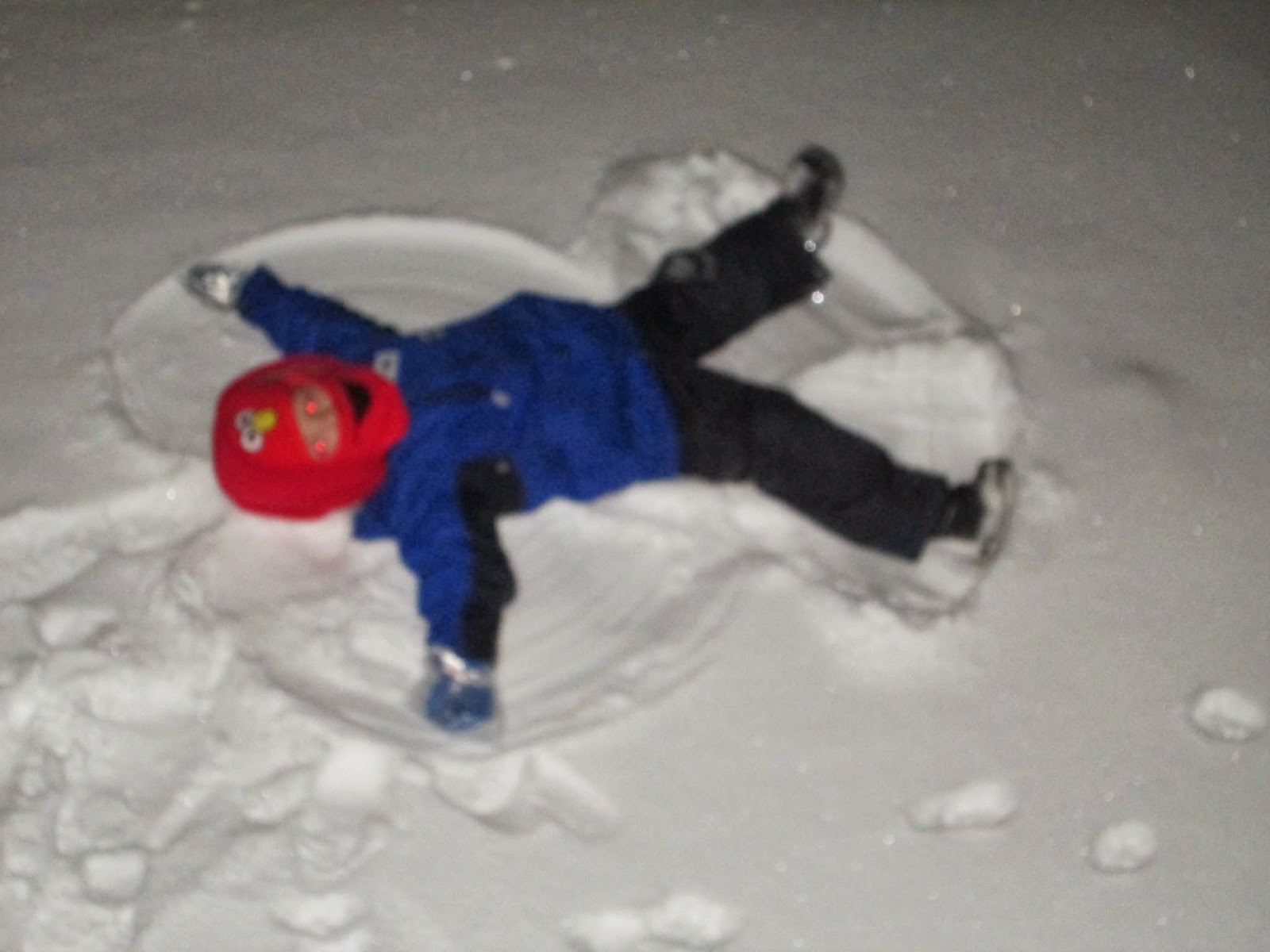 By Wednesday the roads were passable, so Eric and I went back to work.  Church ended up getting cancelled, so that meant more time to play in the show. 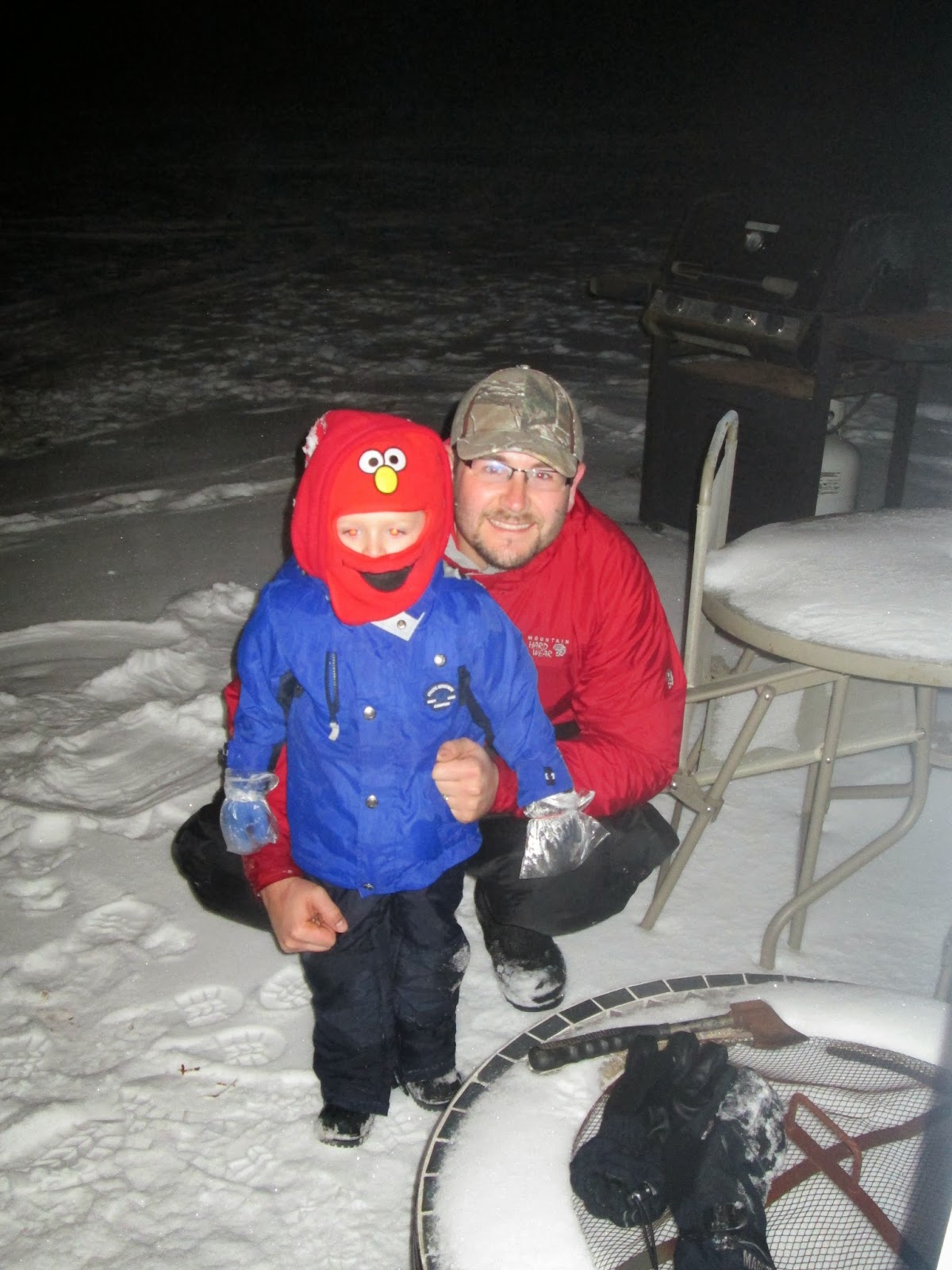 I felt bad for Ellie because she had really been wanting to go out with the boys, so I decided to find Eli's old coveralls and take her out for a few minutes. 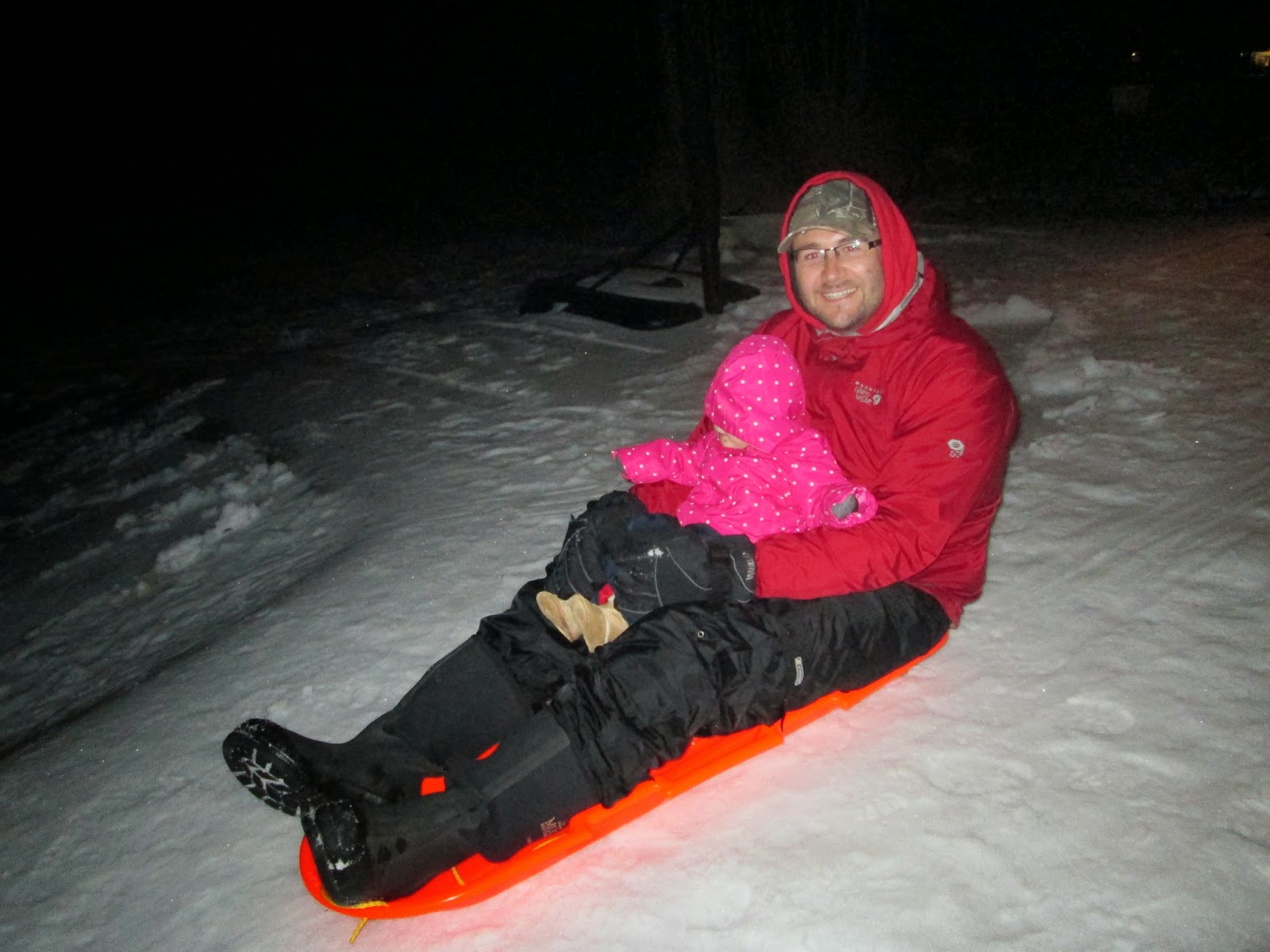 She was not a fan of being bundled up, but she seemed to really like sledding with Eric.  Ya'll I got a good one...he is such a good Daddy! 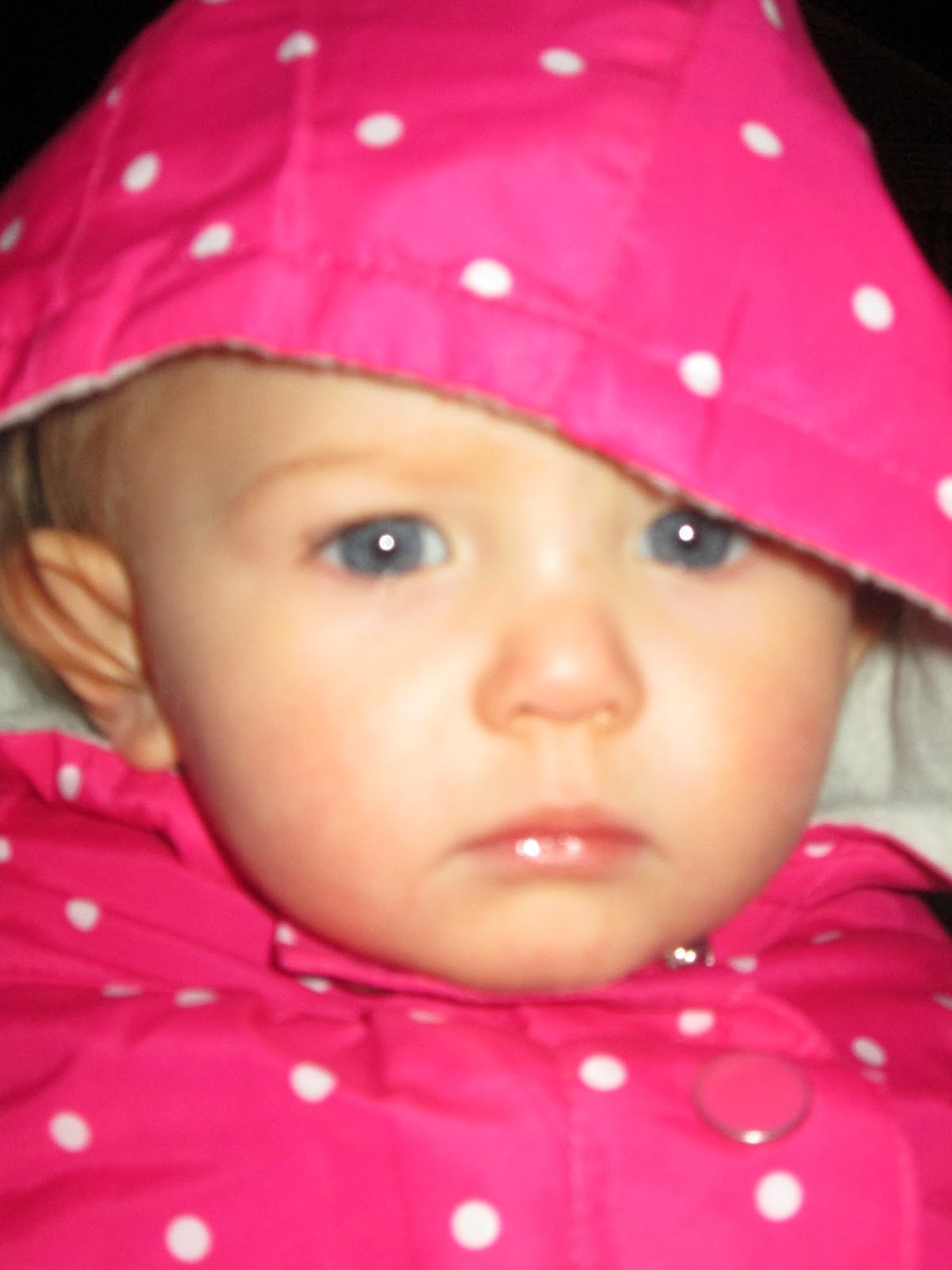 She spent a little more time watching all of Eli's tricks which he was getting pretty good at by day three. 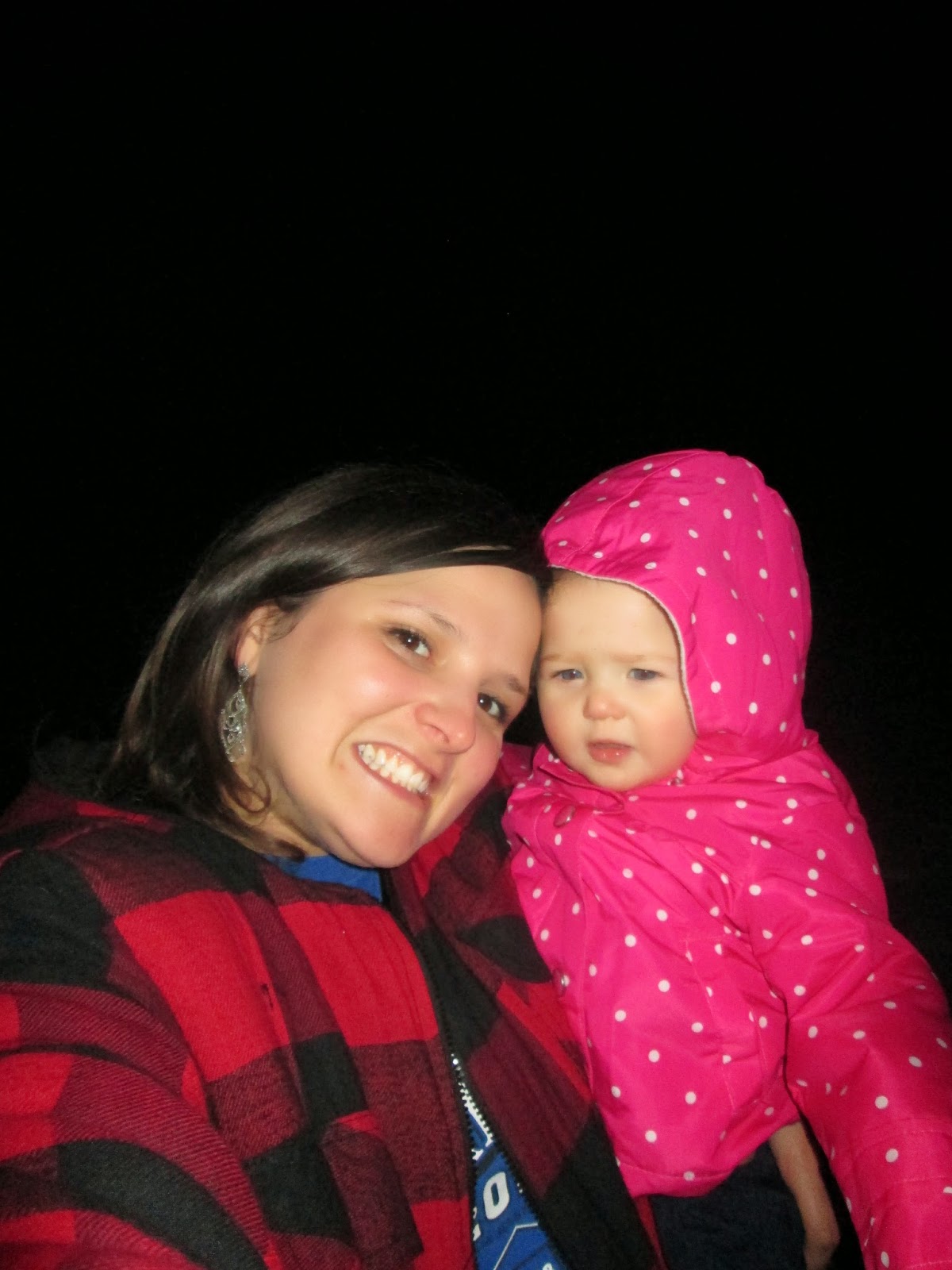 She didn't last too long in the cold before she was ready to go in, but I'm glad she cooperated enough to let me take a few pictures before we went back inside. 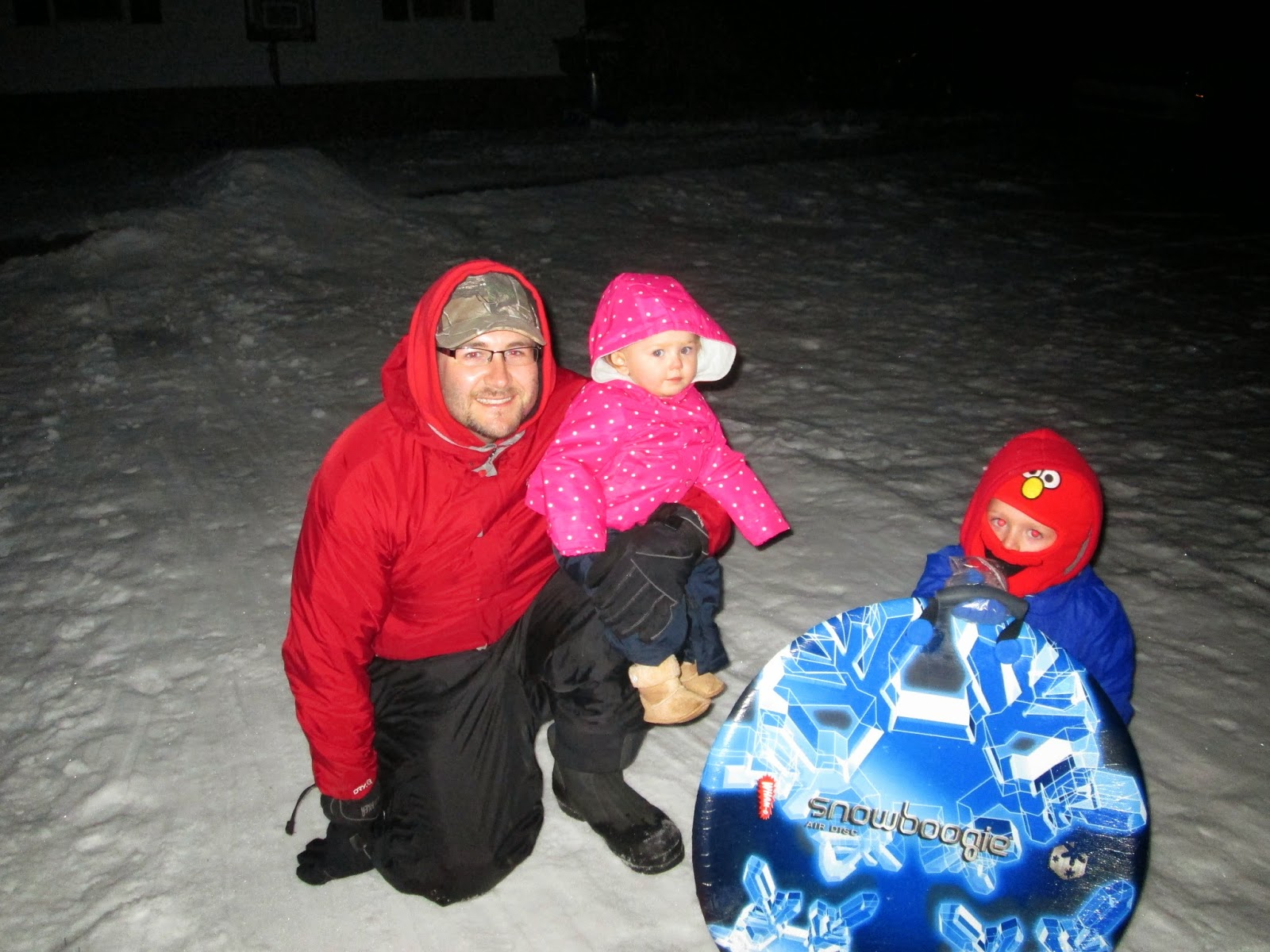