I'm not sure if I mentioned this in any of my previous posts, but we opted not to do the Park Hopper passes while we were in Disney.  It proved to be a wise choice because given the ages of our kids, one park was more than enough for each day. 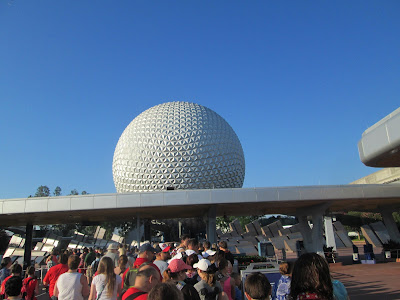 All of that to say that on Tuesday we went to Epcot. It ended up being my least favorite day and my least favorite park.  It was so, so hot, and there was very little for the kids to do.  I think I would have enjoyed exploring the countries had it just been me and Eric, but it was just too much to deal with for the kids. 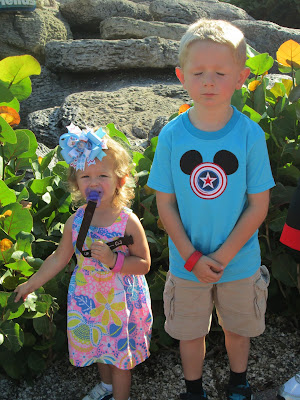 We woke up bright and early for Magic Hours, which was probably not the best decision given our late night at Magic Kingdom.  Nonetheless, we towed two exhausted children to the park opening.  Epcot tiers their Fast Pass options, so you are forced to choose between their two main attractions, Test Track and Soarin'.  We opted for Soarin because we knew that Eli would ride it.

Lucky for us, we were able to squeeze in Test Track after running to the attraction at Rope Drope.  Eli was on the fence about riding, so the Rider-Swap option was out.  Instead, Eric went through the Single Rider Line while I waited with the kids, and then we swapped. 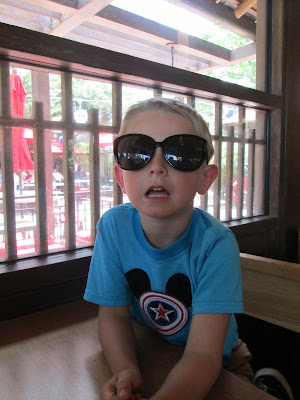 We went straight for Nemo when we got off and ended up having to wait because they didn't open the attraction until regular park hours started at 9:00.  It was kind of annoying that we got up so early for just one ride, but you live and learn.

After Nemo (which we loved) we walked through the aquarium and hit up the ride "Figment" on our way to Spaceship Earth.  I will say this about Epcot...even though there is very little for young travelers to enjoy, they more than make up for it by having little activities and play areas at the attractions so that the kids can play.  It was nice not being so rushed. 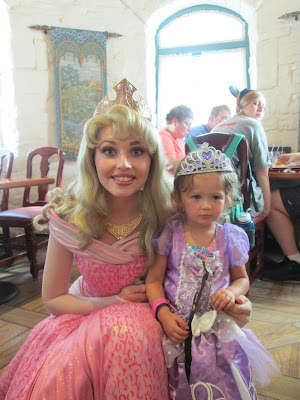 After Figment, we used out first Fast Pass on Spaceship Earth, which we all enjoyed a great deal.  From there we opted for a snack in the air conditioning while we waited for our Fast Passes to start on Soarin.  It was one of those little moments that ended up being really sweet.

Eric and Eli road then we did the Rider-Swap, so that meant that Eli got two turns!  We headed for the World Showcase for lunch and settled on sushi in Japan.  It was so stinking hot that we left the restaurant and went straight back to the resort, skipping our Fast Pass for Turtle Talk with Crush. 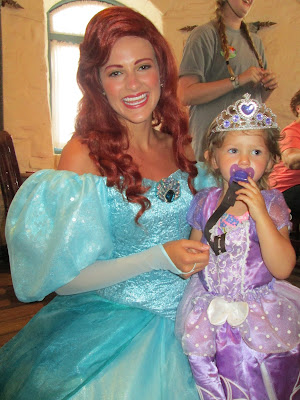 After short naps for all, we went back to Epcot for our dinner reservations at Akershus Hall.  It was truly magical because Ellie was in awe of all the princesses.  It was a precious moment for me because in all my day dreaming about my "future daughter" this was something I always wanted to do with her.  How amazing that I was blessed to experience these moments! 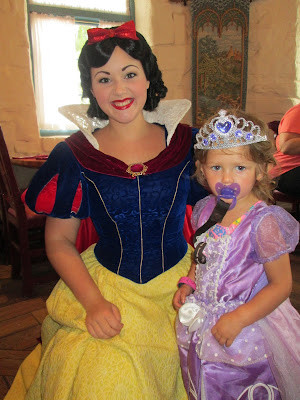 I know the paci is ridiculous.  We actually broke her of it, but a well-meaning individual gave it back.  We decided not to take it away again until after the trip so that we would have some peace in the car.  The problem is that the car turned into the park and the park turned into the pool, and now she is attached to the dang thing.  Not to worry though, we're quitting cold turkey this weekend! 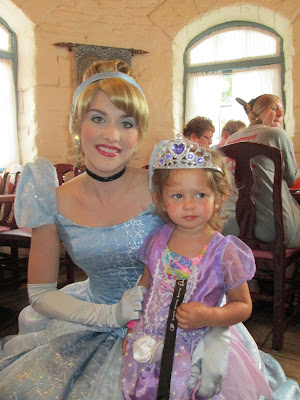 At one point all the little girls (and boys if they wanted) paraded around the room with the princesses.  Since Ellie was so small, she got to walk with Ariel, which made her a proud peacock.  Ha!  Eli opted to sit at the able and enjoy the amazing selection of cheeses and pastries! 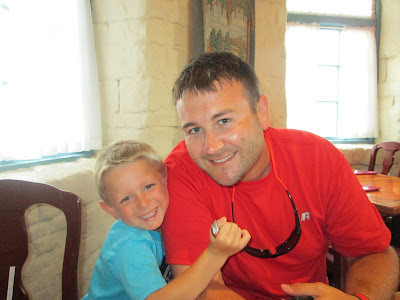 We tried to track down Mulan after dinner, but she was gone for the night.  Instead, we went back to the hotel for an early night, which proved to be a great decision because everyone was well rested for Hollywood Studios the next day.