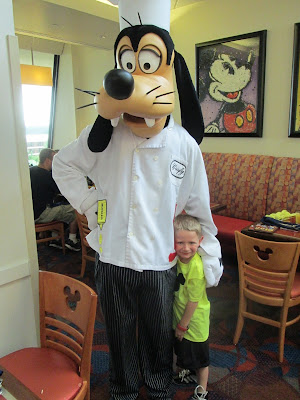 Friday was our last day in the parks, so we rounded out our trip with another day at Magic Kingdom.  I had planned a breakfast for us at Chef Mickey, which meant a late start. 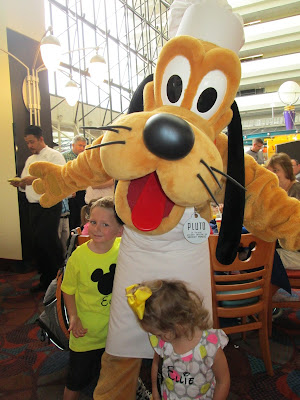 Eric and I had talked about canceling this meal because other than Pluto, our kids had met all the characters at some point during the week.  Well, I missed the window to cancel our reservations without being charged a fee, so we went.  It was the best decision. 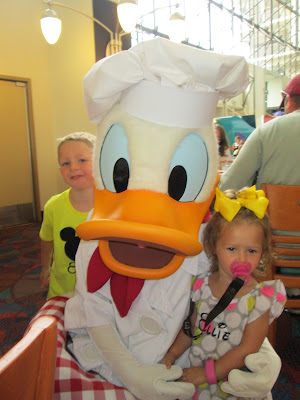 The atmosphere was so, so fun, and the kids loved the meal.  In addition to the traditional breakfast spread, there was a whole buffet dedicated to pastries! I would highly recommend this restaurant if you are looking for a breakfast location. 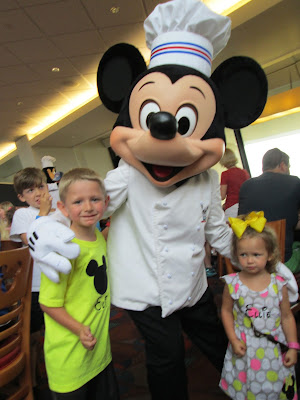 On a side note, this is where we ate when my parents brought us to Disney World as kids.  I still have the souviener cups they used to give out. I remember wearing a green and black polka dot romper with a side ponytail and celebrating my dad's birthday.  Ha! 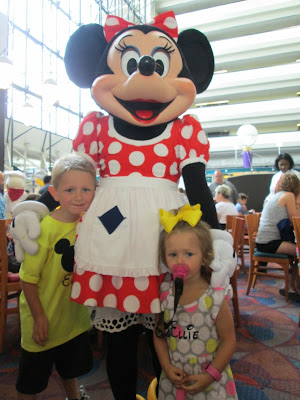 Our last day actually took some careful planning because not only were we getting a late start, we also had to split our Fast Passes up.  Ellie and I went to see Anna and Elsa while Eric and Eli did Buzz's Space Ranger Spin.  That part was easy.  Making our other Fast Passes for the same attractions and time slots jive was tricky, but I had it all taken care of before we left for the trip. 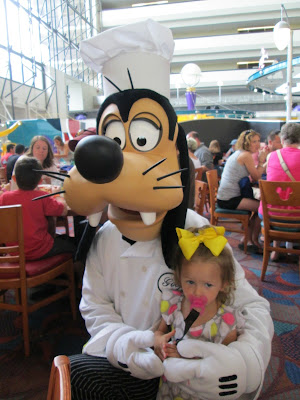 Back in Magic Kingdom, we went straight to Adventureland for Ellie to meet Jasmine.  She had talked about it all week long, so we caved in.  She and I stood in our longest line of the week (30 minutes) while the boys explored the area.  When it was finally her turn, Ellie was too starstruck to take a picture.  Go figure! 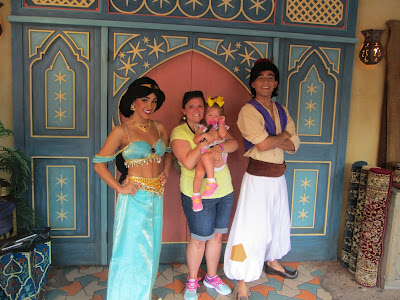 Eli wanted to ride Barnstormer next, so we headed that way.  Lucky for us, we discovered a short wait for Dumbo on the way.  We popped into the Big Tent to cool off and let the kids play while we stood in the standby line. 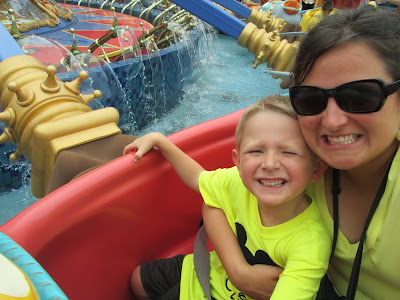 After Dumbo, Eric and Eli rode Barnstormer while me and Ellie met Goofy and Donald.  I felt bad when Ellie had to wait without entertainment, so I always tried to find something close by for her to do since she was too short for several of the attractions. 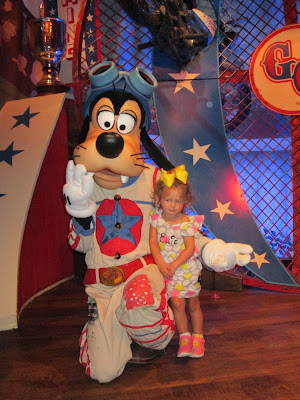 These Goofy and Donald characters are located next to Barnstormer and are always a short wait (15 minutes or so) if you're looking for an air-conditioned line or need to pass some time.  You can also chose the other line to meet Daisy and Minnie, but we had already done that on Monday. 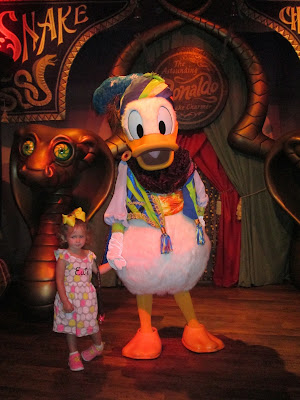 The Fantasyland Train station was right next to these attractions, so we jumped on for a whirl abound Magic Kingdom.  The kids were thrilled to ride a train, and it was a nice break from the crowds.  We rode around the entire park and departed where we had boarded. 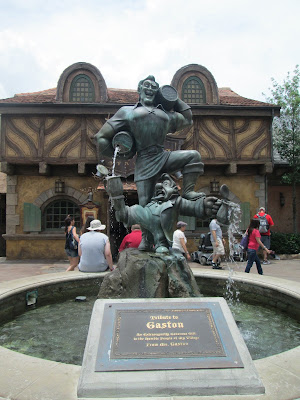 While we waited for out Fast Passes, we went to Gaston's Tavern for some water.  The details at Disney are second to none.  Just look at the theming and touches on this fountain. 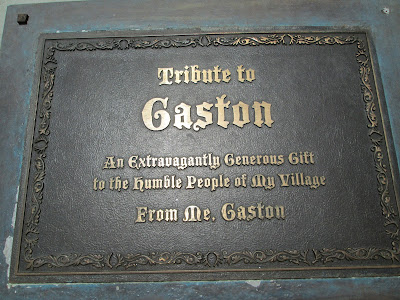 After our break, it was time for our first Fast Pass, Under The Sea.  It was just as magical as it had been before, and the kids were once again thrilled to ride.

We still had an hour before our next Fast Pass, so we went to eat at our favorite quick service restaurant, Harbor House.  After ordering, I took the kids upstairs to sit down while Eric got the food.  I'm not sure if it was the heat, or exhaustion or what, but they were rowdy.  They even got in some kind of argument while eating chocolate cake, so when they started hitting, it got all over their clothes.  I was not thrilled! 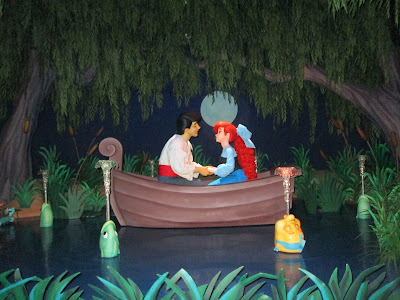 After lunch it was back to Fanatsyland for Enchanted Tales with Belle.  Neither one of my kids would participate in the play, so we were spectators.  Not to worry, they were thrilled to enjoy the experience.  Ellie even got her picture with Belle after the "curtain call." 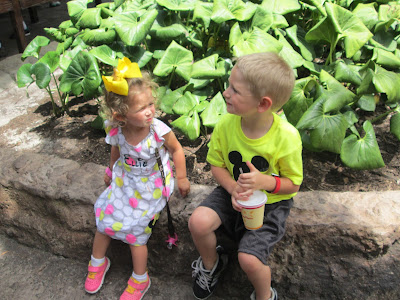 Next, we headed to Tomorrowland and walked right on to Monsters Inc. Laughing Floor.  We enjoy this ride a lot because it's always a new experience...never the same twice!  After our show, we split up to use our Fast Passes.  The boys hit up Stitch's Great Escape, Buzz Lightyear's Ranger Spin, and the Carousel of Progress.  The latter was Eli's idea.  Poor Eric hates that ride. 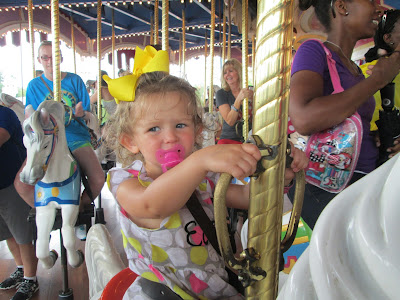 Meanwhile, Ellie and I did Prince Charming's Carousel before heading to meet Anna and Elsa.  We bypassed an 85 minute line, so be sure to Fast Pass this! 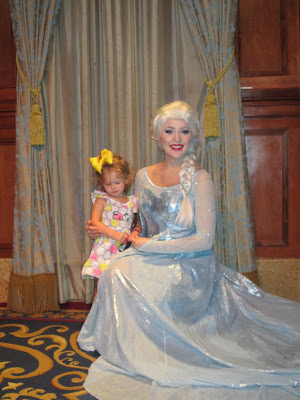 This little lady was so excited and perhaps a little overwhelmed. 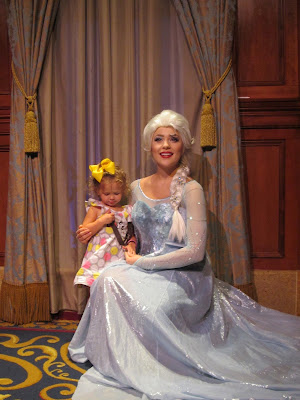 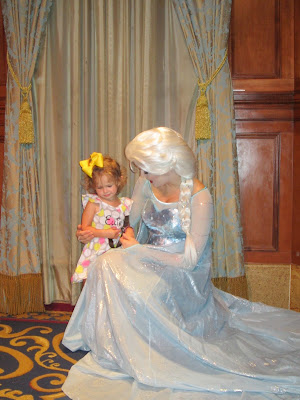 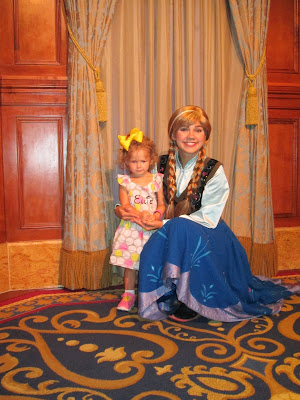 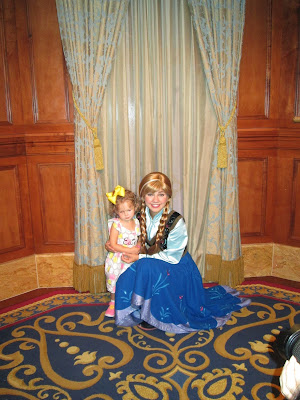 We had some time to spare while the boys finished their last ride, so we went to meet Merida.  She was so kind and good with Ellie, and really spent a lot of time with each guest.  I would recommend this meet and greet spot if you have little ones. 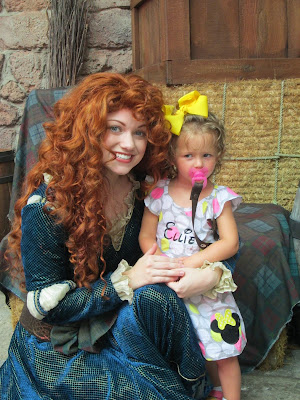 We all met back up for a ride on the Astro Orbitor, which was really fun!  We made it back in front of castle just in time for the afternoon dance party. 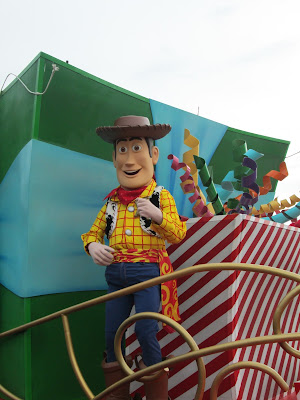 We stayed for a few minutes then went to Adventureland for a Dolewhip Float.  We ended up liking those more than the regular Dolewhip.  Ellie fell asleep on the walk over, so it was just Eric, Eli and me.   We found a shady spot and leaned Ellie's stroller back while we enjoyed our treat. 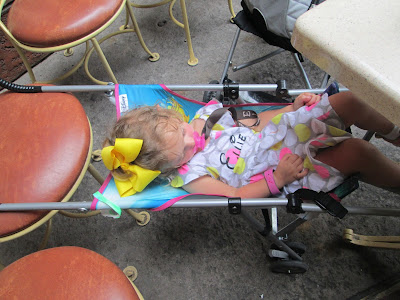 We all knew that it was getting time to leave, and in a way we were so, so ready to rest and escape the heat.  On the other hand, we knew that when we left, it would be "until next time."  We let Eli pick one final ride, and he chose Jungle Cruise.  We didn't have a problem getting a Fast Pass to accommodate this request, and we even had enough time for one more rise while we waited.  We chose Small World for Ellie's sake. 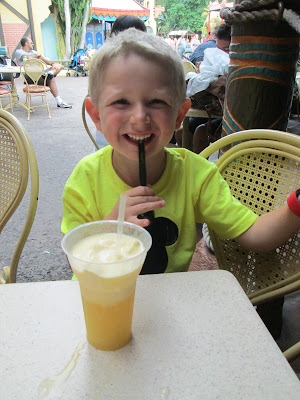 After Jungle Cruise it was getting close to time for the Electrical Parade, so we headed back to hotel hoping to avoid the chaos that swarms Magic Kingdom.  We grabbed a pizza in the four court and took it back to our room to enjoy.  Then it was a quick swim and bedtime for the kids.

Eric and I packed everything up (except what was needed for the morning), and loaded it into the car. We fell asleep as soon as our heads it the pillows, but were up again all too soon to hit the road bright and early at 5:30 am.  The kids slept the first two hours, so that was the most peaceful part of the journey home.  Ha!

It was certainly a most blessed week, and we are already looking forward to our next trip!