Sunday was our only "down day" while at Disney, but had I known that we would make such good timing on Saturday, I would have headed to the parks and relaxed a few days in.  Nonetheless, it was a lessoned learned, and a wonderful day with the kiddos. 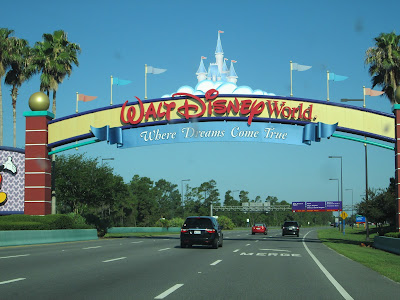 As we were leaving out arrival hotel (off property) to head to McDonald's for lunch, I got a text from our resort saying that our room was ready and telling me what the number was.  Even though I had done an early check-in online, I was honestly a little surprised because it was 8:36 when I got the message. 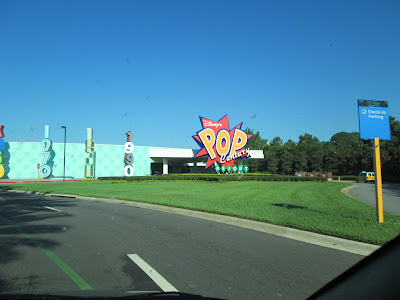 We decided to skip McDonald's and head straight for our hotel.  We stayed in Pop Century, which is  considered a "value resort."  I will wrap up my Disney posts with a little recap of our hotel, but I will say that it was a delight.

After checking in, we ate breakfast in the resort food court and then headed to check out our room.  I unpacked everything while Eric carried all the bags up from the car. 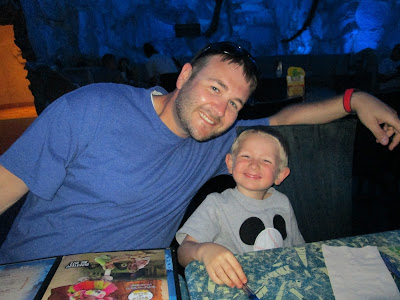 We had 11:00 lunch reservations at the TRex Cafe in Downtown Disney.  Eli had requested the restaurant, and it ended up being my favorite meal of the week.  AMAZING!  The best part was that when the $116 bill came, all we had to pay for was the gratuity.  Do the meal plan if you go! 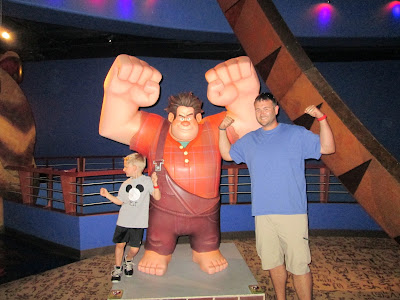 With full bellies we headed to the Disney Quest Arcade.  It's pricey at $40 per person, but we had two free passes, and Ellie was free too.  So it wasn't so bad coughing over the money for a child ticket.  It's four floors of virtual fun, and I would recommend it if you are traveling with "gamers" or if you need to pass some time. 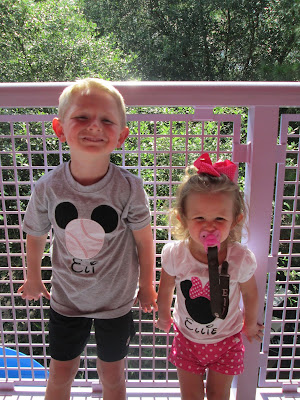 Ellie got a little cranky, so she and I headed back for her to nap while I unpacked.  I ended up waiting 45 minutes for a bus, which was not fun with a sleeping baby in 95 degree heat.  The good news is that after that, we never waited more than 10 minutes. 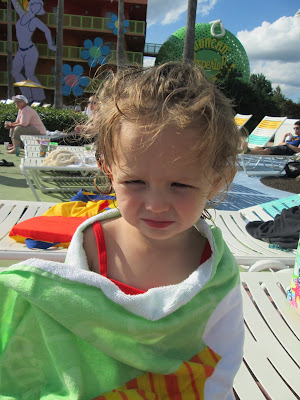 As soon as the boys got back to the room, the kids were ready to swim.  We skipped the pool in our section of the resort and opted for the main area in the middle of the resort. 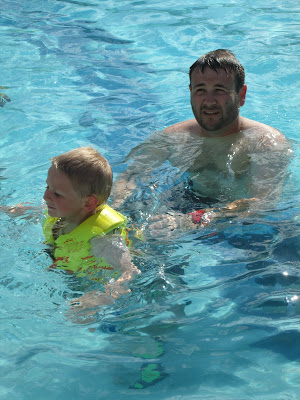 Disney offers complimentary life vests, which was perfect for our little people. So don't worry about packing pool floats if you're flying. 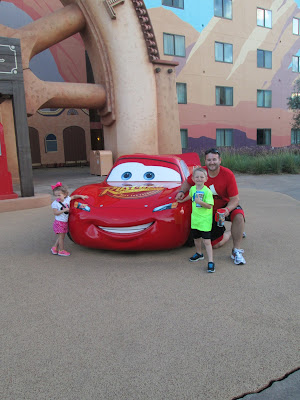 After swimming we grabbed dinner in the food court.  I had a burger, Eric had orange chicken, and the kids had pizza.  All in all it wasn't a bad meal. 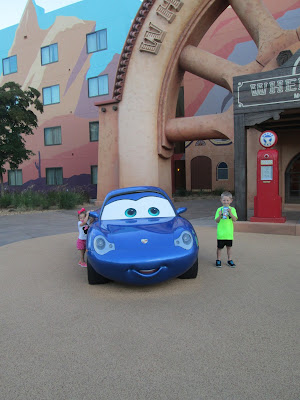 We spent a few minutes after dinner exploring our resort and letting the kids play on the playground connected to our little area. 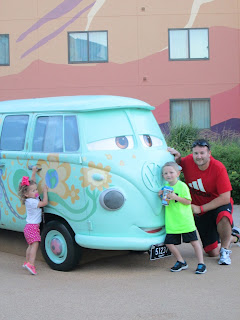 Then we loaded them in strollers and walked across the bridge to the Art of Animation.  Ya'll the theming there was impeccable.  I'm not sure it would be the resort for us given the room location from the transportation area, but the pools and play areas were worth the walk over. 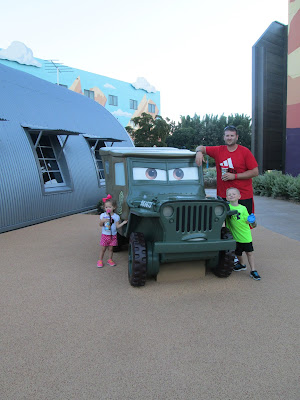 Eli loved the movie "Cars" when he was younger.  In fact, it was the theme of his second birthday.  I was disappointed when we first showed him the Radiator Springs area because he acted too cool for his old favorite. 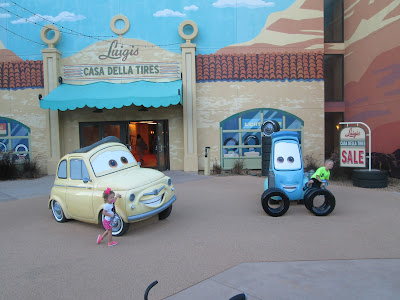 As we were walking away from the first car, he had a change of heart and wanted his picture taken beside every single character. It sure did warn my heart to take a little trip down memory lane! 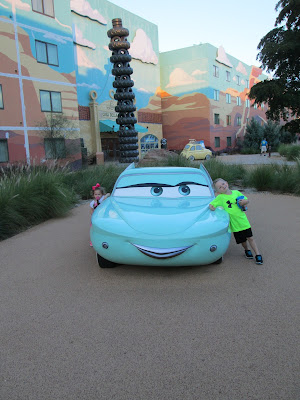 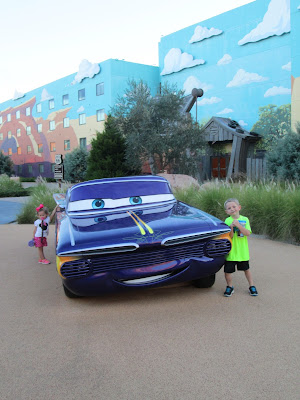 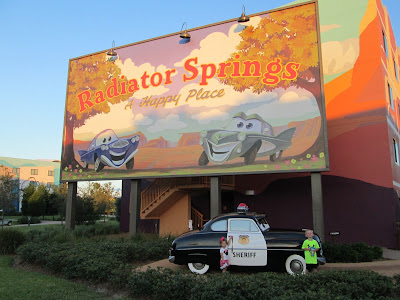 After leaving the Cars area, we headed to the main pool, which is themed as Nemo.  We let the kids run around for a few minutes on the playground, and then we set off to explore the Lion King area. 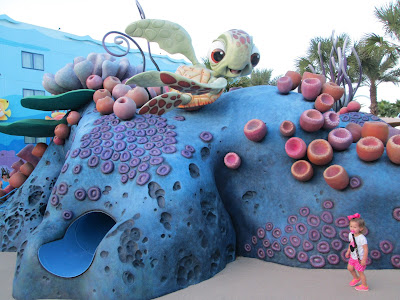 It's more of a walk-thru courtyard, but the giant figurines are so impressive.  I think the kids enjoyed strolling through the area and seeing some of their Disney favorites. 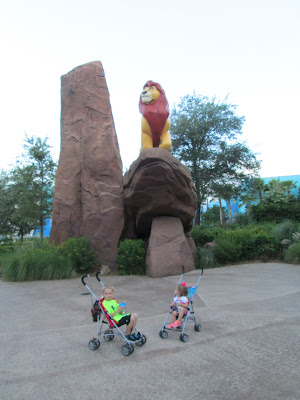 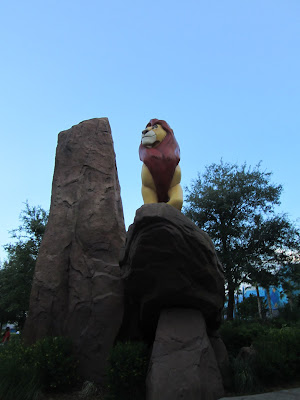 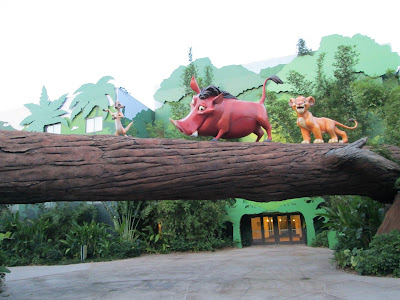 Up next was the Little Mermaid portion of the resort.  These are they only non-suite rooms on the property, and they are the farthest away from food and transportation.  In my opinion, that makes them less appealing than the Pop Century Resort where transportation is easy to access.  Of course, you can't deny the whimsy of AOA. 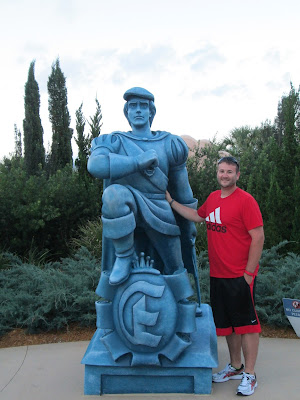 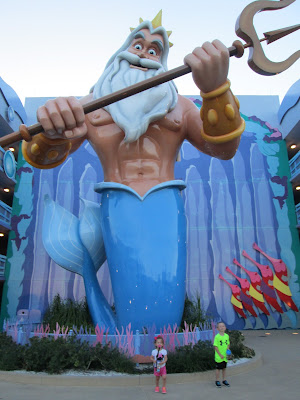 With the kids at the bottom, I think this gives you an idea of how big the figurines are...impressive, ya'll! 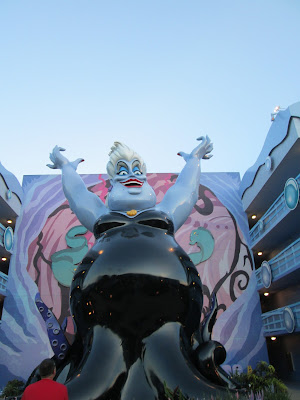 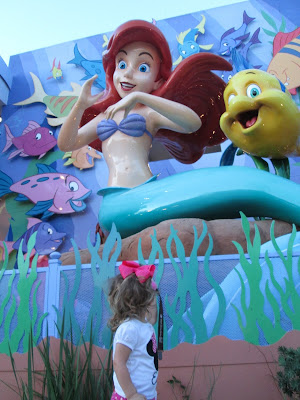 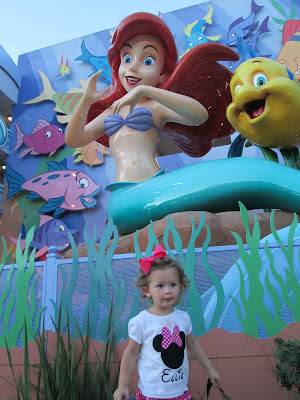 Somebody was excited to see Ariel!  Bless her little heart. 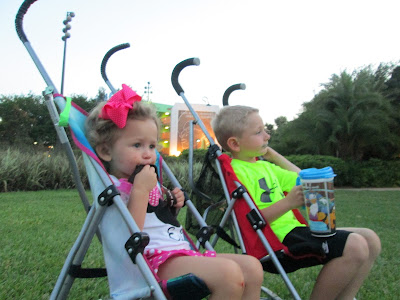 After our tour of the Art of Animation Resort, we headed back to our home away from home, Pop Century.  We were just in time for the nightly outdoor movie, Toy Story.  The kids didn't last too long, and I was okay with that because we had to get some rest for Magic Kingdom. 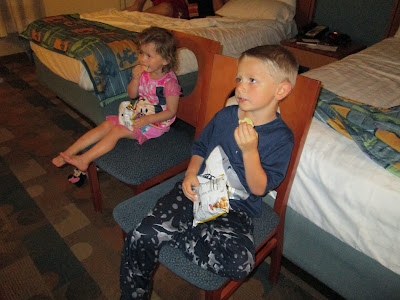 After baths and a quick snack, it was time for lights out so that we could get ready for our first day in the parks!