If you've lurked around this blog for very long, you are probably familiar with the fact that virtually every picture of Ellie has a pacifier in it.  She calls it her "nonny," and she has no intention of giving it up.  Honestly, we haven't been too motivated either. After breaking her TWICE only to have it given back to her, we just weren't too concerned...until this week.  This week she tried to sneak into daycare two times!! 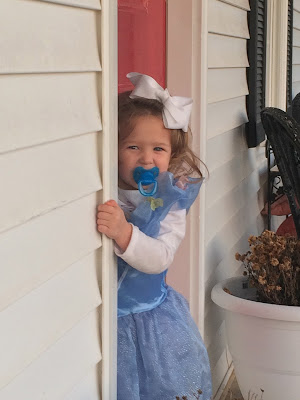 On the way home from work that same day, I decided that it was time to take it away.  After picking Ellie up from daycare, I told her as much.  Naturally, she cried her eyes out.  In an effort to sooth her, I told her that we had to lock them up in a magic box with a key that would only work at bedtime.

To my surprise, she accepted this and started asking for a key.  I happened to have a random key in my console that I have no clue what it goes to, so I dug it out and handed it to her.  Back at home, I put it on a keyring that says, "I Love Eric."  Don't ask!!

I found a nice mirrored box in my closet, and the rest is history.  It was that easy!!  She still gets the "nonny" at bedtime, but other than that, we are pacifier free!