Yesterday, Eli had to have a very minor surgery. Since we don't have a pediatric urologist here in Bowling Green, we had to have the procedure done at Vanderbilt Children's Hospital in Nashville. 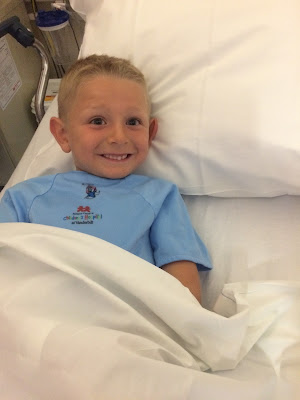 We met Eric's parents last night to drop Ellie off so that she wouldn't have to wait with us throughout the procedure.  We had an early wake-up call of 4:00 am to get prepped and ready. 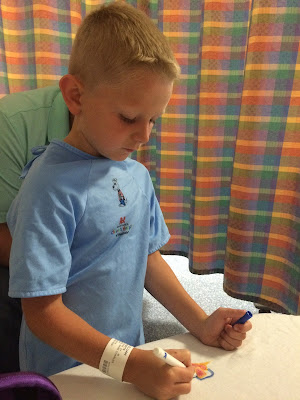 Vandy is simply amazing, ya'll.  Everything is geared toward children.  They even allow the kiddos to draw on the sheets while they wait to be taken back. 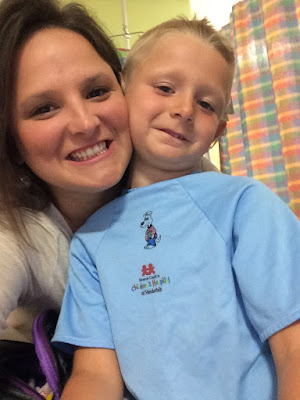 A nurse, child life specialist, and several members of his care team came to see him and talk with him before he went back.  They were so kind and spoke in terms that he could understand.  He later told us that one of them held him in her lap while he "made the mountains."  That's what they told him he was doing when he breathed in the gas because he could see the peeks on the monitor. 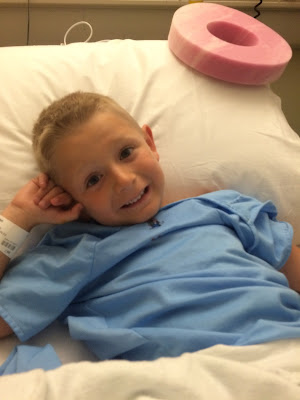 He's nobody's dummy though.  When it was time to take him back, they tried to distract him with a video game, and he quickly told them that he wanted nothing to do with it.  Haha!  Back in the waiting room, Eric and I grabbed a snack and entertained ourselves while we waited.  I'm so grateful to have him by my side.  He's such a rock, and we are a great team! 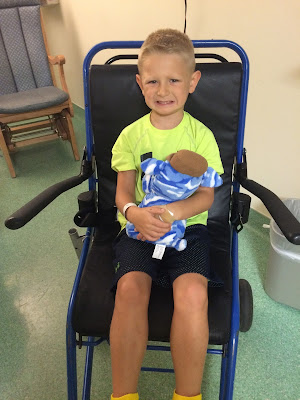 We were allowed back in recovery soon after Eli was awake, and to our surprise, he was quite alert and talkative.  Because we were crossing state lines, we had to wait in a holding room until our prescription was ready.  This gave Eric time to get the car ready while I dressed Eli.  Then it was back to Bowling Green for naps. 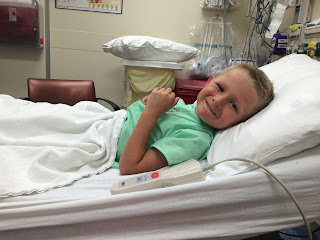 They warned us that Eli would be sleepy all day.  Not so much. Haha!  He stayed awake the whole trip home and then laid in bed next to me and watched a movie.  I dozed for about 20 minutes until he woke me up to go to the bathroom.  When I was getting him back into the bed I noticed what appeared to be a busted stitch.

After some calls back and forth to the doctor's office, we were asked to drive back to Nashville and check into the emergency room to see the on-call doctor.  After a quick exam and some monitoring, they thought it best NOT to proceed due to the risk of possibly needing another surgery.  Instead they kept us for another hour and released us home. 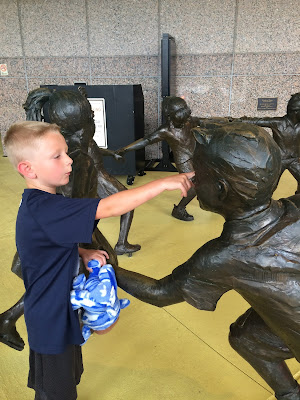 Remember when I said that the meds didn't make Eli sleepy?  Yeah, about that...they make is off the wall hyper.  As we were leaving the hospital, he started talking to the statue while we waited for the car.  Hahaha!  He kept saying, "I know this one moved.  I just know he did."

By this time, we were on the back end of Nashville traffic, so we ran to Target before getting jammed on the interstate.  This gave Eli the chance to pick out a toy for his whole ordeal.  He was such a trooper!

We are so grateful for the professionals at Vanderbilt Children's Hospital.  Of course none of it would have been possible without the glorious protection and provision of the Great Physician!