Do you remember back in the summer when I booked a trip to Disney World on nothing more than a whim.  At the time, I wondered if it was a wise decision and several times since then, I have questioned my judgement because I'm typically not a frivolous spender.  Anyway, my spontaneity paid off and we just got back from the most magical week at the happiest place on earth.

I didn't write much about the planning process because I clearly have failed at blogging this year.  To make up for it, I will include little tidbits throughout these recap posts.  As always, I am NOT a "how to" blogger, nor am I a Disney expert.  I just love going and making memories with my family, so feel free to take it all with a grain of salt. 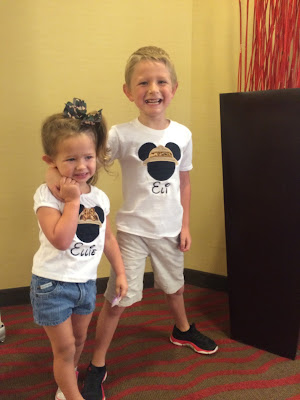 We were supposed to leave early Saturday morning for Orlando, but Eric called me at lunch and asked if I wanted to get a jump start by leaving after work.  I was honestly a little skeptical because I hadn't packed nor had I made a list off what we needed.  Nonetheless, the idea of getting there sooner rather than later was appealing.

After picking up the kids from school, I started cramming stuff into suitcases while Eric booked us a hotel for the night in Atlanta.  We grabbed dinner on our way out of town and hit the road!  We ended up LOVING this arrangement because the kids fell asleep halfway to Atlanta, which meant a quiet ride.   There was very little traffic, and we carried the kids to the room when we got there, slept in, and had a much shorter trek on Saturday. 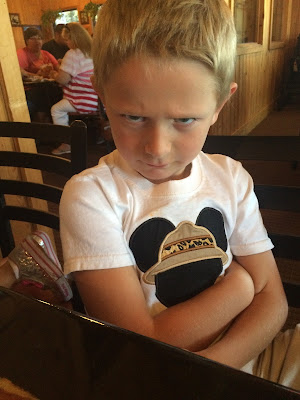 Since we weren't going to Animal Kingdom, I decided to let the kids wear their shirts from last year.  Eli wasn't thrilled about modeling it for me. Ha! On the way, we listened to downloaded music, watched movies, played with the tablets, played car games, and I had a bag full of goodies.  Each hour they were given something new to play with, which kept them well behaved and well entertained. 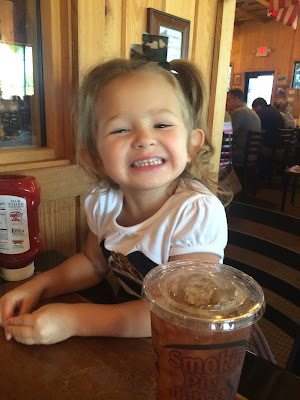 If you've ever read about one of our vacations before, you know that we make a tradition of stopping in Georgia to eat at Smokin' Pig.  They have two locations, one in Macon and one is Valdosta.  We happen to hit the latter of the two around lunchtime, so we took full advantage by stopping for BBQ. 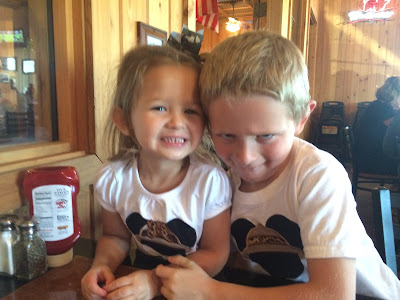 After filling up our tummies, we hit the road for what is always the longest stretch.  Valdosta to Orlando seems to take forever.  I know it's because we are all so excited and ready to be there.  The anticipation is just always so high! 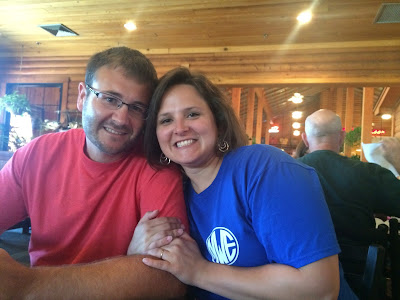 If you do an early check-in online, Disney will text you the room number so that you can skip the long lines at the front desk.  We still had not received our text when we were within 30 minutes of arriving, so while I drove, Eric called to find out where we would be staying.  Naturally, while he was on hold, the text came through.

Thankfully, he was off in enough time to enjoy the grand entrance onto Walt Disney World Property because the kids went crazy.  There is really no better feeling than seeing the "Welcome Sign." 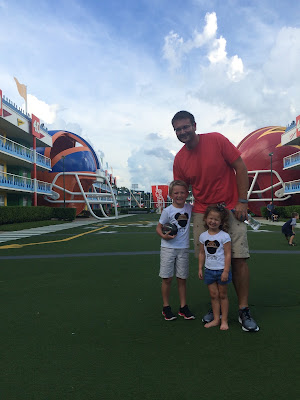 After finding our room and unloading, we did what Eli had been dreaming of...hit the football field. He and Eric passed ball while Ellie and I walked around to do a little exploring.  The resort is much smaller than Pop Century, so we able to get around fairly quickly.  To increase excitement, I had shown the kids lots of videos of the resort.  Ellie was thrilled to recognize Donald Duck and begged to have her picture taken. 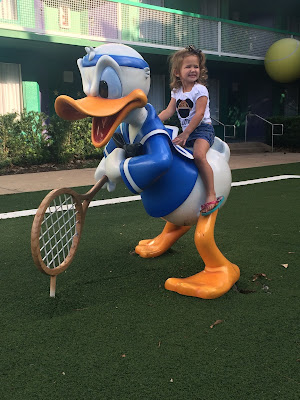 We hadn't anticipated arriving so early because we didn't know that we would drive to Atlanta the night before, so we didn't have any plans for evening.  Neither of us are HUGE fans of Disney Springs, so we decided to avoid to crowds and stick around the hotel for the night. 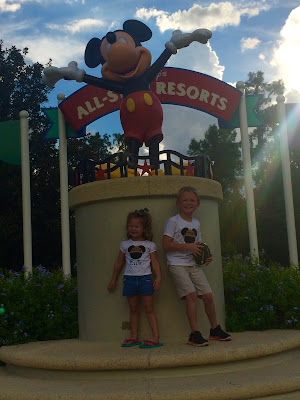 The plan was to unpack, eat a pizza in the room, and hit up the pools and night-time movie. Here's a tip, if you aren't using a Dining Plan, make sure to do pizza for dinner because the food courts have an awesome deal...$14 for a large.  They even throw in the plates and napkins so that you can eat in your room, which is exactly what we did because we had drinks, chips, and snacks to make it a meal. 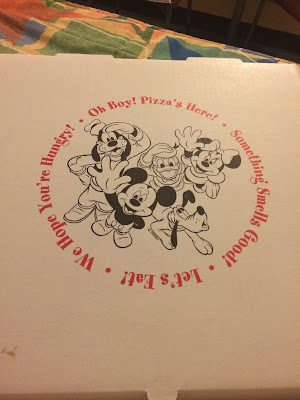 No sooner had we eaten and gotten dressed for the pool did a HUGE storm pop up.  It rained all night long.  The kids were devastated that they couldn't swim, and they about drove us nuts at bedtime.  I mean it was horrible.  Tempers flared from everyone, and it was just kinda a bad couple of hours.  Luckily, a good night's rest helped us get ready for our first day in the parks.