Because we were doing Disney on a whim, we decided to stick to a strict budget.  This meant that we opted not to spend the extra money on Park Hopper passes.  This really wasn't a huge sacrifice for us because we have never done them in the past.  Our kids are still young enough that visiting one park a day is more than enough. 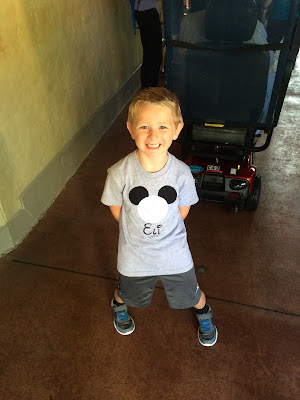 With all of that being said, our first day in the park was spent at Hollywood Studios.  We typically start and end with Magic Kingdom, but we really wanted to get a full day in since we couldn't park hop. Magic Kingdom was hosting Mickey's Not So Scary Halloween Party that night particular night, which is a special-ticket event.  Again, we were on a budget and didn't purchase a ticket, which meant that we would have been forced to leave the park at 3:00...not the best way to spend our day. Hollywood Studios, on the other hand, had Extra-Magic hours so we decided to start there. 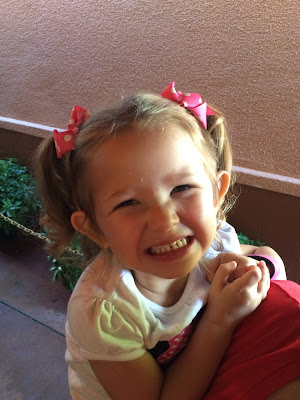 When booking Fast Passes at Hollywood Studios, you have to choose your options from "tiers." This more or less prevents visitors from getting Fast Passes to the major ride/attractions all in one swoop.  The kids love the Great Movie Ride, which is a Tier 1. Toy Story Mania also happens to be a Tier 1 attraction, so we were in a bit of a pickle when choosing between the two.  Ultimately, we went with a Fast Pass for Toy Story Mania because it's much easier to secure a floating Fast Pass for the Great Movie Ride later in the day. 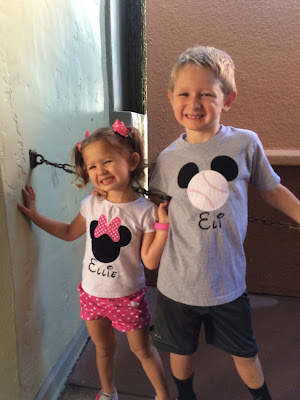 With that in mind, we headed straight to the Great Movie Ride as soon as we got there.  The kids were thrilled, and the wait wasn't too horrible because the movie memorabilia and narrated video kept us all entertained.

I don't really remember exactly how our day went, so I'll hit the highlights.  After we got off the Great Movie Ride, we headed to the Muppet Invasion.  While I like the other 3-D experiences at Disney, this is not one of my favorites.  It is however, air-conditioned, and the kids love it.  So we headed that way. 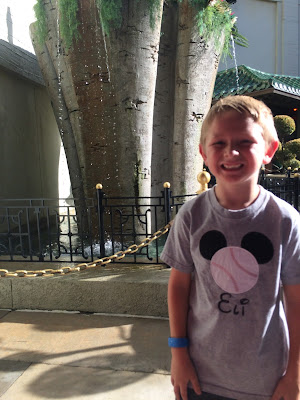 It was hot for October and despite what the crowd calendars had predicted, it was really busy.  In fact, Fall Break proved to be more crowded than our previous visits in early June.  We did a lot of walking and "hurry up and waiting" at Hollywood Studios this trip.  We literally opened and closed the park, and I still felt  like didn't get a ton of stuff into the day. 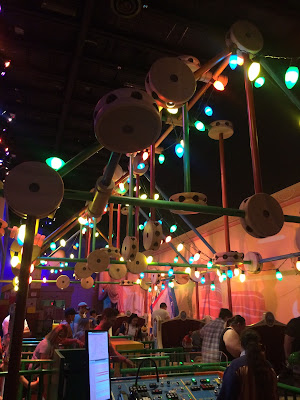 I've said this before, and I'll say it again.  The best advice I can give for booking Fast Passes is to start them 2-3 hours after the park opens when the crowds start to increase, and use them back to back.  As soon as you use your third Fast Pass, use the phone app to start booking the floating Fast Pass.  Use that one, and then repeat.  One cast member told us that a family had used more than 20 Fast Passes all in one day. 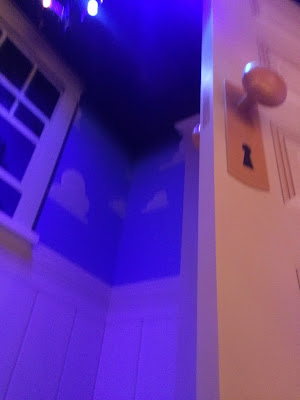 We had Toy Story Mania scheduled fairly early, so we headed there after the Muppet Invasion.  The detailing on this ride is amazing.  It's set up like Andy's room, and you (the guest) are supposed to be toy size.  Everything looks huge, like it would from a toy's perspective. 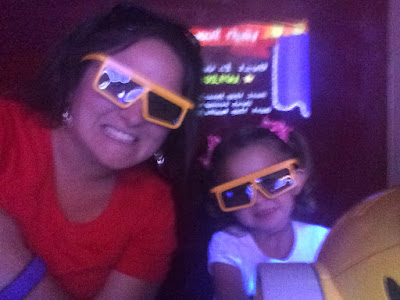 They have two que lines now, so it really helped speed up the processes. Ellie and I rode together, and she had the best time "shooting" her targets.  We were actually lucky enough to get another Fast Pass later in the day, so we were able to experience this popular attraction TWICE. After Toy Story Mania, we ate lunch on Sunset Blvd.  I had a Fried Green Tomato Sandwich, and it was beyond amazing.  The only drawback of this location was that it was outside, which didn't make for a comfortable, climate controlled environment.

After lunch we hit up Frozen Ever After in it's new location.  We had Fast Passes for this, but again, it was a lot of waiting around for the show to start.  Nonetheless, it was as spectacular as we remembered.

Our third and final Fast Pass was for the Indiana Jones Stunt Show.  We had amazing seats and really enjoyed the action.  The only downfall was that due to technical difficulty, we were unable to see the Legend of the Temple stunt.  Hopefully that will be in our future. 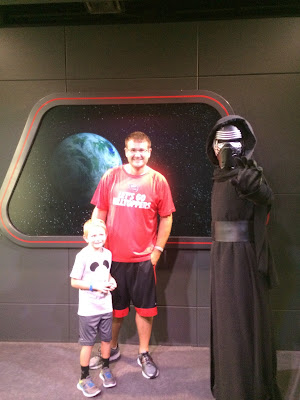 We hit up the Little Mermaid Show next, and Ellie was thrilled to see her favorite princess and sing along to her favorite songs, even if it wasn't  that kind of show.   While we were in the area, we went to Star Wars Launch Bay to meet some of the characters.  After a brief encounter with Kylo Ren, we used our Fast Pass for Toy Story Mania before returning to finish out the experience. 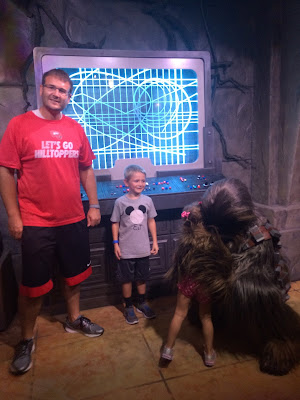 Chewbacca was a super-short wait, and both kids were pumped about getting to meet him.  Ellie has never even seen a Star Wars movie, but I guess seeing Eli so excited, made her want to get in on the action. 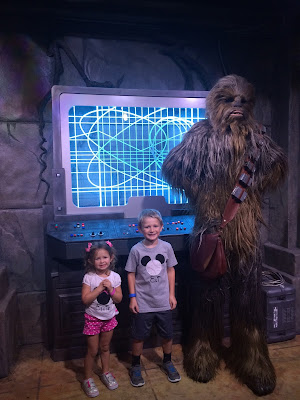 We walked around the area for a bit looking at the movie artifacts and meeting a few more cool characters.  As we were leaving, we happened upon a Star Wars Show, so we stopped to watch for a minute. 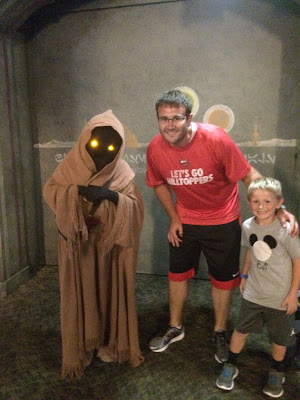 After a quick snack and short break, Eli and Eric decided to do the Star Wars Theater experience, so I took Ellie to the Disney Junior area to meet some of her favorite characters.  This "divide and conquer" approach works well for us.  Separating for short amounts of time no greater than (30 minutes) gives us a chance to really cater to each kiddo. 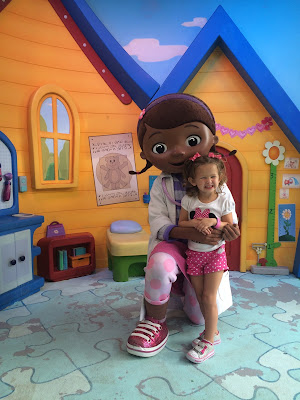 Would you believe that we were lucky enough to score another trip on the Great Movie Ride before we headed to one of the best shows at Disney...Fantasmic!

After a mass exodus from the park with other billion visitors, we headed back to the hotel room where I bathed the kids while Eric ran to the McDonald's right down from our hotel.  After a quick dinner we crashed into bed exhausted from such an amazing day.