It's Been A Decade

Exactly 10 years ago today, I met Eric!  Ya'll know that I love a good story, and since this one has never graced my blog...here we go. 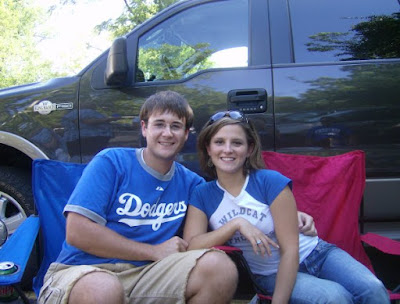 It was a beautiful Thursday evening and the last few days before finals began, so a group of girlfriends and I decided to eat dinner on campus at RedZone.  I'm not sure if that's even still a place, but it once existed.  Anyway, the wait was forever long, so we sat outside on the patio until it was our turn to be seated.  About halfway through dinner, my best friend's (Alex) phone rang, and it was my Mom.  I had apparently forgotten my super nice and expensive pink Razor phone on the bench we had been using.  I know, I know...some things never change!

You may be wondering how my mom knew this.  I had her listed in my contacts as "ICE" for In Case of Emergency. Clever, I know.  The person who found my phone called my mom, who then called my bestie.  I don't remember the specifics of the conversation, but I'm pretty sure that she probably lectured me about my irresponsibility and questioned how I would ever survive as an adult.  Side note: Mom, I'm sorry that I stressed you out all the time.  I'm still quite forgetful, but I promise you that it always works out.

Back to the phone call.  My mom said that a very nice young man would be waiting for me on the patio so that I could claim my Razor.  After hanging up, I relayed this information to my group of friends, one of whom was a hopeless romantic (Katie Ro).  Without missing a beat, she said, "Oh my gosh Morgan, what if that's your future husband? You could be about to meet your future husband."

Spoiler alert...she was wrong.  He was a very nice young man, and I appreciate very much that he did not steal my phone.  But that's all I remember about him.  The funny thing is, I DID meet my future husband that night just a few hours later.

After dinner, I stopped by the newsroom to work on my story for an upcoming show.  When I walked in, there was Eric working on his  weather forecast. We chatted for a bit but nothing too out of the norm.  This probably won't shock you, but BCOM (Broadcast Communication) kids are quite talkative.  Basically, it's a great major if you want to make friends, which is what I assumed was happening.

Following our brief meeting, I headed to the gym for a quick run (yes, I used to do that kind of thing), and then went back to the dorm.  My roommate (Sarah) had not gone to dinner with me, so she knew nothing of my evening.  When I told her about the phone and then meeting Eric in the newsroom she said, "Oh my gosh, Morgan!  I think you just met your future husband."

Clearly, I wasn't the romantic one of the group.  No "ring by spring" for me! In fact, I had no intention of getting married prior to age 30 because, by-golly, I was going to be a reporter and see the world before I settled down.  We can all collectively roll our eyes because not only did I end up being the first one married, I was also the first one to get pregnant.

I told Eric as much about my plans too, but luckily he called my bluff.  Ps - we have dubbed that conversation as the "independent speech."  It's still a topic of discussion in our home if that gives you any idea of how well it all went down...I'll tell you about it one day.  Let's stick with the story at hand.

Eric and I became Facebook friends that night because that's what millennials do.  My finals ended up being on Monday and Tuesday the following week, so I left and headed home for the summer.  The VERY night I made it back to Lexington, I checked Facebook and wouldn't you know that Eric had sent me a message asking me out to ice cream.

Obviously, I couldn't go because we were in two different cities.  We ended up exchanging phone numbers and spent the entire summer talking on the phone and getting to know each other.  We quickly reunited in August.  In fact, the night I moved back to Bowling Green, he stopped by my apartment.  He had been sitting when we met in the newsroom three months prior, so I remember when I opened the door my very first thought being "Oh my gosh, he's so tall!"

That night, we stayed around the apartment catching up, talking, and watching movies.  He was a perfect gentleman and gave me the sweetest forehead kiss when he left that evening....and the rest is history! I fell hard and fast after that.  I will add this final thought...to this day, a forehead kiss is our unspoken language that even when our world is crazy, we are ok.