The Watson Pizza Scandal of 2017

Do you ever have those moments in marriage that you know you’re still going to be talking about in 20 years?  You know what I mean - those little “tiffs” that are so absurd you wonder why you’re even “arguing” about whatever it is in the first place, but you can’t seem to let it go?   If you don’t know what I’m talking about, you are either not married or you’re still a newlywed.  For everyone else, let’s talk about what Eric and I are dubbing as the “Watson Pizza Scandal of 2017.”

It all started on Saturday night when we decided to chill out at home and make some homemade pizza after a day of swimming.  We had five personal pizzas.  Eli’s was cheese, Ellie and I had supreme, and Eric made his a supreme minus onions because he HATES onions.  He also made an extra pizza to keep for lunch on Sunday…such a smart move!

So we were sitting there enjoying our delicious meal and quite proud of ourselves because cooking has become a rarity these days.  About that time, Eric walked into the kitchen to discover that I had “stolen” his extra pizza.  That’s right – I had somehow grabbed the supreme-no onion pizza and devoured the entire thing without ever realizing my error. And it was quite good, I must say.

So here’s the scandal  - was it an innocent mistake or did I intentionally eat his pizza and save mine for lunch on Sunday knowing that he wouldn’t touch it with the onions on it?

I think you know which side of the “argument” we each align ourselves with.

With our two opinions formed, the debate began. The thing is that the whole situation struck me as funny and I started laughing uncontrollably.  That was probably not the best response from someone whose flightiness creates regular stress – for example the time I forgot we had tickets to a concert for a date night and had to ask his parents to drive three hours to watch the kids…the day of the event.  Or the time I drove off with my wallet on the roof of my car and had all my credit cards stolen, or the time I was sitting at the ballpark waiting on Eric and Eli to arrive, when I was supposed to have stopped by house to get them.  Those kinds of things happen weekly in the Watson home, and Eric is such a patient man to put up with this kind of thing—but don’t mess with our food or we’ll take it to a whole new level of crazy!

So, the pizza was gone –devoured- because it was good, I’m laughing hysterically at the situation, and my poor hubby’s hard work was sitting at the bottom of my stomach.  Good times, ya’ll…sorta.

All is well that ends well and about three minutes later we were laughing at the audacity of it, but I have a hunch that it will be a point of contention in the future.  On our 50th Anniversary, we will probably still be talking about the “Watson Pizza Scandal of 2017” and whether or not I intentionally ate the extra pizza.

For the record, I did no such thing!  And to make amends, I sent Eric this text from work today of me eating the pizza. 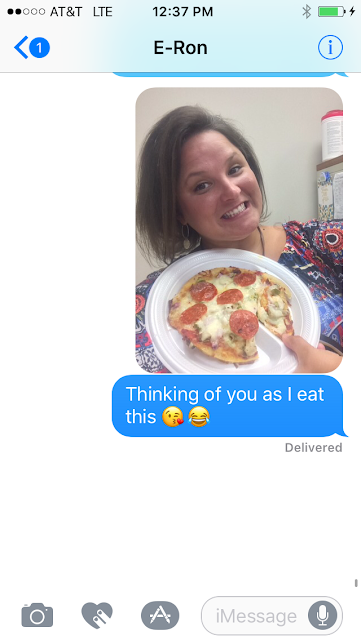 Bless his patient little heart.  He’s such a good sport!