A Discussion About Mental Health 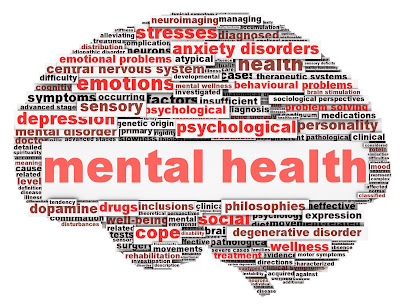 If you've been on any form of social media this week, you have probably noticed that it's emotionally charged with polarizing debates about how to handle the heartbreaking epidemic of violence that is quite literally killing our nation.  While these conversations are imperative to our healing, they are not the issue that weighs most heavily on my heart.

Today I want to talk about mental health because if you haven't already noticed, the only conversations that we have around the issue occur within the context of analyzing a mass murder, and nothing could be further from the true story behind an illness that's simply not talked about.

It's the story of the child who lives in an emotionally and physically unsafe home, yet is brave enough to wake up and make it to school each morning because they know that's where they are seen and loved.

It's the story of the teenager who suffers from anxiety because of the exhaustion of living up to everyone's demands - academically, athletically, and socially. All they really want is for someone to say "you are enough."

It's the story of the young mother with postpartum depression who wants to bond with her baby but finds life with a newborn completely overwhelming and almost debilitating at times.

It's the story of a middle-aged man who bears the weight of providing for his family, training his children, and leading his wife, while also working to achieve a level of success defined by a society that values materialism over relationships.

It's the story of the spouse who must become the sole caregiver to his or her life partner and best friend when the devastating medical diagnosis is handed down - the spouse who is flooded with precious memories of better days while being haunted by their current reality and fears of the life that is to come.

Let me ask you, if you were that child, that teenager, that mother, that husband, or that spouse, would you ever reach out for the support and treatment necessary to help you heal when the only discussions you've ever heard around mental health involve debates about guns and mass murderers?

You wouldn't and that's part of the problem.  Because that teenage gunman was once a kindergartner living in chaos.  What if someone, anyone, had talked about the elephant in the room?  What if someone ignored the stigma associated with mental health by reaching out to that family and saying, "me too."  "I get it.  Let's get help and work through this together."

Eli was two months shy of his second birthday when I finally reached out for help in what would become a diagnosis of postpartum depression.  I knew something wasn't right.  I knew my feelings were unhealthy.  I knew I needed help.  But there is so much shame that comes with the stigma of  mental health, and we are doing ourselves a disservice by not discussing it.

We need to talk about the warning signs, diagnosis process, treatment options and a general lack of access to quality health care.  We need to talk about how this impacts the patient and his or her loved ones.  We need to stop being afraid of words like "suicide" and train ourselves on how to truly care about this issue that impacts so many people. Mental health is so much bigger than a mass murderer.  It's the story of your neighbor, your friend, your coworker.

It's the part of my story I never saw coming.

We don't have to solve all of these problems today, but I encourage you to think before you flippantly post something on social media about mental health.  Because the unintended stigma associated with that comment could deter someone from seeking the treatment they need. Instead, let's offer love, support, and encouragement without judgment.