Sunday was our first full day, and we were more than ready to hit the beach with the kids!  After "sleeping in" and sipping on some coffee, we loaded up all of our gear and headed out for some fun in the sun! 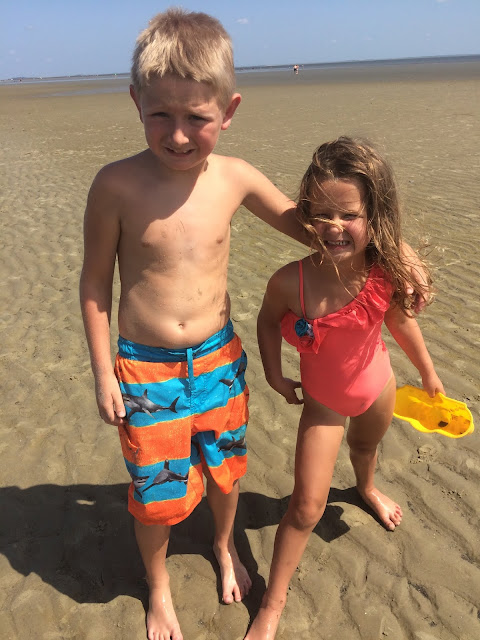 The island had a private beach that was a short golf-cart ride from the house and easily accessible from a board walk.  I'm not gonna lie, that particular beach wasn't my favorite.  It was an inlet so the water was very murky and the sand had a mud-like consistency.  Remember the crab from yesterday?  Yeah, poor Eli got bitten as soon as he stuck his foot in the water. I think it was a hermit crab thankfully, but how random is that?

The best part was that when the tide went out, the beach was almost a quarter-mile long with little shallows of water that were perfect for the babies.  Even though I didn't love the beach for a traditional experience at the ocean, it was gorgeous to look at and perfect for a morning or evening stroll! 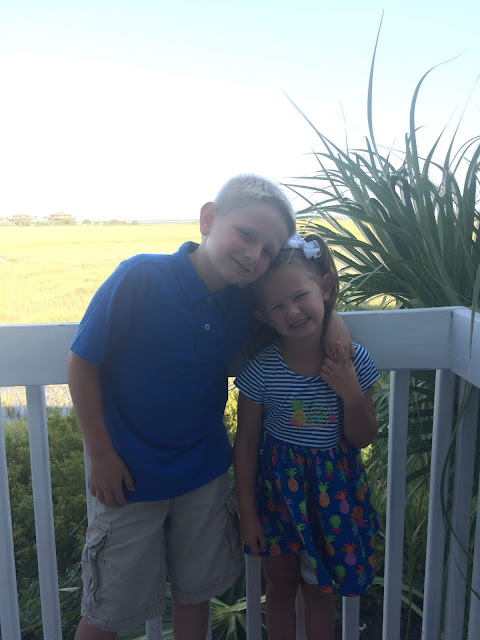 Since we weren't loving the beach, we went to the pool after lunch and spent several good hours playing with the kids and relaxing before dinner.  Each family picked a night to cook so that we could save some money since we all have trips planned for later in the year. And let's be honest, it's difficult wrangling kids while waiting on a table for twelve. Sunday was my brother's night to cook, and we had pork roast, beans, and potato salad. 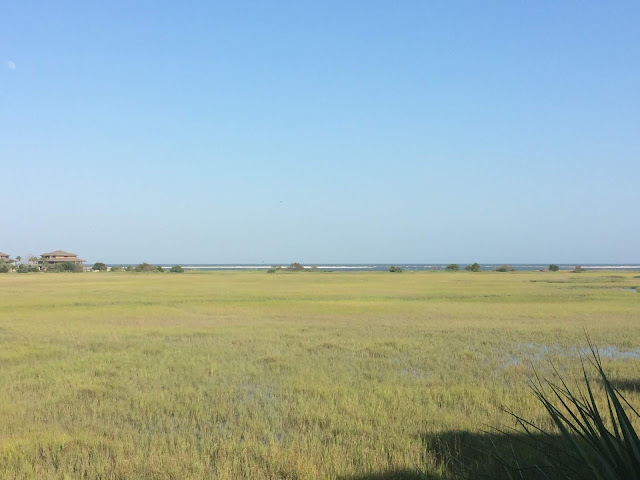 Here's a view off of our back porch!  Ya'll, it was unbelievable and the picture of southern culture.  I was in heaven and could have sat in the rocking chairs staring out at the marsh for hours and hours. 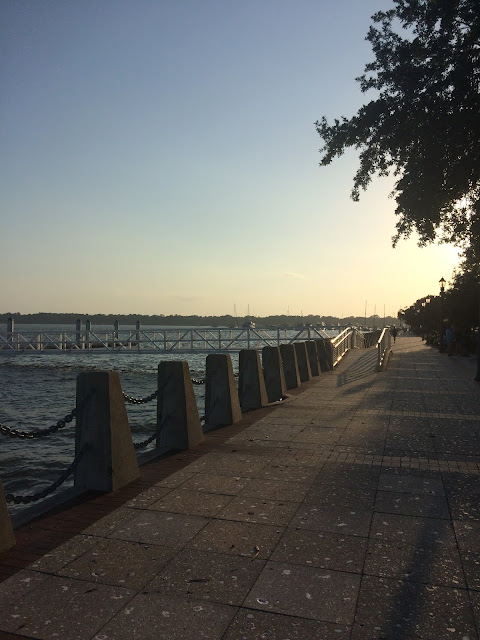 After dinner on the first night, we dressed and headed into Beaufort.  If you read Southern Living you already know that it's been named "America's Best Southern Town" about half a dozen times, so I was almost giddy getting to take it all in.  It's very reminiscent of Charleston if you've ever been, and it has a similar setup along the waterfront. 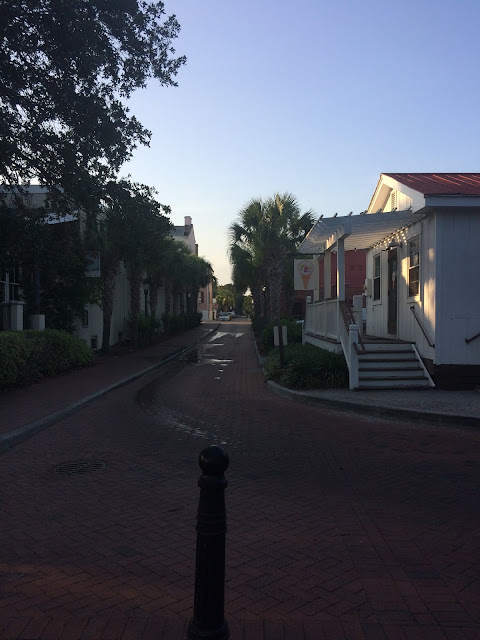 After learning more of its history, it's no surprise that Charleston and Beaufort are so much alike.  They were both flourishing communities along the state's coastline, which made them epicenters for trade, commerce. culture and society. They were in a race to become the most prominent city in South Carolina and were truly neck-in-neck until the Civil War. 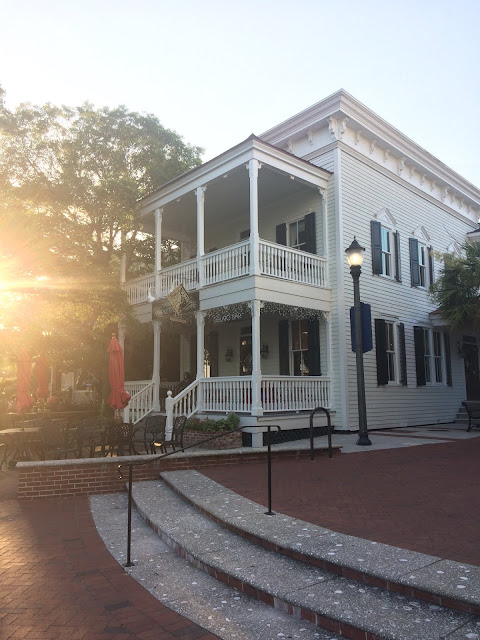 The architecture is amazing and the city has done an amazing job preserving the history and ambience of the town.  Even "trendy" new establishments were tucked away inside the incredible buildings.  The old and new exist side-by-side, which gives the area a unique flare. 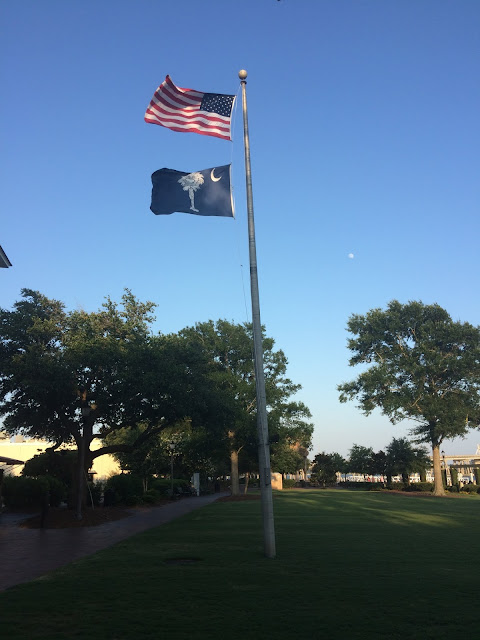 My favorite area was the park on the waterfront.  It had benches for visitors to swing on as they looked out into the water.  There was a playground with a ship and antebellum home, two ice cream parlors, and plenty of space for families to run and explore. 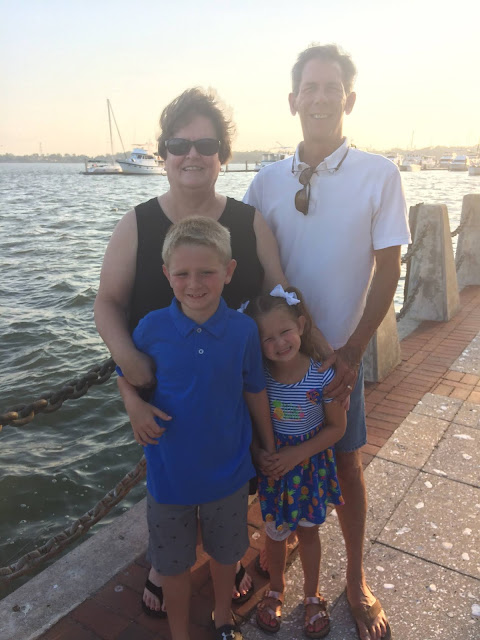 We attempted family photos on the waterfront before walking the historic district, and I'm quite thrilled with how they turned out considering we had so many little people to get looking in the right direction! 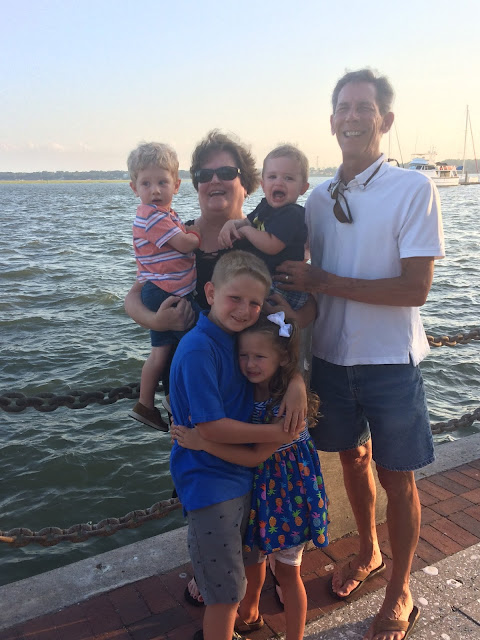 The little photo session took way too long for the kiddos, bless their little hearts!  I have to say that I love that Eli and Ellie are getting more independent.  They wanted to help with the babies and when it was time to walk the streets, they could keep up.  They asked a lot of questions, and I think they truly enjoyed learning about the history of the area. 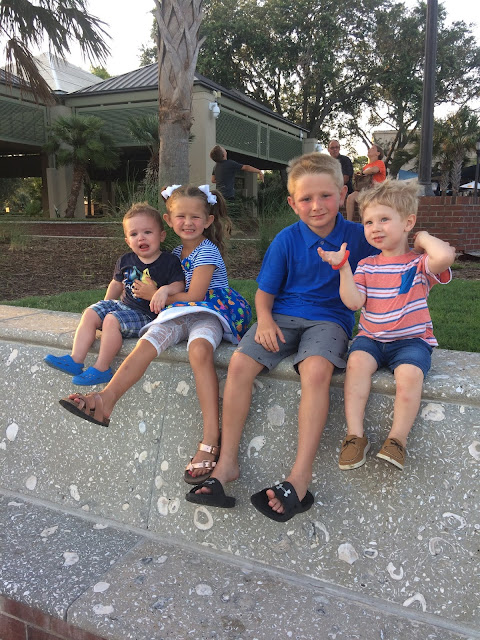 Ellie kept trying to wear the Spanish moss as a scarf, which was a terrible idea because it was full of chiggers.  Thankfully we had sprayed her down with bug repellent, so she didn't get eaten alive.  Meanwhile, my mom asked me to break in a pair of shoes for her...terrible idea!  I had blisters the rest of the week.  We were a hot mess, ya'll! 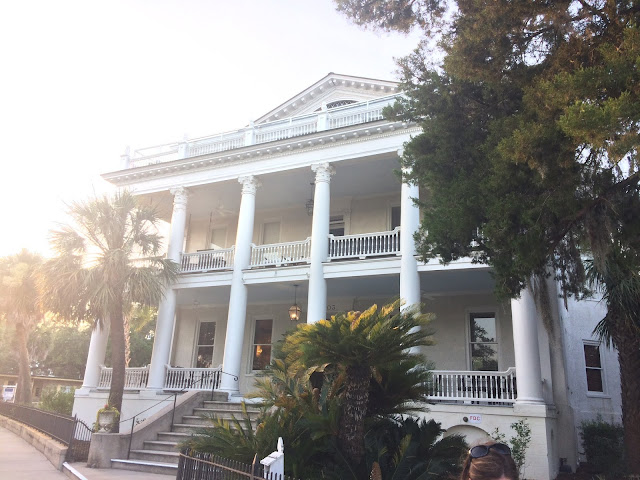 Just look at these houses.  Can you even imagine living like this?  Most of them are businesses or bed and breakfasts now, but I could just day dream for hours about living in that era.  The heat had to have been a nightmare!  Anyway, I'll let the pictures speak for themselves.... 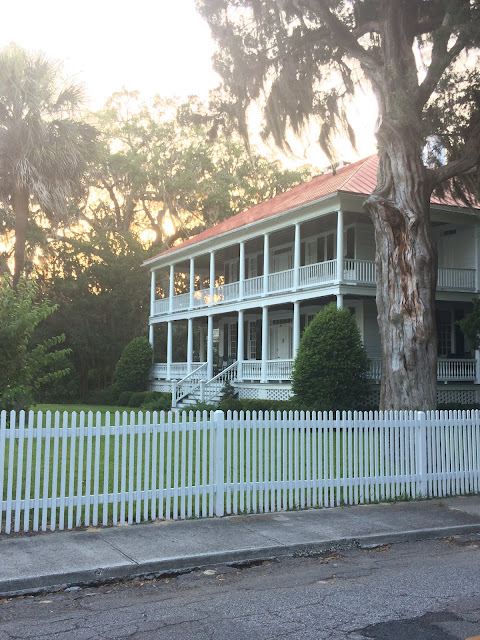 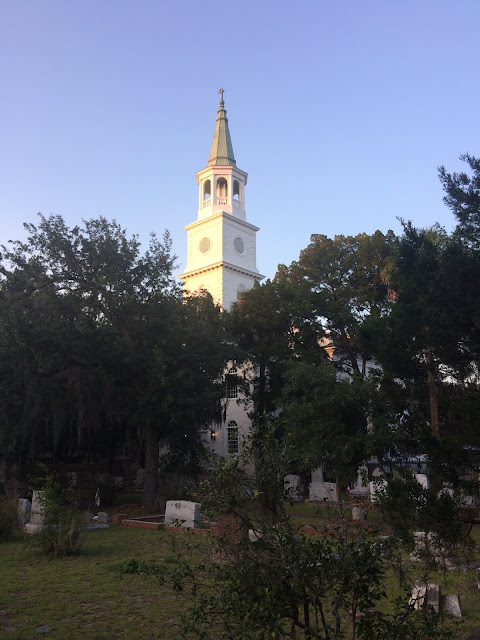 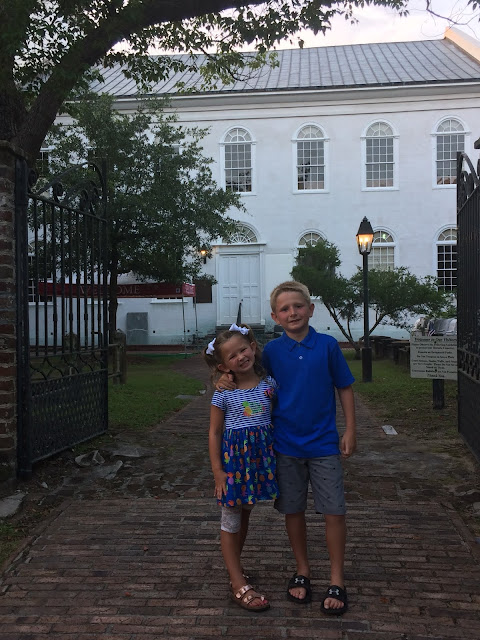 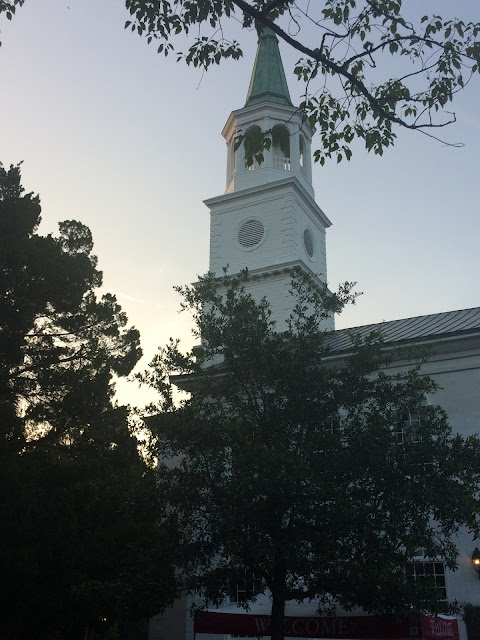 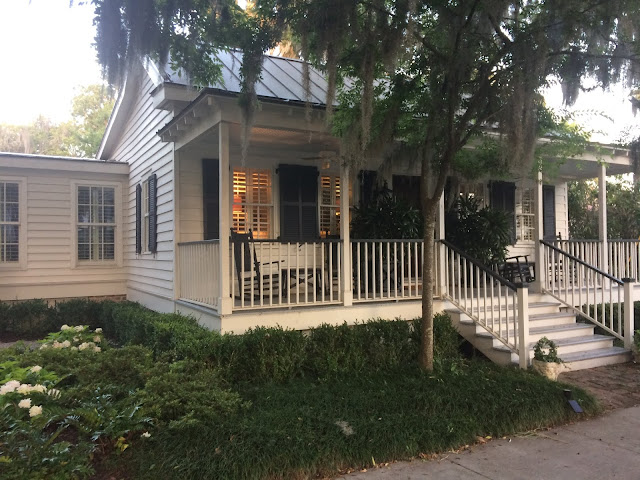 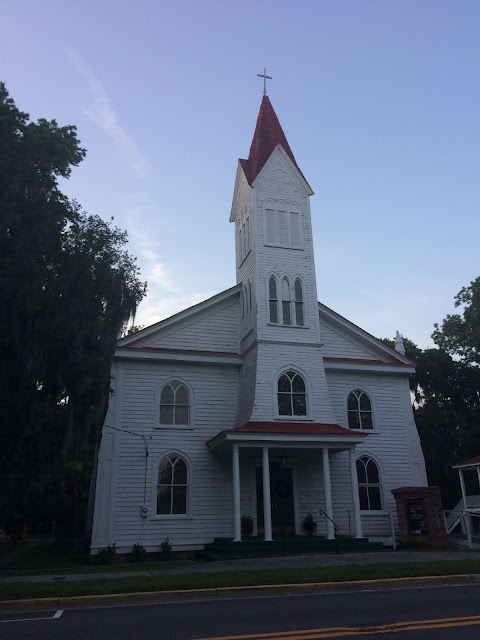 After our little self-guided walking tour, we enjoyed some ice cream and let the kids play before heading back to the house on Harbor Island.  Don't worry, we were back for more later in the week!