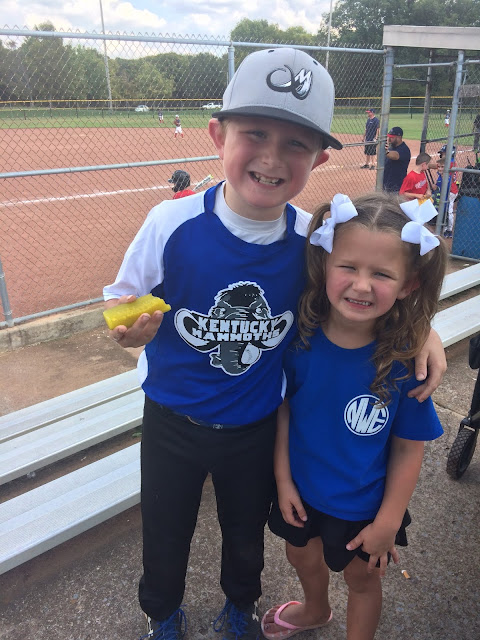 Ya'll, we just got back from one of the most amazing and exciting weekends of baseball!! It was only our second weekend together as a team and the Mammoths walked away runners up in a 14 team tournament!! 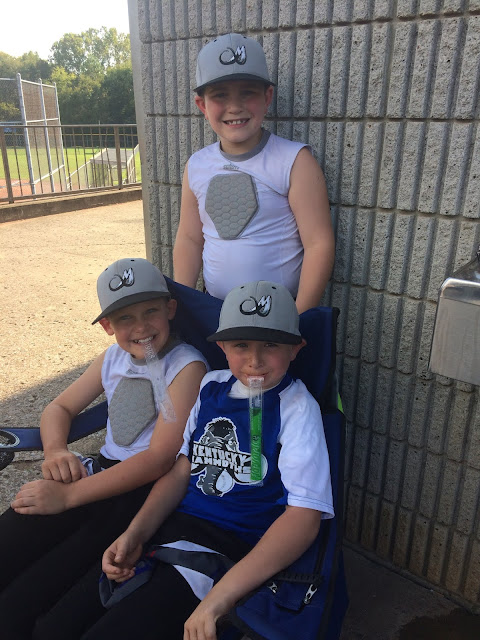 Since it was the last weekend of Fall Break, we decided to splurge a little and get a hotel for Saturday night.  It ended up being a wonderful decision and really made such a nice little getaway for our family. 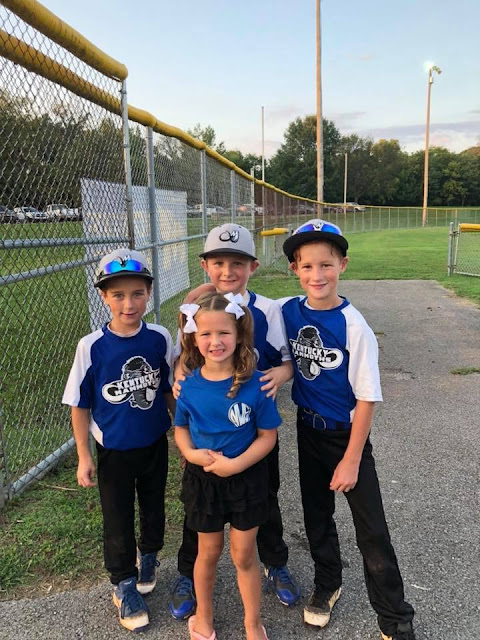 Saturday morning we got up and drove down to middle Tennessee for our pool play games.  It was about 90 degrees, which is just insane for this time of year but that didn't stop us from winning our first game.  Our next game didn't quite go so well, but it turned out that they were one of the best teams in the whole state.  We're firm believers that you get better by playing tough competition, so even though it wasn't a win, the boys walked away with some takeaways. 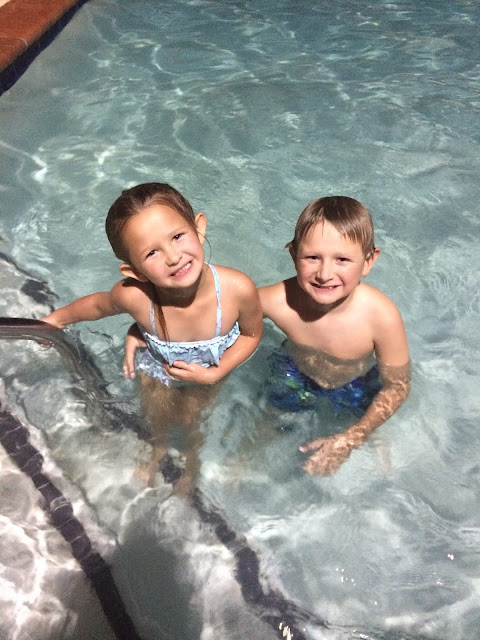 After the second game, we went to the hotel and then grabbed a quick dinner at a place called Slim Chickens.  It was so, so good! Afterwords, we went back to the hotel for the kids to swim, and I took them to the pool while Eric worked on his lineup for Sunday's games.

I ended up texting him to come to the pool because a man walked up from the parking lot and jumped in the pool. He kept talking to my kids asking them their ages, where they lived, where they went to school and stuff like that.  It made me super uncomfortable even though I kept trying to convince myself that it was all in my head.

Maybe he was just being friendly, but as soon as Eric walked into the pool area and sat down, the guy walked away. It still doesn't settle well with me. 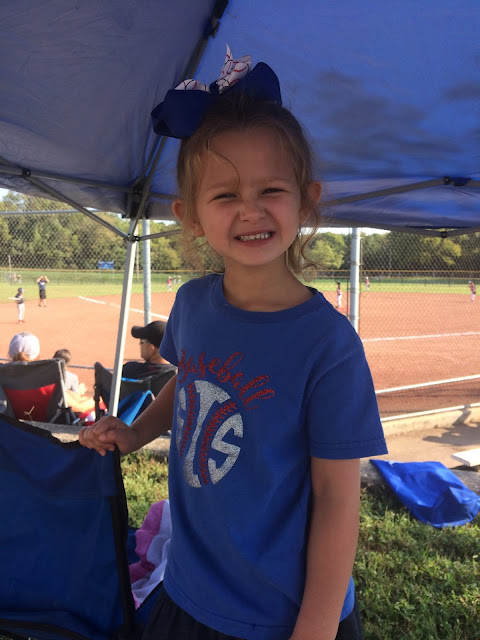 We were up way too early on Sunday to start our THIRTEEN hour day at the ballpark.  It was insanely hot, hopelessly humid, and undoubtedly one of the most fun days I've ever had watching baseball. 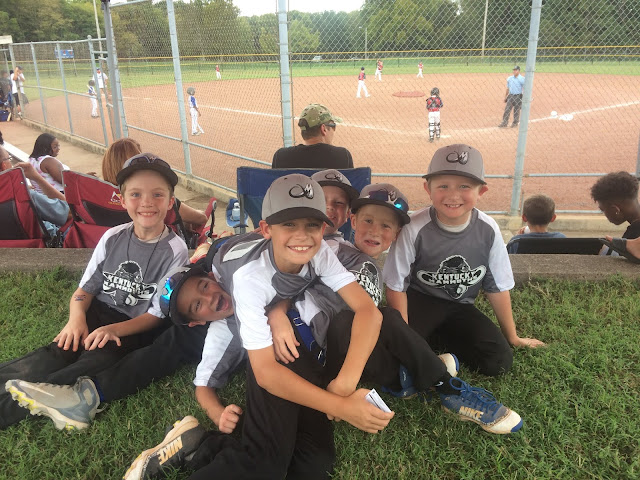 We ended up playing the same team from the first game on Saturday.  We won and then had a long break before the next game.  Trying to keep cool we headed to O'Charleys for lunch and for Eric to work on his strategy for the next game.

Side Note: The first rolls that came out before the meal had a teeny-tiny drop of blood on them.  I thought Eli was just trying to trick me and then it smudge when he touched it.  I basically ran both kids to the bathroom and made them scrub their hands raw.  Not wanting to make a scene, I quietly told the waitress, but the replacement rolls had a dead fly on them.  What in the world?!?  Between the heat and the bread situation, I don't think any of us ate more than two bites. 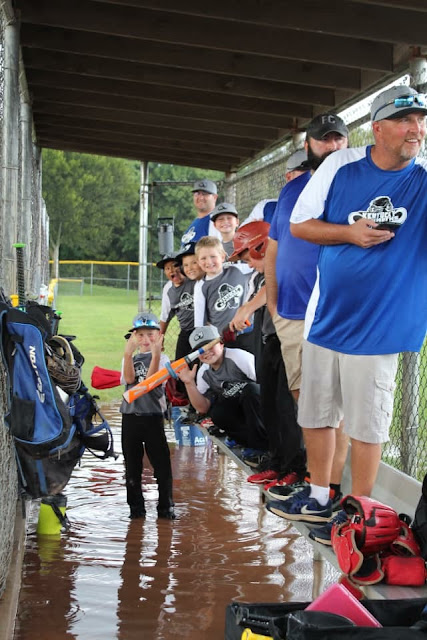 Back at the ballpark, we were waiting to play a tough, tough team when a monster rainstorm popped up and flooded our dugout.  This is one of my favorite pictures of the whole weekend!

The boys were champs and handled the makeshift dugout so well.  Basically, we put a tent over the bleachers and marked off their boundaries with our wagons.

I hate being "that mom;" you know the one I'm talking about...the one who always brags on her kid and things he's going to the MLB... yeah, that one.

Anyway, despite my fear of being "that mom," I just have to say how proud I am of my little blondie.  He caught TWO fly balls in a row that ended the game and sent us to the CHAMPIONSHIP!! 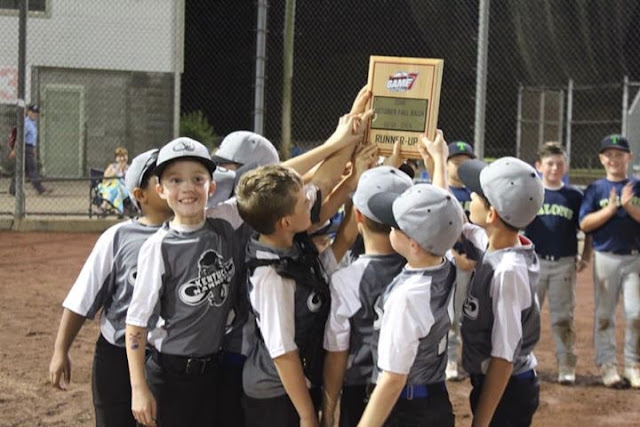 We ended up losing the title by ONE run in the final inning.  It was crazy, and fun and everything baseball should be.  The umps told Eric that this team has a lot of championships in its future, and I can't think of a bigger honor coming out of our second weekend together.

These boys are something special and not because of their athletic abilities.  They have a special spirit about the, a drive.  It's not something a coach can teach, it's something they have inside of them, and I can't wait to watch them develop as players and a team.

It was the very best way to wrap up Fall Break!