Because we live out of town, we end up traveling every single holiday with the exception of Easter and Christmas.  We stay home for Easter and for Christmas we invite everyone to our house, but only Eric's family comes because mine stay in Lexington. To keep things fair, we typically travel as a family on Memorial Day or Labor Day and spend the other one in Lexington with my family.  July 4th is with Eric's parents and extended family on the farm, and we alternate Thanksgiving and New Years.  If we are in Lexington on Thanksgiving, we go to Marion for New Years and visa-versa.  It's a great setup and this year, we were in Marion. 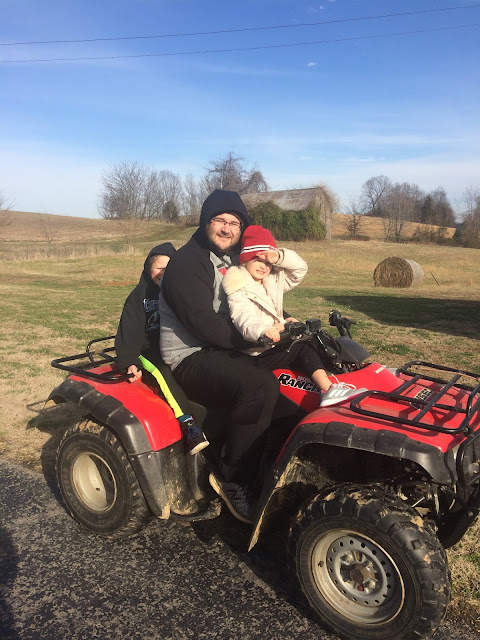 Eric and I both had to work after Christmas, so the kids went home with his parents.  It worked well because we got some work done around the house and a nice little date night. Friday after work, we headed out of town and had the most peaceful ride. Ha!

We slept in on Saturday and had a lazy day before heading to eat Chinese for dinner. 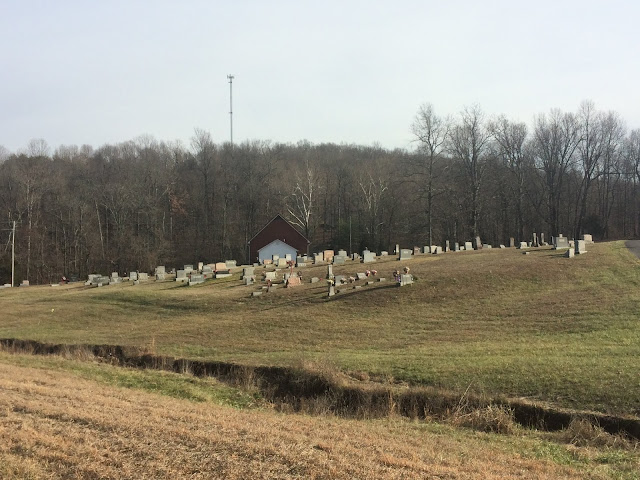 Sunday was beautiful, so we took advantage and got outside.  I walked at the cemetery across from the property while Eric took the kids on a four-wheeler ride.  It seems like an odd place to exercise, but it was nice and peaceful. You know you're in the country when this is your view. 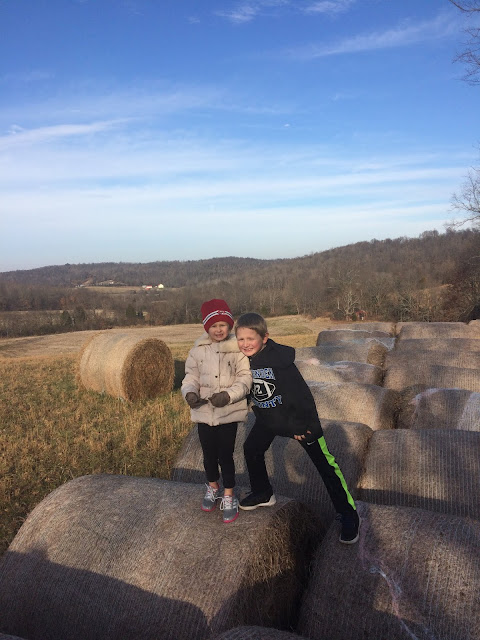 I told Eric to give me about 30 minutes to walk before coming back to get me.  Then we took the kids to jump on the hay.  At first we were just watching them play, but we ended up getting in on the fun by creating little relay races and competitions.  It was such a precious time that I really wasn't expecting.  I know it meant a lot to Eric that our kids were making memories on the land that he grew up loving. 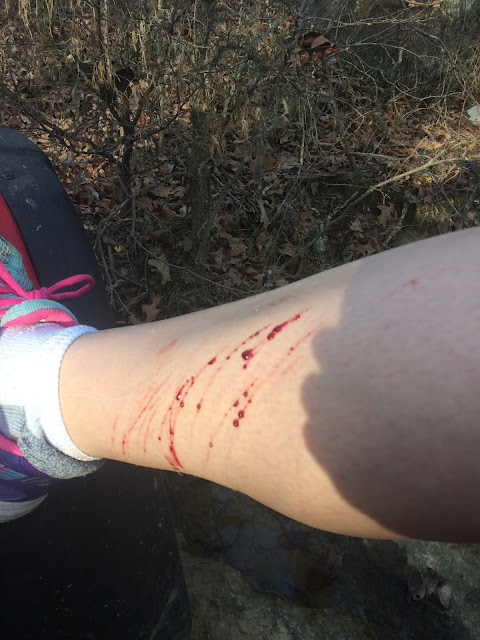 After the hay jumping, we decided to ride to the creek.  Unbeknownst to us, my foot got hung in a vine while were stopped, so when Eric gassed the four-wheeler, leg open got all cut up.  It stung like crazy but was otherwise fine. 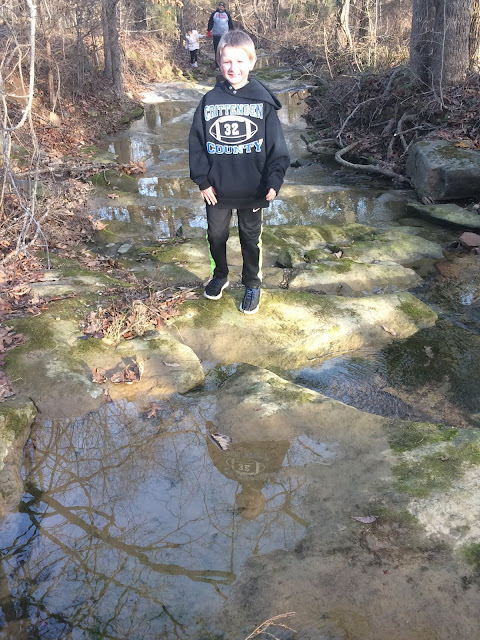 Since it was getting close to sunset and supposed to rain the next day, I didn't want to take away from the creek while Eric took me back to the house to clean it up.  I also did not want to risk getting unclean water in an open wound, so I rested while they explored the creek. 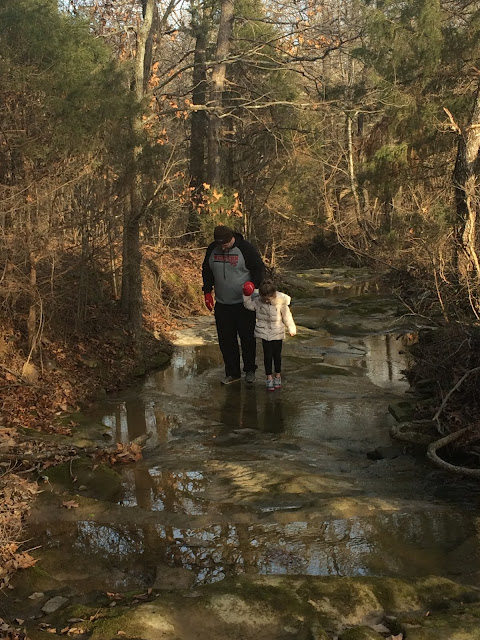 They had such a great time with Daddy, and he loved showing them where he used to play and the rock he painted his name on when he was a little boy.  I'm glad they got to have that time with him. 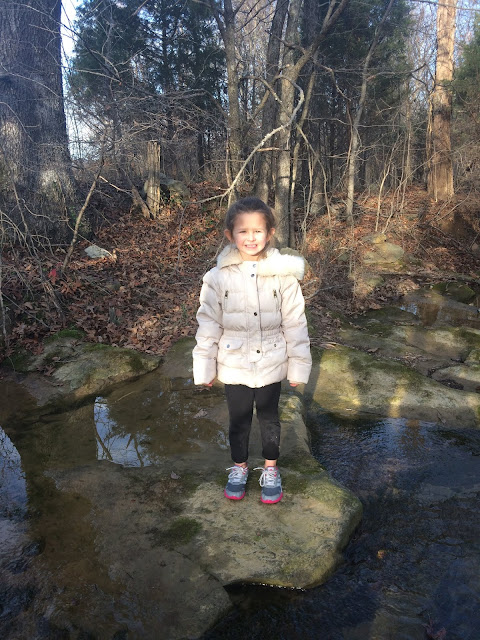 Back the house, I cleaned up my leg and we showered before eating soup for dinner and rounding out the night with a competitive game of Monopoly.  Ellie tuckered out pretty quick, so Eric's mom put her to bed for me so that I could keep playing with Eli.  He's at such a great age for games. 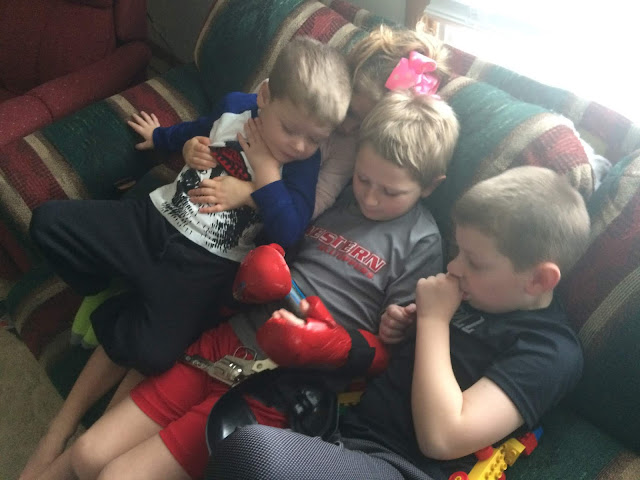 All weekend long the kids had begged to go to the "homeplace," which is the farmhouse still owned by the extended family.  No one lives there, but it's where everyone stays when we get together for special occasions. 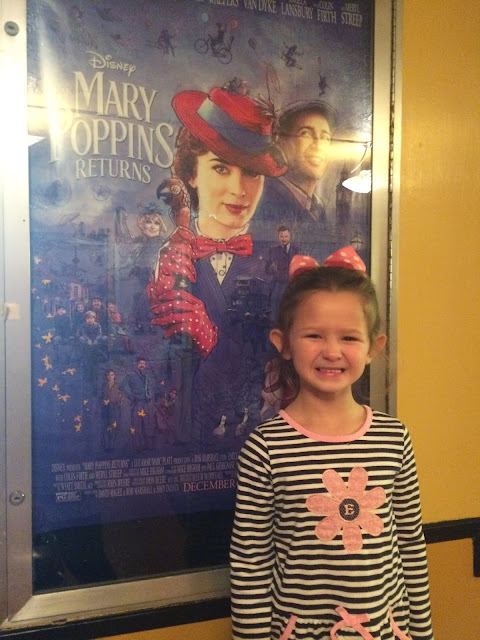 The kids spent a good few hours playing with their cousins before we headed back home for a late lunch.  I was really wanting to see Mary Poppins and wanted to go while were there because it's so much less expensive.  At first we thought I would take Ellie to see that while Eric and Eli went to Bumble Bee.  Eli ended up wanting to stay with Nan and Grandad, so Eric took "the girls" out. 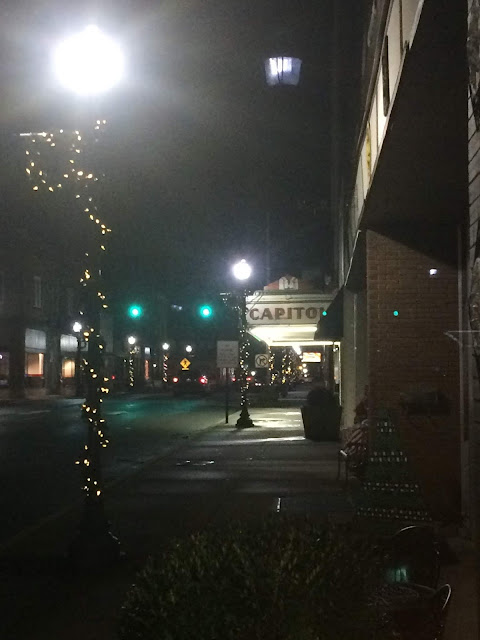 The theater is in Princeton, which is about a 30 minute drive.  It's an old Capitol Theater that has been converted to show movies.  Not only is the atmosphere precious, it's so well priced.  All three of us got in for $15 with an additional $10 spent on a large bucket of popcorn and TWO large drinks.  It really can't be beat. 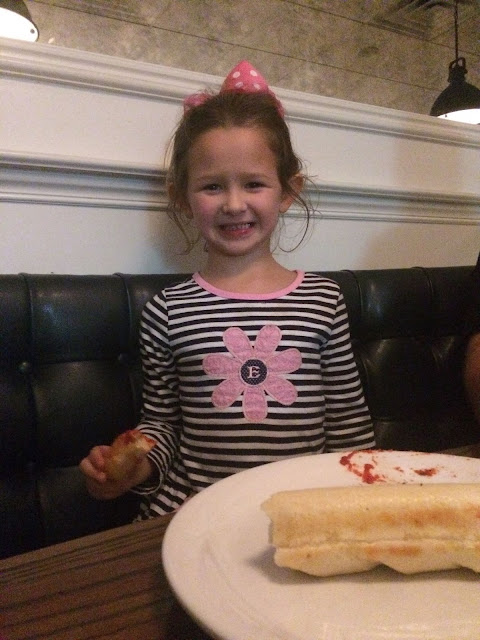 I was afraid Eric wouldn't like the movie and that he was just taking me because he knew how badly I wanted to see it.  Turns out that he enjoyed it just as much as I did and said that he would go again.  We downloaded the soundtrack and have already listened to it a few times as well. 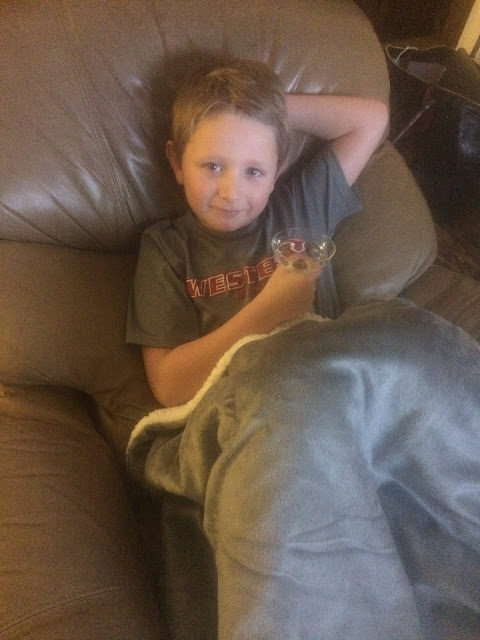 We ended our outing with a pizza dinner, then it was back home to watch the ball drop.  Everyone kind of did their own thing, so when midnight rolled around, Eli was the only one still up to celebrate with me and Eric.  We had sparkling grape juice and went straight to bed.  Ha!

We hated to leave but hit the road on Tuesday after eating our cabbage and black-eyed peas for lunch.  It was such a wonderful weekend and really did so much to recharge our batteries just in time for the new year.