This was our first trip to Disney during Spring Break, but we knew from research that while the weather would be amazing, the crowds would be intense.  It ended up being a great trade-off for us because we have been so many times that we didn't feel rushed to fit everything in or hit up the "classics."  Instead, we enjoyed the amazing weather and slower pace this trip. If we came up on a line longer than 20 minutes (which happened a lot), we just skipped it with without stressing too much. While this worked great for us, I would not recommend the Spring Break window for first timer goers.  There's such a learning curve when it comes to doing Disney, and I think the crowds would be overwhelming. 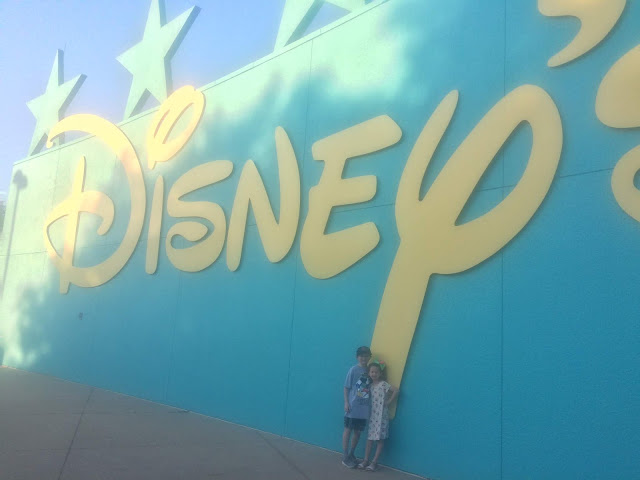 Anyway, all of that to say...because the parks were so busy, we knew that rope-dropping (RD) would be crucial for us.  Normally, we prefer late nights in the parks, but we exchanged them for early mornings this trip and it worked out well with the crowds.  Sunday morning was our first full-day and the only day without my siblings and their families.  We were the only ones who wanted to go to Epcot, so that's why we we went before everyone else in our party arrived. 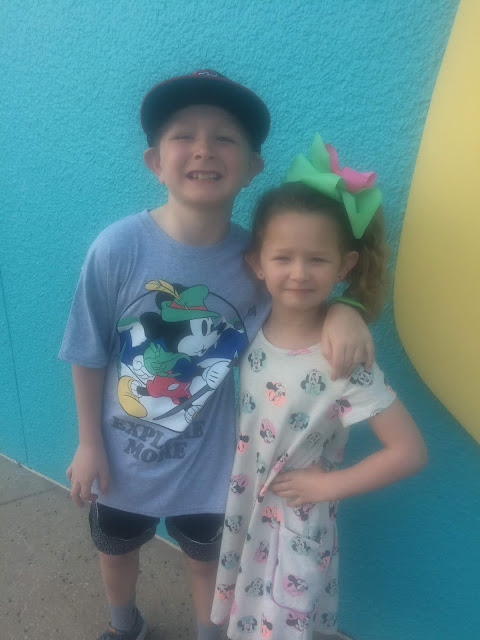 While we were waiting, a cast member asked us if we knew what EPCOT stands for.  Being true Disney Dorks, we were super proud of ourselves when we busted out with Experimental Prototype of Tomorrow.  The employee let us in an a little "cast member secret" and said they say it means "Everyone Comes Out Tired."

Ya'll, that ended up being the cold, hard truth.  Our plan to was make a full day of Epcot with the morning spent enjoying rides and the afternoon spent exploring World Showcase. Illuminations is ending, and our kids have never seen it, so we thought we would catch the show before leaving the park.  That all went out the window about 6:00 when we couldn't possibly walk another step and opted for dinner and  an evening swim back at the hotel, along with an early bedtime.  More on that later, but first, let's recap. 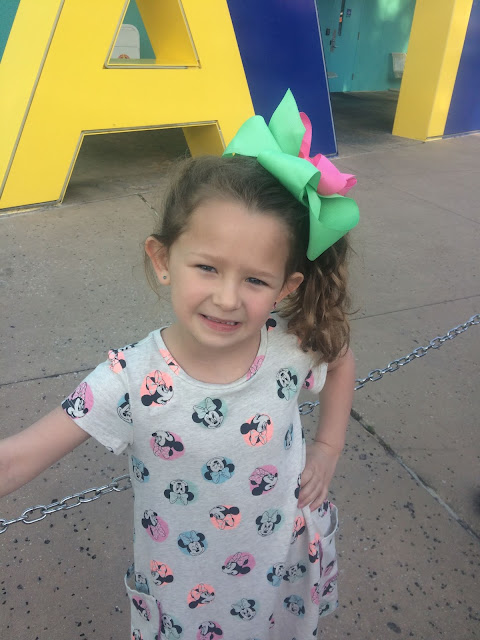 We got to Epcot about 30 minutes before rope-drop and were able to smoothly and successfully navigate the crowds.  As soon as we were able, we were scooting it to Soarin.  Ellie had never experienced it before and Eli hadn't been on it with the new scenes, so they were both thrilled with it.  As an extra bonus, we somehow managed to get a top row, which really enhances the experience in my opinion.

We hopped off Soarin' and headed straight for Living With The Land.  It's by no means thrilling, but it is educational and a nice break from the crowds.

From there, we headed for Nemo and Friends.  Again, we walked straight onto to the ride and then right off of it and into the que for Turtle Talk with Crush.  By this point it was 10:15, an hour past park opening, and we had already experienced FOUR attractions.  This is why you rise early at Disney! 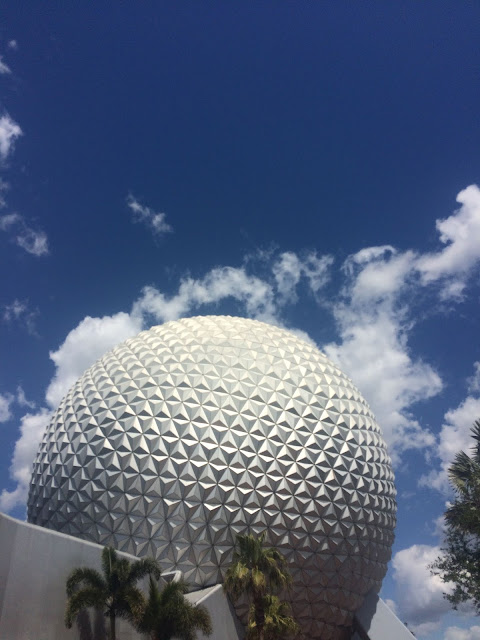 The timing could not have been more perfect because as we wrapped up those attractions, it was time for our first FP on Spaceship Earth.  I'll say it a billion times in these recap posts, but start your Fast Passes (FP) about 1.5-two hours after park open for the best flow and lowest wait times. 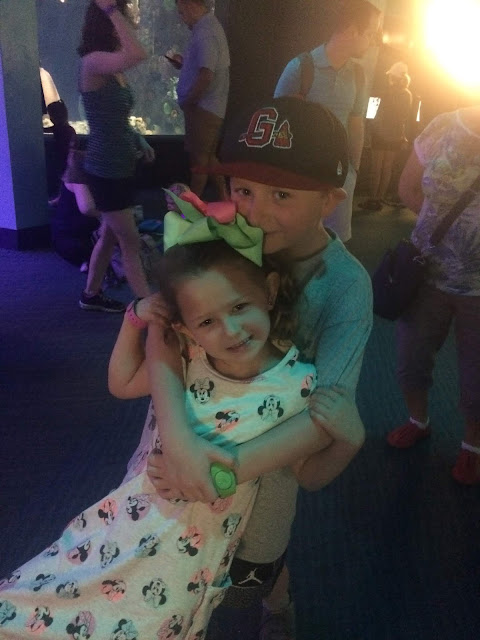 Anyway, we hit up Spaceship Earth, which is one of our favorites. It's not thrilling whatsoever, but you get to go inside the giant "golf ball," and what could be more exciting?  We actually got stuck this year in the ONLY dark part of the ride where you are ascending into the ball.  I'm not sure what caused the stall, but Ellie was freaked out.  Once the ride was back in motion, all was well in her world again. 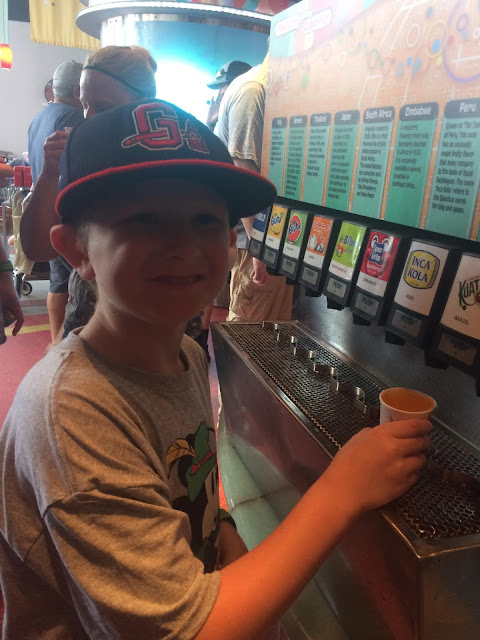 After Spaceship Earth, we had about 40 minutes until our next FP and the kids were starving and so "hangry" so we decided to get a little snack and head to the Flavors of Club Cool.  Now, this is where you get a little Disney "pro" tip.  Okay, okay...I'm not a pro, but would like to share this little nugget of wisdom with you.

A bucket of popcorn at Disney World is $10....insane, right? Well, not really.  Bucket refills are $2 at ANY PARK for the duration of your stay.  That's right, for $2 you can have a family snack in any park.  So, this is about the time we bought our bucket and headed to Club Cool to sample Coke Flavors from all around the World. 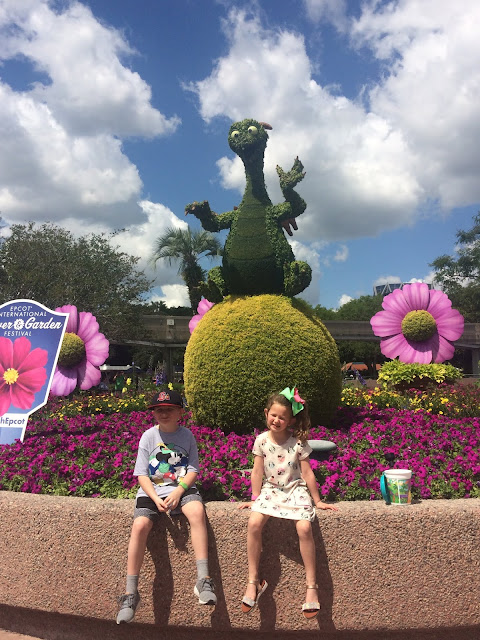 It was the perfect way to kill some time and fill-up our tummies before our next FP at Figment.  In full disclosure, I only got the Figment FP to burn early so that we could start getting a floating FP sooner.  In hindsight, I'm so glad I did because it was a 30 minute wait for a ride that's typically about 10 minutes of waiting.  I don't know if it's because the rumor mill has Figment's days numbered or because inside that Pavillion is where you meet Wreck It Ralph, but whatever the reason, I am so glad we avoided the wait.

Once we finished Figment, we used our FP on Test Track and then headed to World Showcase for lunch.  The crowds were just insane, ya'll.  I mean, they had cast members telling you which line to get into...to get in line for the next line.  It sounds crazy, but it was well run as with all things Disney. 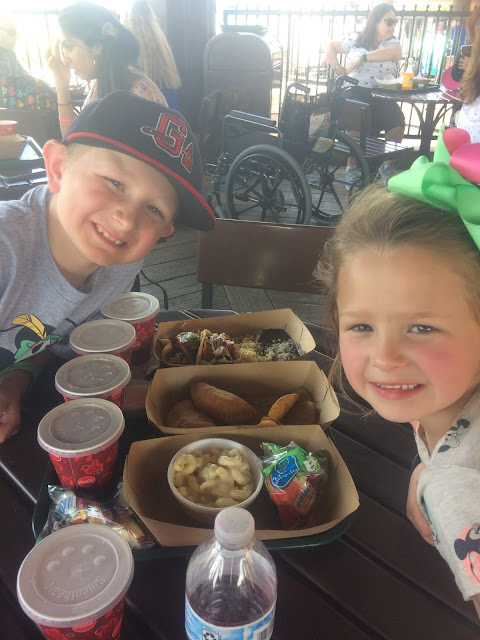 The kids chose to eat at La Cantina San Angel, which is a quick service restaurant inside the Mexico pavilion. It's decent, and of course, I will recap it in the weeks ahead, but I think they repeatedly choose this restaurant because they like to eat overlooking the water.

After lunch we rode the Grand Fiesta Tour inside Mexico, and as always, the kids loved it.  However, it also had a 20 minute wait, which is crazy considering we typically walk right on it.  As we were leaving, we we found Mexican Donald and decided to wait for picture since it's a character experience we've never had before.  While we waited, Eric enjoyed a Mariachi band and later said it was one of his most enjoyable experiences of the week.

This would be about the time my momma heart started breaking because I realized they are outgrowing the character phase of life.  Can someone cue the tears? 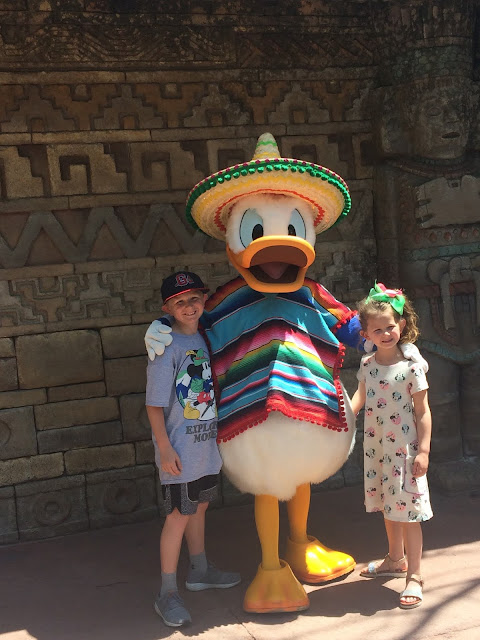 After Mexico, we wondered around World Showcase by shopping and snacking our way around the world.  Ha!  I wish that was real life.  We have yet to meet Mulan and were so sad when we missed her by about 3 minutes!! 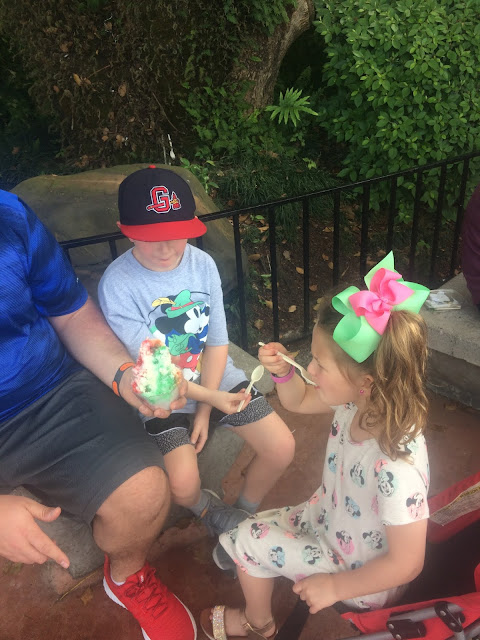 Last time we went to Epcot with the kids, we did a "walk through" of the countries and kinda agreed that it wasn't the best park for families.  When Eric and I went on our anniversary trip, we thoroughly explored the countries and had so much fun we visited multiple times on our trip.  This year, we were somewhere in between, which I supposed is reflective of where we are on this parenting journey as well.  We've got a tween boy and school-aged girl, and that's what I love about Disney.  Each visit is a new experience and there really is something for everyone in our family. 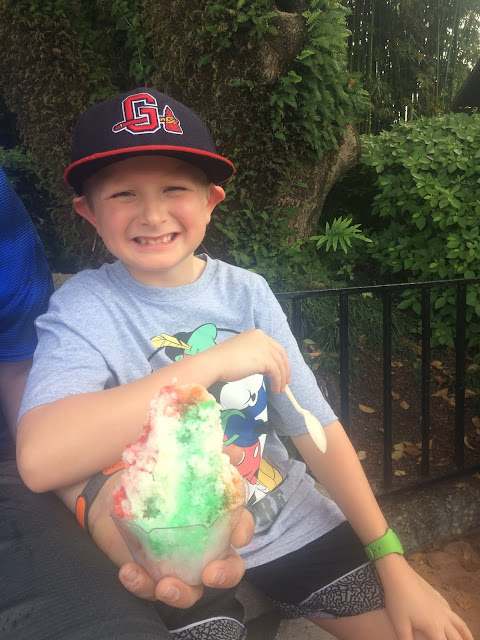 We had caramel in Germany, shaved ice in Japan, Macaroons in France, and we did lots of shopping in between.  We listened to music in America and of course met our favorite princesses along the way. 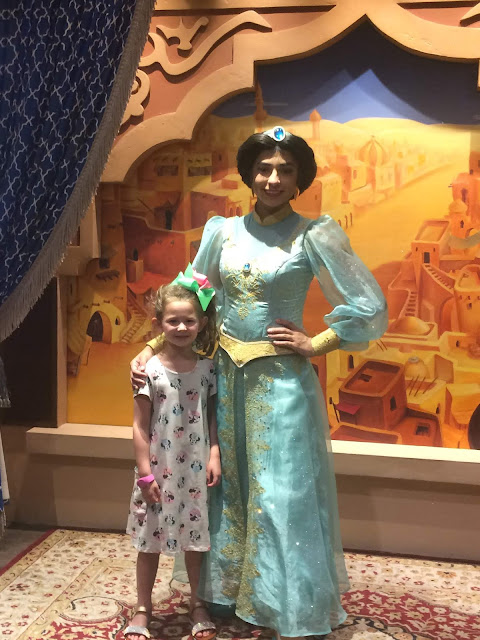 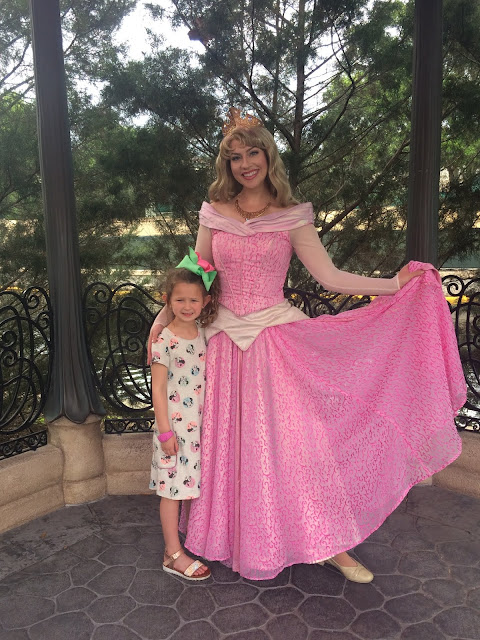 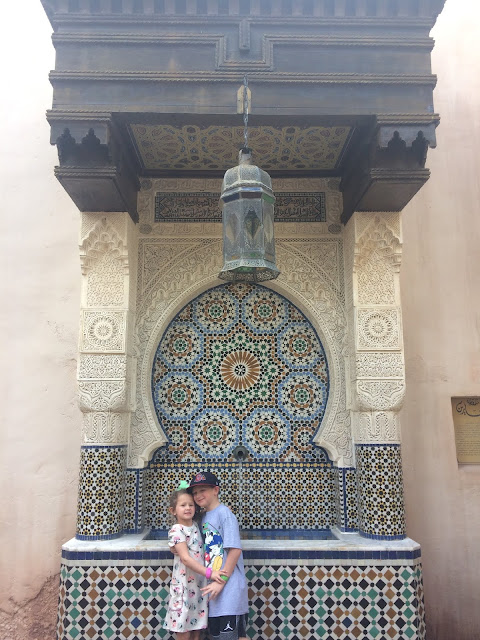 As I mentioned WAY back up at the top of this post, we were going to make a full-day out of the park, but the kids were exhausted and we didn't want to wear ourselves out too soon.  I say it all of the time, but it's so important to be flexible at Disney World! We heeded our own advice and headed back to the resort for some pizza and a swim before our early bedtime.

The first day was exhausting in the best kind of way!! 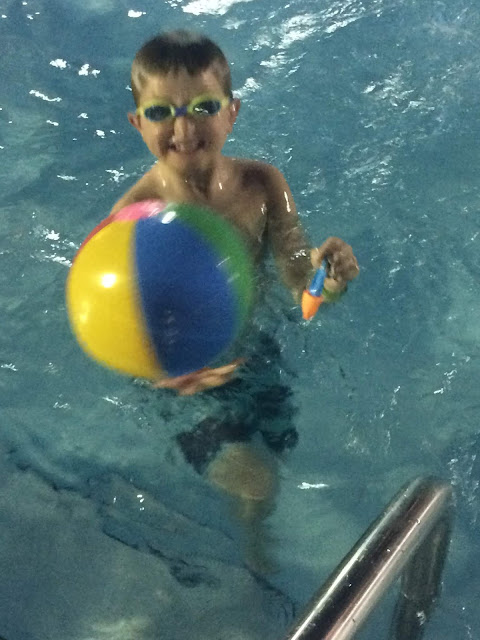