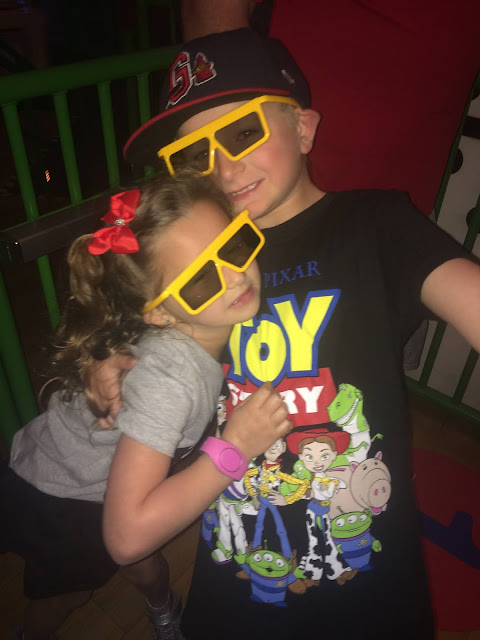 We spent our fifth day of the trip at Hollywood Studios! For our family, this is always a really easy park. We like to hit it early, leave after lunch for a rest/swim and then return for the evening.  I'm sure this will change when Star Wars Land opens, but for now, we enjoy the much slower pace. 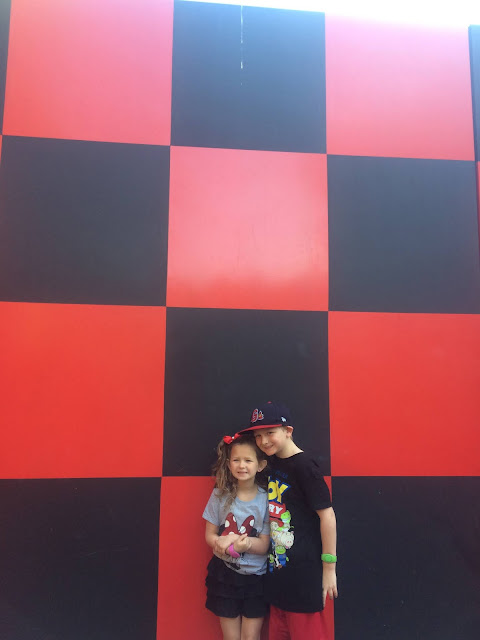 We hit the park super early so we could rope drop Toy Story Mania since we had a Fast Pass for Slinky Dog Dash.  It worked out beautifully because the standby line was only five minutes long while the masses ran (walked briskly) to the coaster. We took our time exiting the ride, taking in all the details and, of course, taking pictures with the themed walls. 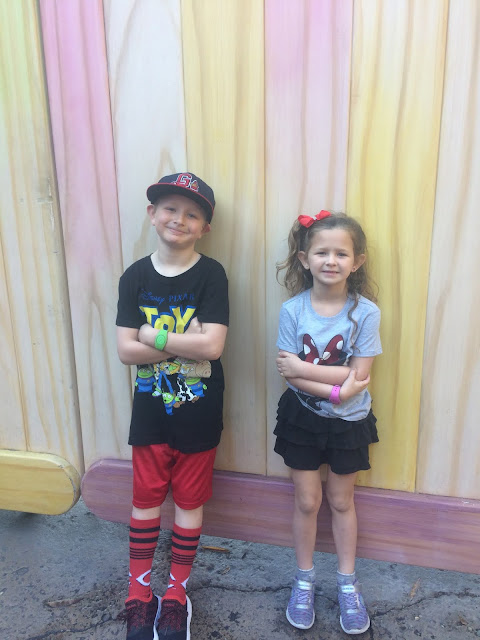 We had an early FP for Slinky Dog Dash, which was a first for the kiddos. Even with the FP, it was still a short wait, but the kids loved  the theming and activities while we were in the line. They gave the ride their complete approval as well!  After leaving the Slinky Dog Dash, we hit up a few favorites like The Little Mermaid and Indiana Jones while we waited for our next Fast Pass at Hollywood's Tower of Terror. 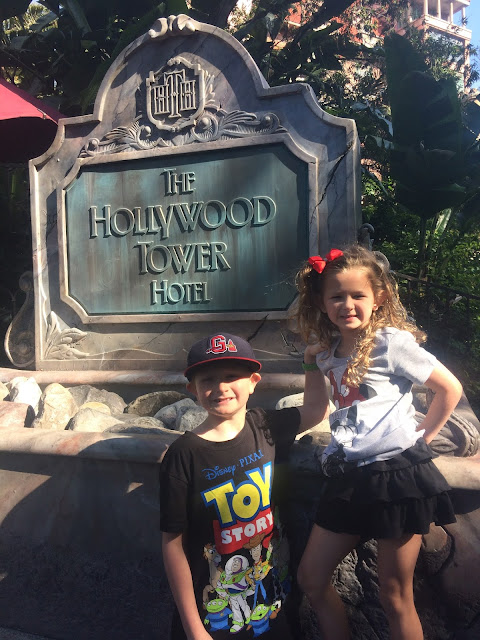 It certainly lived up to it's name and both kids were little nervous balls of energy waiting for the ride. This is the "before" picture.  Ellie loved it.  Eli hated it, and I treasured every minute of it with my family.  I know I've mentioned this before, but that's what I love about Disney.  Even though we go often, there are still new and exciting experiences no matter what the age. It was different than say their first flight on Dumbo but the excitement and joy were still there...and that is the magic of Disney.  Plus, gone are our days of rider-swap and taking turns with the kids. 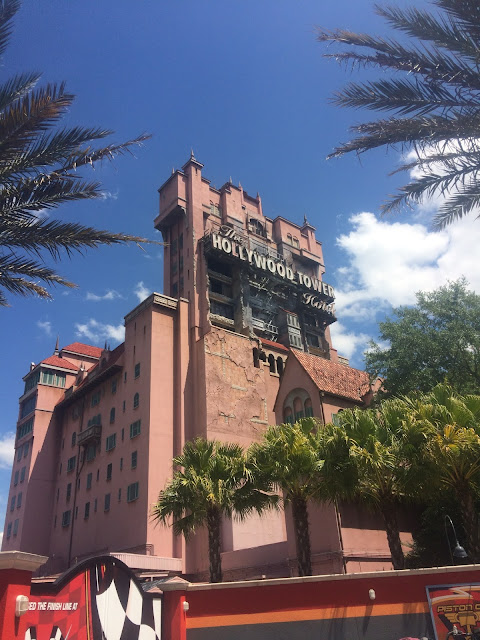 After Tower of Terror, we watched the Beauty and the Beast stage show, which was also a first for us.  The kids played on the Parks App while we waited which was a nice rest! I would give the show excellent reviews, although it wasn't my overall Disney favorite.  Nonetheless, it was a great escape from the crowd and also very entertaining.  We will be back for sure. 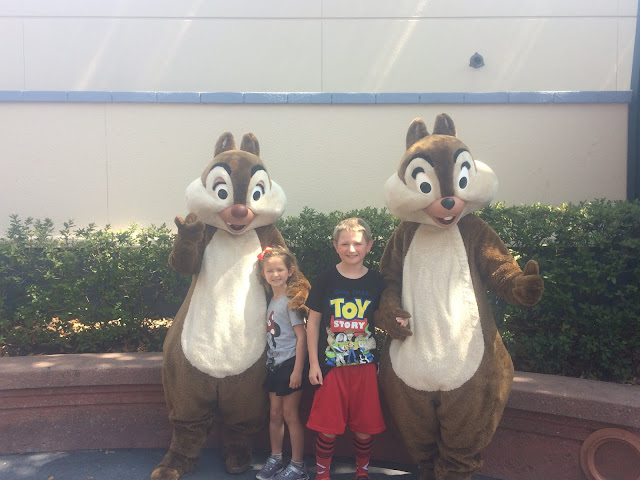 We met my siblings at ABC Commissary for lunch, and it was enjoyable.  Nothing outlandish, but a decent park meal. As we were leaving, we bumped right into everyone's favorite chipmunks!  This was a first for us as well.  The characters were super interactive and we had a great time learning how to identify them. By the way, Chip has the small black nose while Dale's is larger and more reddish in color.

After meeting Chip and Dale, we headed to the One Man's Dream Exhibit where we become Official Disney World Historians.  I'll share all the details about this hidden gem a little later, but my kids thought it was super cool to be added to the "Disney Book" of guests! 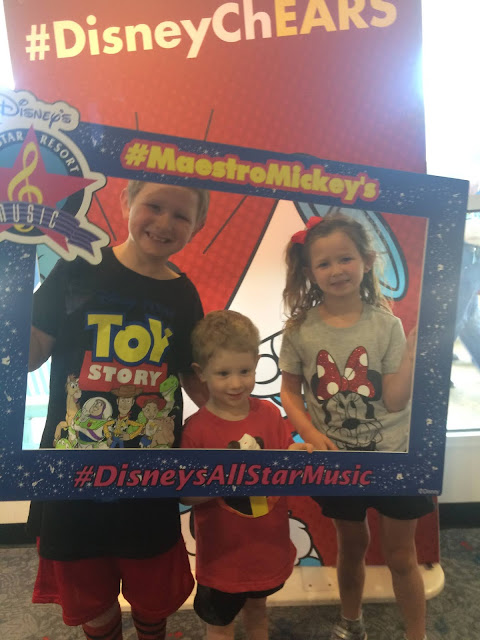 Next we headed to Rockin' Roller Coaster.  Eli refused to ride after his experience on Tower of Terror and Ellie didn't meet the height requirement, so Eric and I took turns sitting with the the kids while the other used a FP.

By this point we were tired and knew it would be best to take a little rest before trying to head back for Fantasmic! So it was back to the resort for naps and a quick swim. My sister-in-law and sister met me at the pool. The kids swam while the men and babies napped. I love that we built so much downtime into the plans.  It helped keep us refreshed. Plus, we skipped the busiest part of the day in the crowded parks.  The added bonus was that we really got to enjoy the resort so much more! 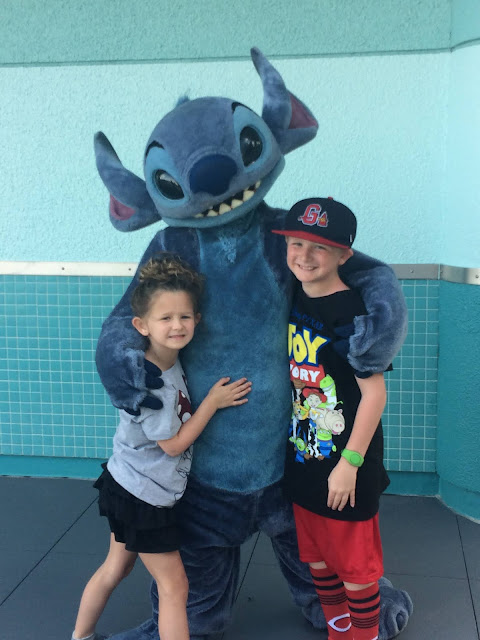 When it was time to head back to the park, we literally walked up to Stitch at the main gate.  There was no wait, and he was hands down the BEST character experience we've ever had. He took his time with the kids and was just a whole lot of fun.  He even played a few silly tricks and posed with the sleeping baby so his Momma would have a little picture to cherish. 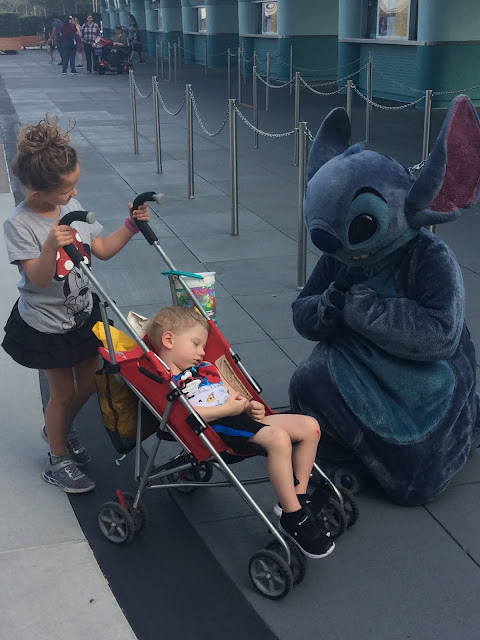 We did the Frozen-Sing-Along with the entire group and were lucky enough to get a back row seat where the kids could stretch out and be silly. As always, it was a super funny show that put us all in a great mood! I would highly recommend this attraction for kids of all ages. If for nothing else than a nice, cool, dark and comfortable place to escape the heat and crowds. 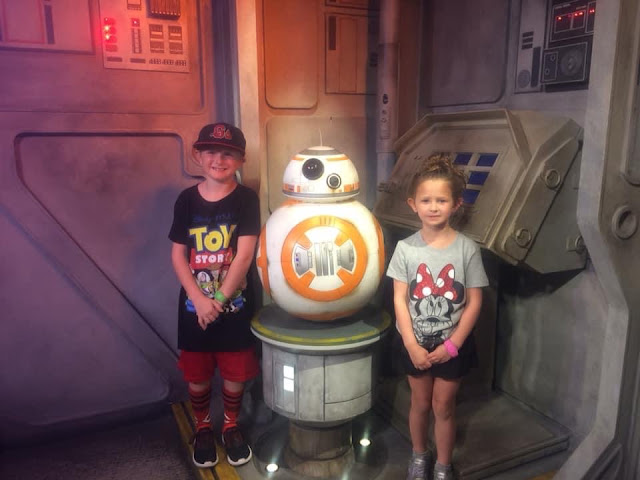 While my siblings and their families scattered to other attractions, we took out two kids to meet BB8 at Star Wars Launch Bay.  I'm not a Star Wars fan, but I was still impressed with the area and the options for families. Next we headed to Fantasmic which is our favorite night time show. We always arrive early, but unlike the other parades and activities, there is plenty of music and free entertainment while you wait. It goes a long way in passing the time quickly. 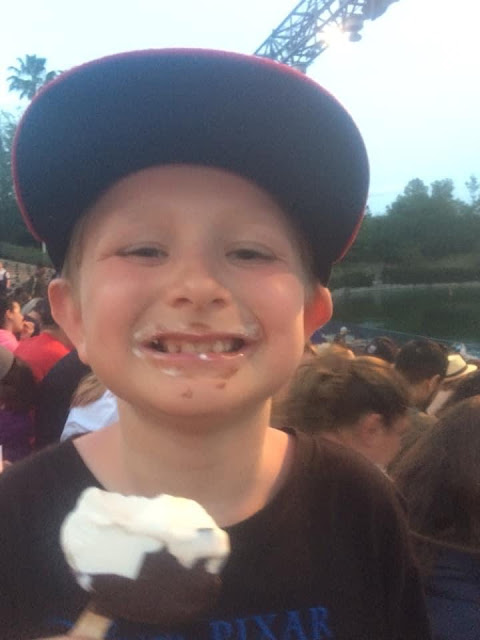 We got the kids Mickey Ice Cream while they waited, and this picture just warms my momma heart so much! We have one that's almost identical from Ei's first visit way back in 2010.  He may be getting big on me, but he's got a little boy left in him. 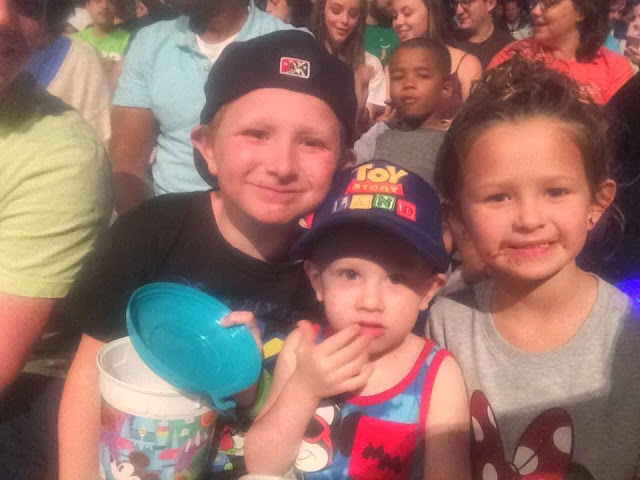 I cannot stress enough how amazing Fantasmic! is.  Do not miss this show.  Every single one of the kids in our group sat completely still from start to finish and they ranged from 3-11 years in age.  They were mesmerized, and I can't say that I blame them.  There's nothing better than this classic favorite to wrap up and amazing day!