Having a June birthday, I have had the privilege of celebrating my big day at Disney World on two occasions, and the same goes for our October wedding anniversary.  Eric, on the other hand, hasn't been quite as lucky with the birthday thing until this trip, and that April Fools Day baby finally got his chance!! 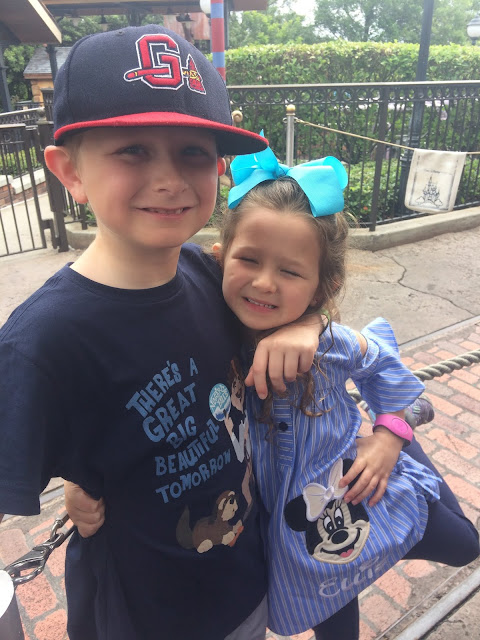 This particular day, I went against everything I preach and headed to Magic Kingdom on a Monday, the highest crowd day of our rip.  There was just no way around it in terms of planning, but it all worked out so well. Again, it was BUSY, like the busiest we've ever experienced.  But we found our groove and had the very best day starting with meeting my brother and his family.

The kids and I went through security and waited for Eric to make it through with our bag.  While we were waiting, we spotted my brother and his family.  It was great getting to catch up for a few minutes before the rope drop madness.  Sweet Austin was beside himself and about lost his little mind when he saw the castle.  There is truly nothing more magical that a child's first reaction! 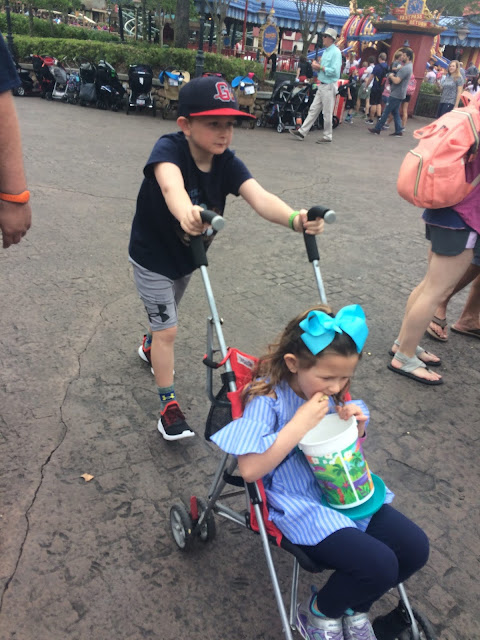 We separated to make our way to different areas during rope drop.  Eric, the kids, and I headed for Adventure Land and were among the first first to ride Big Thunder Mountain.  Would you believe that we hopped right off and boarded Splash Mountain? I couldn't believe our luck!  Again, ya'll, rope dropping is crazy but makes all the difference when it comes to time!

After that little adventure, we hit up Haunted Mansion with no wait and then made our way to Barnstormer.  The posted time was 15 minutes, but it was closer to 45!  It wouldn't have been that big of a deal if it wasn't the most boring ride on the planet!! Luckily, it timed up well with our first FP and we were able to walk over to Seven Dwarf Mine Train. 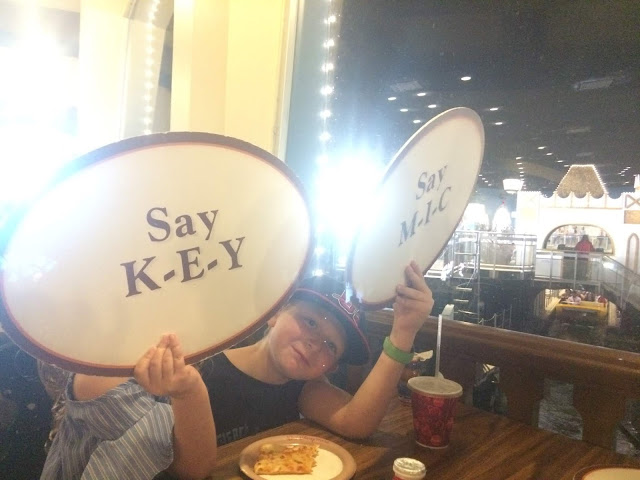 By this point we were tired and hit decided to hit up Pinocchio Haus.  It's a favorite AND it has a few tables that overlook It's A Small World.  The kids and I staked a seat close to the window and watched every move of the families seated in the coveted seats.  When one group finally left, we made our move just in time for lunch to arrive.  It's always fun waving at the riders, and this time Eli scored a sign to hold up.  Clearly, we need to work on our spelling. 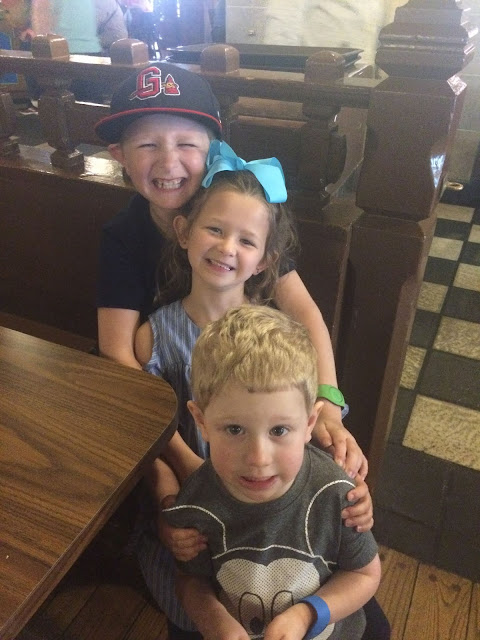 Austin, Clay, and Mandi came in as we were finishing lunch, so we caught up with them while they ate and then headed back out into the crowds to catch a few rides together before we had to split up again. 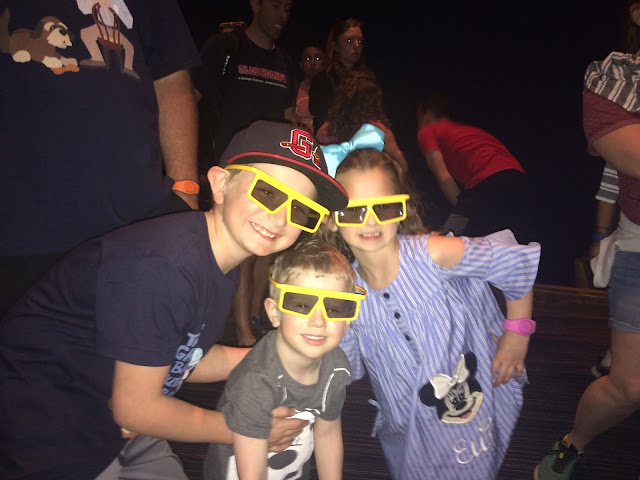 As I've mentioned several times, the crowds were intense.  There was no way we were willing to wait in some of the lines, so we decided to check out the less popular attractions and save the big ticket items for our FPs and for our last park day. 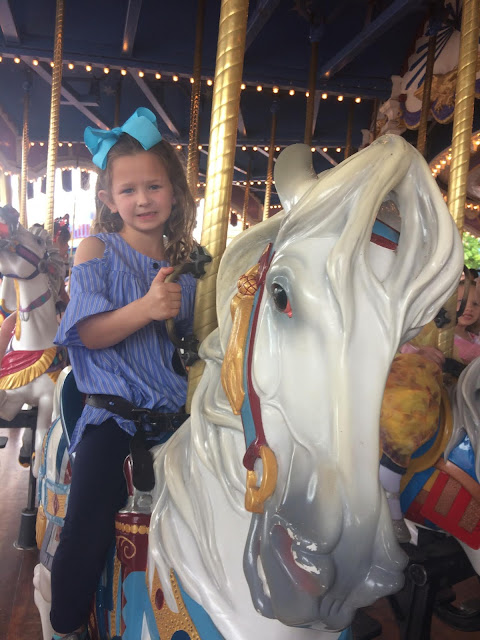 With this in mind, we hit up Prince Charming's Carousel.  To put things in perspective, this was a 20 minute wait.  Luckily, we all had FPs for Peter Pan, so we walked over to it once we were done. 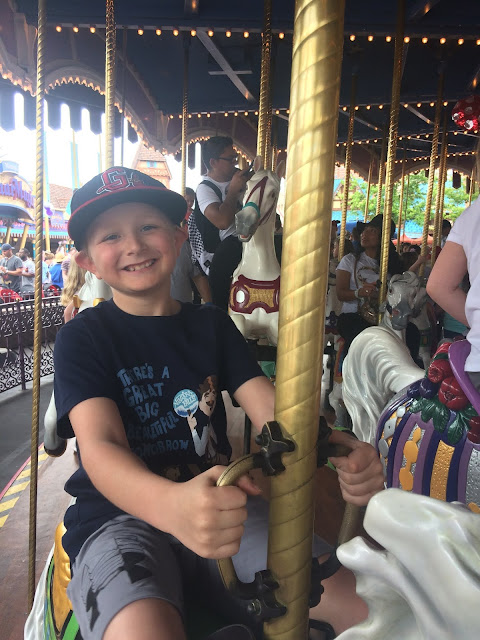 By this point it was about 2:00, which is peak crowd time.  I didn't want to battle them, Eric was ready for a break and Clay, Mandi and Austin were headed back for nap time.  We decided to leave with them and head to The Polynesian a little early for our birthday dinner! We knew it would be a dry, quiet place to escape the parks. 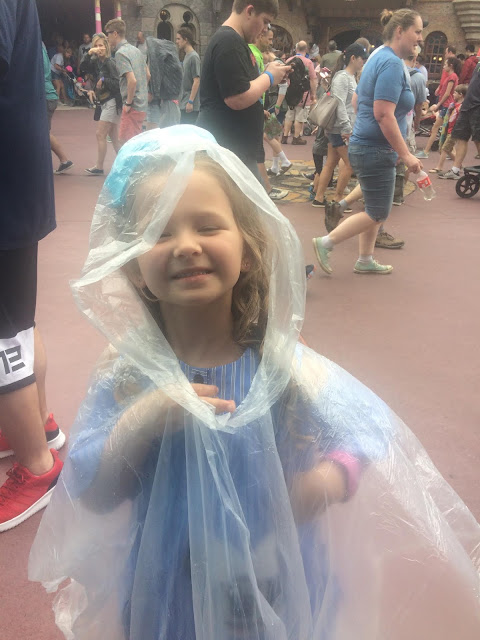 We rode the monorail over and then went to the common area outside the main building.  There was a TINY grass area, and of course, Eli and Eric found some toys that were perfect for a baseball game!  While they played, Ellie entertained herself with blocks and I propped my feet up on a nearby seat. 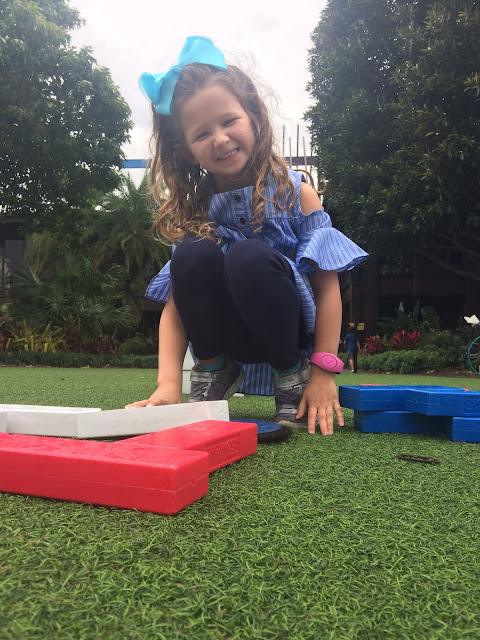 It's so funny how those little moments that seem boring or like you're just passing time end up being the ones that really stick out in your mind.  I think Eli will always remember playing baseball with Daddy at Disney World.  Funny enough, another father/son duo walked up and started doing the same thing.  I figured they were also a baseball family because of the instruction and sideways glances toward the "competition." Ha! 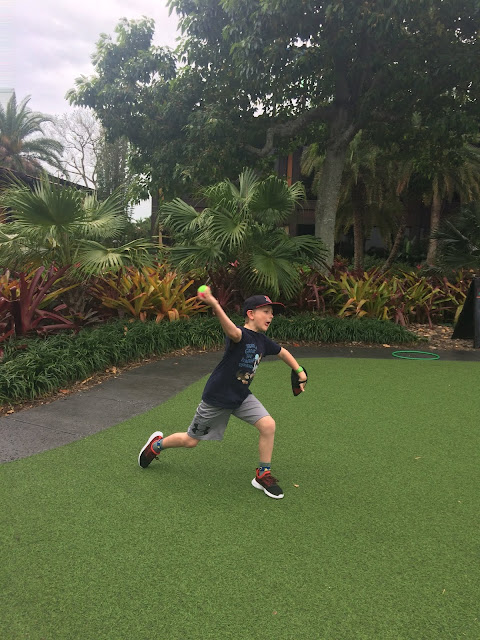 After about an hour, we went inside a little early to check in for our reservation.  Ohana is Eric's very favorite meal at Disney World, so it was a "must" for his birthday.  Of course, I will have a full recap of the restaurant later, but it really is worth checking out is you are visiting and especially if you are on the dining plan! 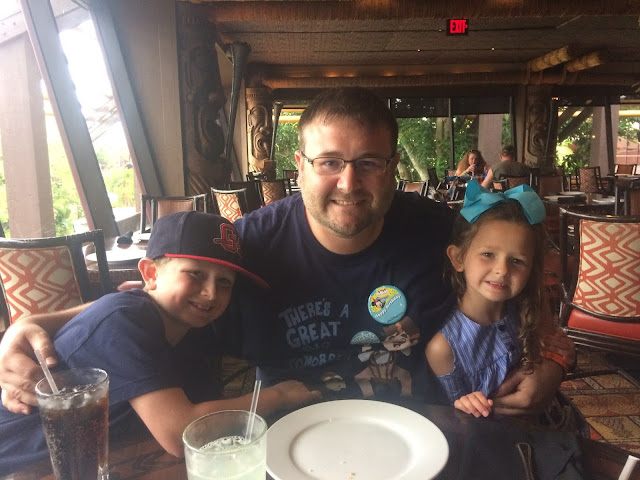 We had hoped that the crowds would have thinned out during dinner, but no such luck. They were as thick as ever, so we stuck with our plan of hitting up the less popular attractions and went to Carousel of Progress.  It's a must for us...a cool, quiet, escape from the crowd and a Disney Classic.  You can't really see Eric and Eli's shirts, but they are a nod to this family favorite! 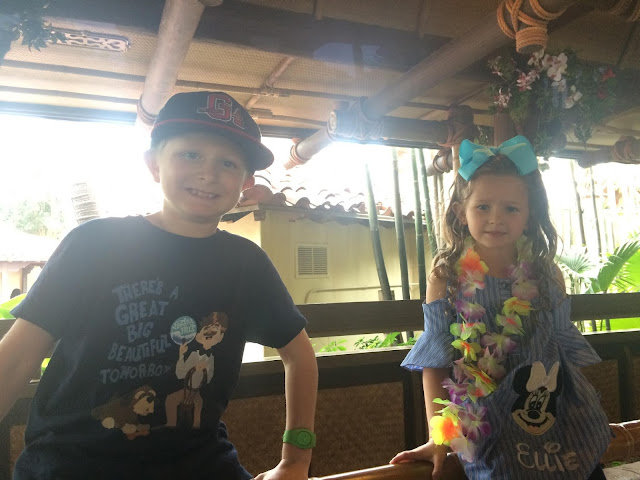 We walked over to Adventure Land for another classic, but less popular attraction...the Tiki Room. We enjoyed it while we waited for our FP on the Jungle Cruise.  Once we finished it, we walked over to Pirates, which had a 15 minute wait.  The night was still young, but we were TIRED!  So, we headed back to the hotel, settled in for another evening swim in the small pool outside of our room area.  We lucked out that my sister and her family arrived early enough for us to catch up with them before turning in for the night. 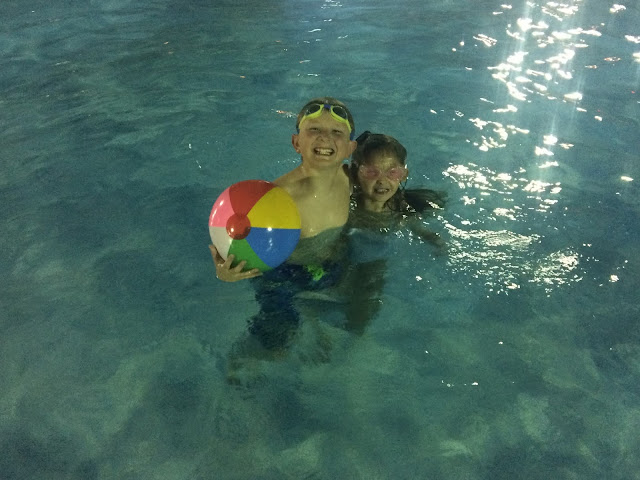