These Are Life Lessons 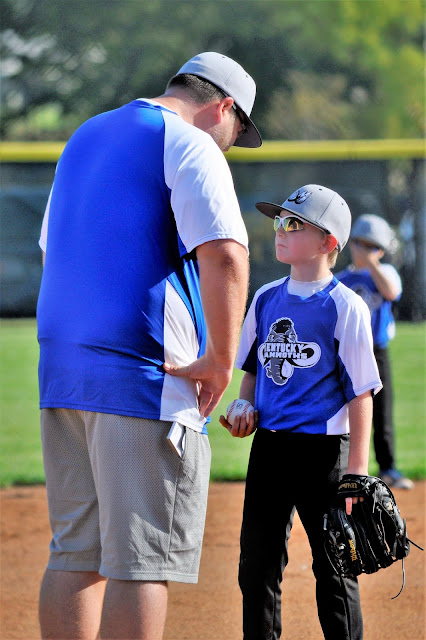 Have you read the poem "When You Give A Boy A Baseball?" If not, you should. It's sweet and sentimental and the kind of thing that will have a t-ball mom in tears just thinking about Senior Night.

It's also true, but if I'm being honest, it's just a picture of the sport through rose-colored glasses.

You see, I grew up in a football family and am far from an athlete myself, so my only exposure to sporting events was under the Friday Night lights of high school stadiums where it was perfectly acceptable to yell things like "Break their legs," or "Knock their heads off."  Trust me when I say that those phrases do not translate well into the baseball world, so it's advisable to omit them from your vocabulary.

My first experience with baseball, other than my brother's  t-ball team (which by the way, was played on fields at the local airport) came during my engagement as I accompanied by sweet husband-to-be to watch to his nephew play in the Kentucky World Series.  For starters, it was mid-July and I wore blue jeans.  I took no water, no snacks, no sun screen. I took nothing other than a tube of lipstick for touch-ups and a tiny baggie of grapes that I pack into my purse in case I got hungry during the game. Clearly, no one prepared me for the fact "game" was actually plural.  Let's just say that I was less than impressed with this thing they call "travel baseball."  As luck would have it, my nephew's team won and advanced into the next round.  This meant we got to stay all night.  But we had no clothes, and I had the priviledge of sharing a hotel bed with my mother-in-law since Eric and I were not married at the time. All is well that ends well, but let's just say that I was "baptized by fire" into this baseball world and none too impressed with the sport.

But that was all changed by a scrappy little blonde boy whose first word was "ball."  He carried bat and glove on every outing we took and was known to improvise with a walnut and stick.  He once threw an orange across the grocery store while I was shopping and has broken a tv while also putting a few holes in the drywall. He spent hours playing in the "sandlot" in our back yard and watched movies like "Rookie of the Year" and  :Angels In The Outfield" obessively.

He could throw rocks into the air and hit them with a bat before he turned three years old.  He was a standout in t-ball, which basically means he knew which direction to run bases, and his Pee Wee team made it to the finals where they played on a college campus.  At seven he was asked to join a travel team, and through it all, he never stopped loving the game.

It's what made is momma cheer and his sister proud.  It's the bond he shared with his daddy.  It was the "normal" in our lives when things were anything but normal.  It's what drove him through the injuries and the batting slumps, through the losses and wins.

And then, that light slowly dimmed.

Yesterday, I was expressing my frustration at this whole charade as the dugout started to clear out, and that's when  I looked cross the field and saw a defeated young man standing where that confident blonde boy had stood not so long ago.  After after taking a few minutes to catch my breath, I looked into  eyes of a nine year old and asked him if it was time to walk away from the game.  First he said, "yes," but no sooner had the words escaped his lips before doubt shadowed his eyes.  The emotional struggle was written all over his face when he grabbed by hand and said, "Mom, I don't really want to quit.  I just want to do better."

And that's when it clicked.  Baseball (or any activity for that matter) isn't about the wins and losses. It's about everything that happens in between.  We say it all the time, but do we mean it?

One day, he won't be standing at the plate waiting to swing his bat.  He will be standing in the conference room waiting to share his project.  His team won't be made up of dirty-faced little boys but of tie-wearing colleagues hoping for success.  He won't stand on the mound taking a deep breath to focus before he throws a pitch.  Instead, he will take those same breaths as he focuses on meeting a deadline or presenting a project.  The WE will be more important than the ME, and he will have baseball to thank for that.

When he strikes out again and again as he works his way through life, he will know how to adjust.  He won't "choke up and get on it early," but he will know how to battle.  He won't let the fear of striking out get in his way. He will know that there are others who are more talented than he is, but that hard work makes the victory so much sweeter.

So as we battle through this season, I will choose to see the teachable moments because after all, the nine year boy will soon be a man.  Win and losses won't matter but the lessons learned on the field will carry him through a lifetime.
at 9:21 PM